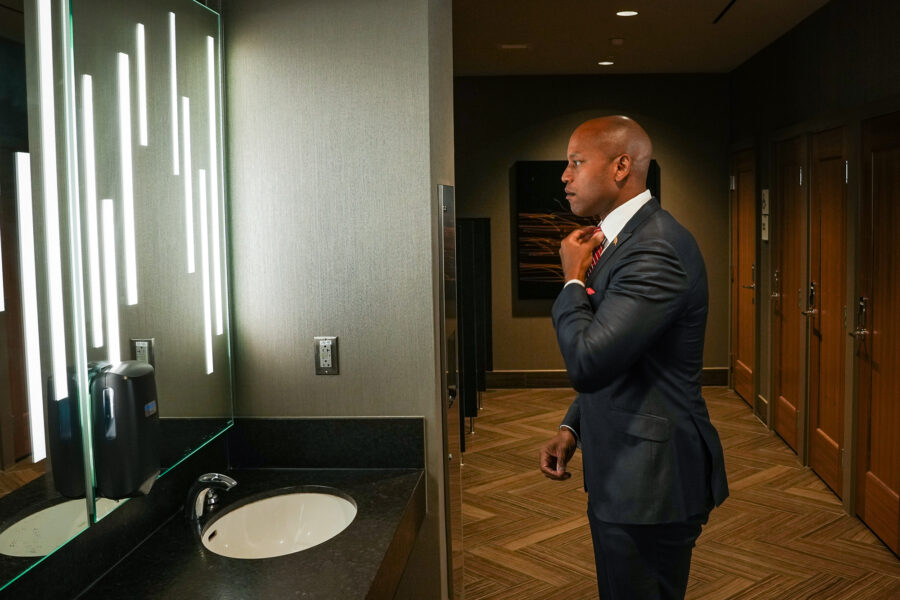 Wes Moore is on the rise — and some of the Democrat’s close allies already have their sights on more than just the Maryland governor’s mansion.

Moore is poised to become just the third elected Black governor in U.S. history if he holds onto a wide polling lead in Maryland. He may well be the nation’s only Black chief executive in the country next year.

Accomplishing that feat comes with lofty expectations from a Democratic Party hungry for a new generation of leaders. Moore would also enter the governorship under intense scrutiny: a political neophyte promising to usher in an era of transformation in his first elected gig.

If such a high-pressure debut seems like cause for caution, his supporters aren’t tempering their enthusiasm.

Moore has racked up a slew of endorsements, including a rare political nod from Oprah Winfrey. Democratic luminaries are drawn to the energy and charisma he displays on the trail running for the state’s open governorship. 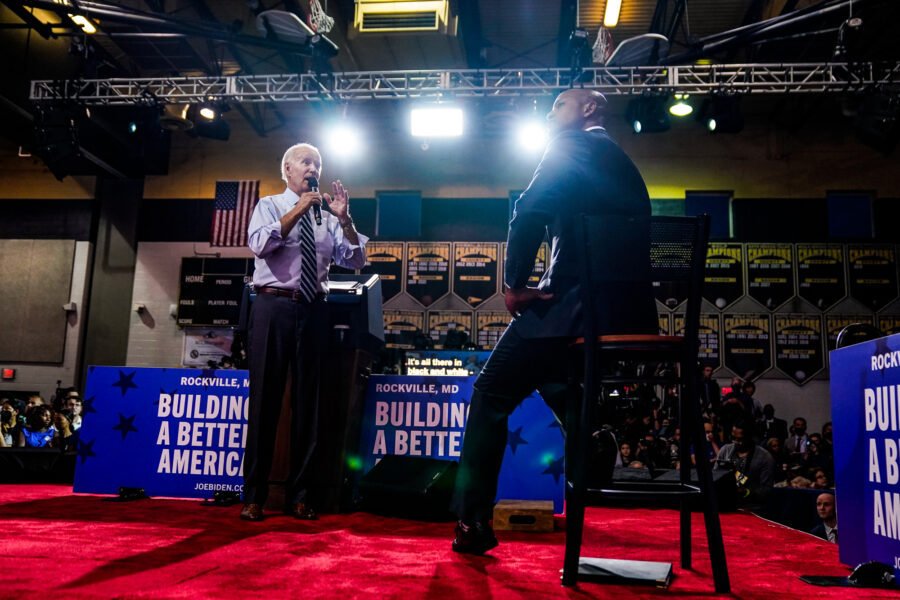 Even President Joe Biden chose a Democratic Party event in the Washington, D.C. suburb of Rockville as his unofficial midterm campaign kickoff. There Biden heaped praise on Moore, the former head of the Robin Hood Foundation, the anti-poverty nonprofit, as well as a captain who led troops in the Army’s 82nd Airborne Division in Afghanistan.

“Wes is the real deal. The real deal, folks. He’s a combat veteran. Only drawback is he’s a Rhodes Scholar,” Biden joked. “Former CEO of one of the biggest anti-poverty organizations in America,” he continued, “and if we all do our part, the next governor of Maryland.”

And while the president made no mention of his former boss, others in the party can’t help but compare Moore, a moderate, to the nation’s first Black president. House Majority Leader Steny Hoyer not-so-subtly reached for not one, but two former presidents as comparisons when asked about Moore’s experience.

“Ronald Reagan didn’t have much experience before he became the governor of the largest state, except as an actor. Barack Obama had a few years [in the U.S. Senate],” said Hoyer, the No. 2 Democrat in the House, deflecting criticisms raised about Moore.

Moore’s been slammed during the campaign as unequipped to meet Maryland’s challenges, having never worked in government before, and he’s been labeled as a “phony” by his Republican challenger for being untruthful about how long he’s lived in Baltimore, embellishing parts of his biography in his best-selling memoir, “The Other Wes Moore.”

These projections being placed on Moore can be heavy for any candidate, particularly for someone new to the political arena.

It also speaks to the rarity of Black candidates getting elected to statewide posts, which are typically seen as a springboard for any future run for the Senate or the White House. The Moore candidacy highlights Democrats’ craving to find a class of leaders that is younger and more diverse than its current crop of long-tenured party heads, one that can help excite the base.

If there’s anyone working to tamp down on the torrent of future expectations however, it’s Moore himself. He has made clear that he plans to serve two terms in office if elected governor. Nodding to that promise, Moore frequently peppers stump speeches and interactions with voters with phrases like, “This is truly going to be Maryland’s decade.”

Moore, who turned 44 over the weekend, often redirects talk about his own trailblazing candidacy to more broadly speak about the history-making Democrat ticket he’s on. One that includes Aruna Miller, the nominee for lieutenant governor who would be the first woman of color and immigrant elected to statewide office; Brooke Lierman who would be the state’s first woman comptroller; and Rep. Anthony Brown (D-Md.), running to become the state’s first Black attorney general. 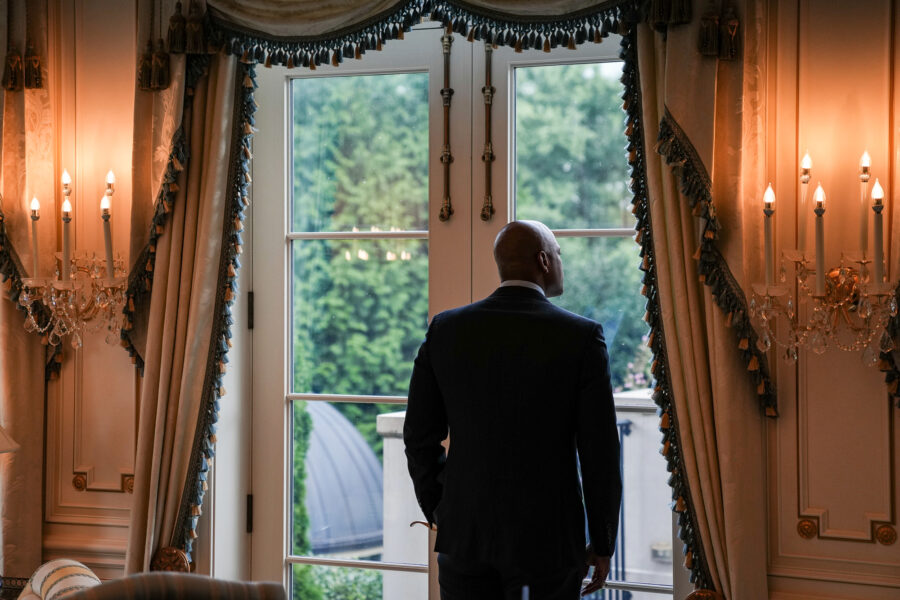 Moore does acknowledge the history he’s attempting to make — but is quick to pivot to policies he hopes would define his tenure as Maryland’s chief executive.

“It’s dawned on me,” he said in an interview. “It’s something I do take a sense of pride in.”

Deval Patrick, the former two-term Massachusetts governor, said he understands the pressure of constant speculation — and elevated aspirations — from outsiders. Patrick, along with Douglas Wilder of Virginia, are still the only elected Black governors in U.S. history.

“If I thought that Wes was interested in being governor because he wanted to be something else, I’m not sure I would have taken your call,” Patrick, who ran for president in 2020, said in an interview.

Patrick has been advising Moore on how to block out the distractions. He doesn’t doubt Moore could play a prominent role in the party — but says he must keep focused on the task before him. That’s how he’ll earn future opportunities.

“You can’t let that stuff go to your head,” Patrick adds. “He’s interested in being governor and being the best governor for all Marylanders. That is exactly the kind of person I want to support. And it makes me proud that he is a Black man running for the job.”

Moore is also running a broad base campaign in a blue state where voters have elected Republican governors in three out of the previous five election cycles.

“There is stuff for progressives to like and there’s stuff for moderates to be comfortable with,” said Mileah Kromer, who heads the Sarah T. Hughes Center for Politics at Goucher College, which has conducted public opinion polling on the campaign. Maryland voters don’t view Moore as somebody who is going to raise taxes or will ultimately shift to becoming a socialist or far-left candidate once in office, Kromer said. 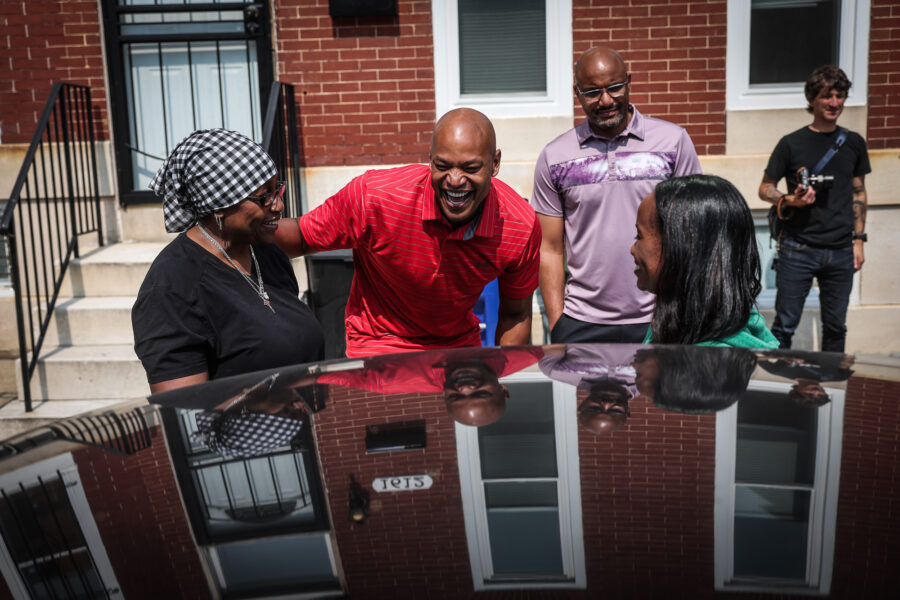 Moore’s policy positions bear that out. While his Republican challenger has attempted to label him as someone who would defund law enforcement, Moore is calling for boosting resources for state law enforcement agencies. Instead of championing “Medicare for All,” he’s pushing to reduce barriers to Medicaid enrollment for low-income Marylanders.

While 36 states are holding gubernatorial elections this fall, only a handful of them feature Black nominees: Stacey Abrams in Georgia, Deidre DeJear in Iowa, Yolanda Flowers in Alabama, Chris Jones in Arkansas, and Moore — all Democrats.

Aside from Moore, Abrams is the only Democrat within striking distance of their Republican opponent, but she trails incumbent GOP Gov. Brian Kemp by the low single digits in most polls.

Moore has largely been untested since winning his primary this summer.

While he’s laid out detailed policy proposals on improving the state’s transportation, education system and climate, it’s unknown how he’ll respond to challenges including working with the state legislature or dealing with violent crime in places like Baltimore which is on pace to top 300 murders for an eighth straight year, according to database from The Baltimore Sun.

But Moore is still operating in comfortable political territory for now. He led by 32 points in a Washington Post/University of Maryland poll out earlier this month. That’s even larger than the advantage Moore had over Republican Dan Cox in aBaltimore Banner/WYPR/Goucher College survey in September where the Democratic nominee was up 22 points.

Cox has been disparaged by the state’s popular, term-limited incumbent Republican Gov. Larry Hogan as a “Q’Anon whack job.” Hogan has publicly announced hewon’t support Cox in the fall.

Maryland’s GOP nominee has called into question the results of the 2020 presidential election and, at last week’s gubernatorial debate, refused to say if he’d accept the outcome of his own election against Moore.

“At this point, it would be similar to saying that before a surgery takes place … [deciding] whether or not the surgery went well,” Cox said, while also calling for reparations for business owners hurt by lockdowns at the height of Covid-19 pandemic.

Cox enjoys the support of former president Donald Trump and held a fundraiser at Mar-a-Lago on Monday. Moore, meanwhile, is scheduled to hold a fundraiser with former Democratic presidential nominee Hillary Clinton on Thursday.

Despite his polling lead and the broad campaign he’s running — centered around tackling income inequality in the state, with a campaign slogan of “leave no one behind” — some backers are already concerned that Moore’s every move as the state’s chief executive will be judged by an even higher standard than usual because of his race. 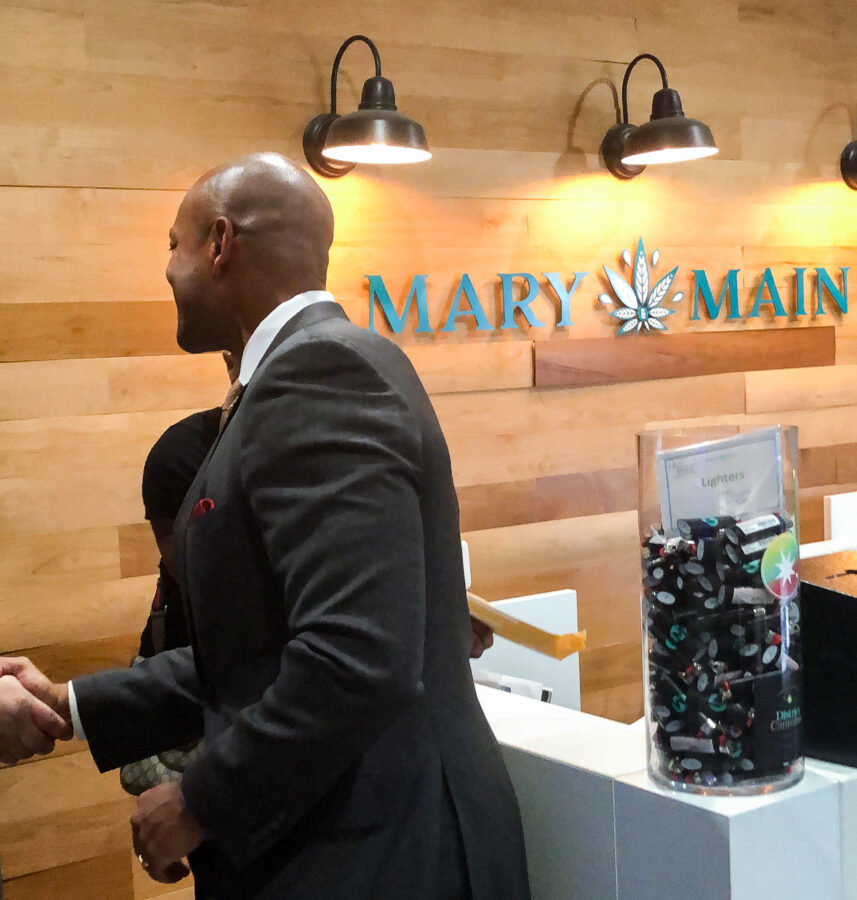 At a campaign stop this month in Capitol Heights, Md., Moore took a tour of the facility of Mary & Main, a Black-owned dispensary, which bills itself as a premium medical cannabis supplier. The aromatic lounge area featured edibles, creams and several flower strains with names such as Georgia Pie, Cake Mix, Cheetah Piss and Gary Payton.

The event unfolded the same afternoon that Biden announced pardons for all citizens convicted of simple marijuana possession under federal law. It also took place against the backdrop of Maryland voters considering the Question 4 ballot measure legalizing marijuana for recreational use for adults 21 and older. It’s supported by nearly 3 out of 4 voters, according to recent polling.

“This is a very special moment,” Moore told the group about the upcoming election and the prospects of full legalization in Maryland. Currently, only medicinal weed is legal in Maryland.

“I don’t think that’s by accident, that in this time that Maryland is going to have a new governor and lieutenant governor, new attorney general and comptroller, that it’s actually the most appropriate time for our state … to be moving forward in this conversation,” Moore said.

The assembled business owners were excited about Moore’s visit. “This is the first time we’re going to have a Black man in office, who is a Democrat that’s going to talk about cannabis that knows anything about it,” Christina Johnson, the CEO of Standard Wellness Maryland, a local cultivator, told Moore.

But in an interview, Johnson expressed concern that glitches in how the state’s recreational program is implemented, which is set to roll out next summer, will likely result in unnecessary blowback for Moore.

“Wes cannot afford to not have his finger on the pulse of this thing, because he’s Black,” Johnson said, following the roundtable. “Wes’ [handling of the rollout] is going to be … hyper-scrutinized because of the color of his skin, period.”

With Election Day quickly approaching, some Democrats are cognizant of historic trends that haven’t always been kind to the party in Maryland. 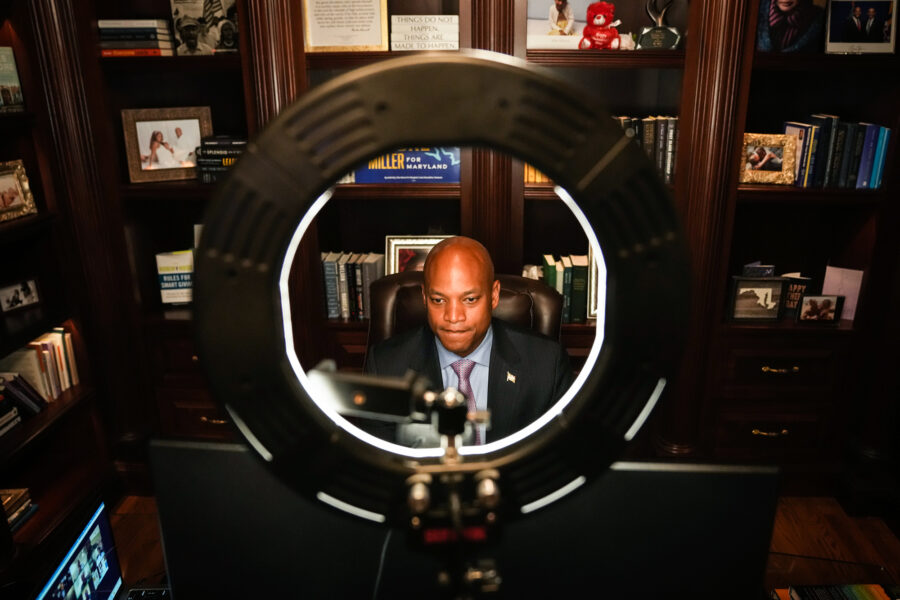 Anthony Brown, the current nominee for attorney general, was one of them and ran at the top of the ticket in 2014 after serving two terms as Democrat Gov. Martin O’Malley’s lieutenant governor.

He lost that year’s election in a surprise upset against then-relatively unknown Larry Hogan, the current governor, who won by roughly 66,000 votes.

While Brown says he looks forward to working with a Moore administration, “scaling up” investigations in the state, particularly on environmental protection issues, he also is mindful of lessons learned from his failed gubernatorial run campaign eight years ago.

“The lesson learned from 2014 is to focus on core Maryland values,” Brown says, which include kitchen table issues like schools, a strong vibrant local economy and strengthening protections within the state on abortion access.

“So speak to those core values that are important to Marylanders, don’t spend a whole lot of time focusing on our polling,” Brown says.

Chris Cadelago contributed to this report.