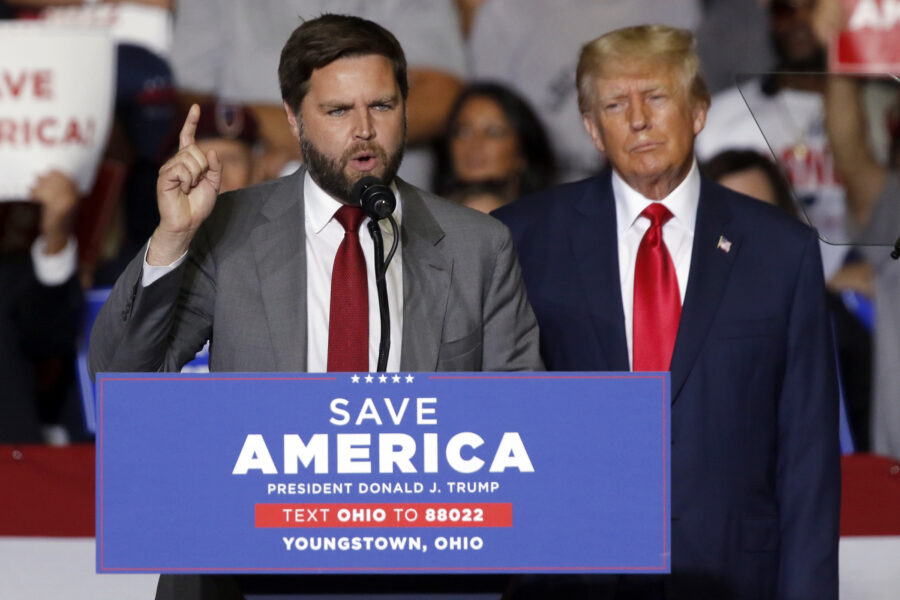 The final debate between Ohio’s Senate hopefuls on Monday night got so ugly that it was mildly surprising to see Republican J.D. Vance and Democratic Rep. Tim Ryan shake hands at the end.

Locked in an extraordinarily tight race, Vance and Ryan battled over who was the bigger “ass-kisser” or “suck-up” to their respective party leaders. It was a fitting finale for two candidates who appear to only barely tolerate each other’s presence and a marked break from the mild-mannered persona cultivated by the man they’re trying to succeed, retiring Sen. Rob Portman (R-Ohio).

Though Ohio has trended red for two straight presidential election cycles, the Buckeye State’s surprisingly close contest could determine who controls the Senate next year: Chuck Schumer or Mitch McConnell. Vance is putting up narrow recent polling leads against Ryan, yet the Democrat is keeping Ohio one of the map’s closest races down the stretch. And their debate’s regular nasty turns reflected the huge stakes for both men as they made one last case to voters from Youngstown, Ohio, which Ryan represents in Congress.

For the second straight debate, Ryan went after the Donald Trump-endorsed Vance for being too close to the former president. To drive his point further this time, Ryan said that Vance, once a prominent Trump critic, was “calling Trump America’s Hitler. Then he kissed his ass.”

Vance responded by linking Ryan as many times as possible to Speaker Nancy Pelosi, arguing that his rival’s image as a moderate in Ohio campaign ads defies a voting record that’s in line with national Democratic leadership. Although Ryan once challenged Pelosi for House Democratic leader, Vance simply repeated the line that Ryan “votes with her 100 percent of the time.”

Both Ryan and Vance are unique candidates: The Democrat is a former presidential aspirant who is tacking toward the center and vastly outperforming his party’s gubernatorial nominee, while Vance is a political novice best known as the author of the bestseller “Hillbilly Elegy.” Yet their race has become nationalized as November creeps ever closer, with Trump and Pelosi often taking top billing.

With no Vance voting record to attack, Ryan is seeking to cast his opponent as subservient to Trump and GOP donor Peter Thiel, who spent $15 million to get Vance through the primary. Meanwhile, Vance uses Ryan’s Democratic voting record as a cudgel in a state where his rival needs to bring home Republicans to win.

Vance contended that Ryan’s “entire campaign is based on sucking up to the National Democratic establishment” and that Ryan “says he’s reasonable, keeps saying he’s a moderate … but when he gets to Washington, he votes the opposite way.”

That focus on the House speaker was not lost on Ryan.

The two men break sharply on a host of issues: Vance endorsed a 15-week abortion ban that some others in the GOP have avoided, while Ryan supports a bill to expand abortion rights; Ryan backed the bipartisan gun safety bill this summer, while Vance opposes its strengthening of so-called “red flag” laws.

But it was a question about the racist Great Replacement Theory, which falsely asserts that minorities are an existential threat to white people, that elicited the most heated exchange during the debate.

Vance was asked Monday about his past warnings of immigrant influence, replying that Democratic leaders are “very explicit about that, they say they want more and more immigration because if that happens, they’ll ensure that Republicans are never able to win another national election.”

Ryan called the theory “nonsense,” then slammed what he called Vance’s embrace of it: “This is who he’s running around with, talking about replacement theory.”

Vance responded that Ryan’s attack was “shameful” given that his biracial children would get attacked by “scumbags” online because of the Democrat’s rhetoric.

Then he pivoted back to tying Ryan to Pelosi and Schumer.

Vance will clearly be more conservative than Portman, who has supported bipartisan deals on infrastructure, gun safety and even a failed independent commission to investigate the Capitol attack by Trump supporters. Vance has Portman’s support but a harder edge than the genteel incumbent, who won his 2016 reelection campaign by 20 points.

Vance praised Portman for his work on mental health, while Ryan — who was endorsed by a former Portman chief of staff — repeatedly invoked the incumbent.

“I’m not quite sure why Rob Portman endorsed you,” Ryan told Vance on Monday night, “because you don’t agree with any of the compromises he’s been able to make over the last year.”