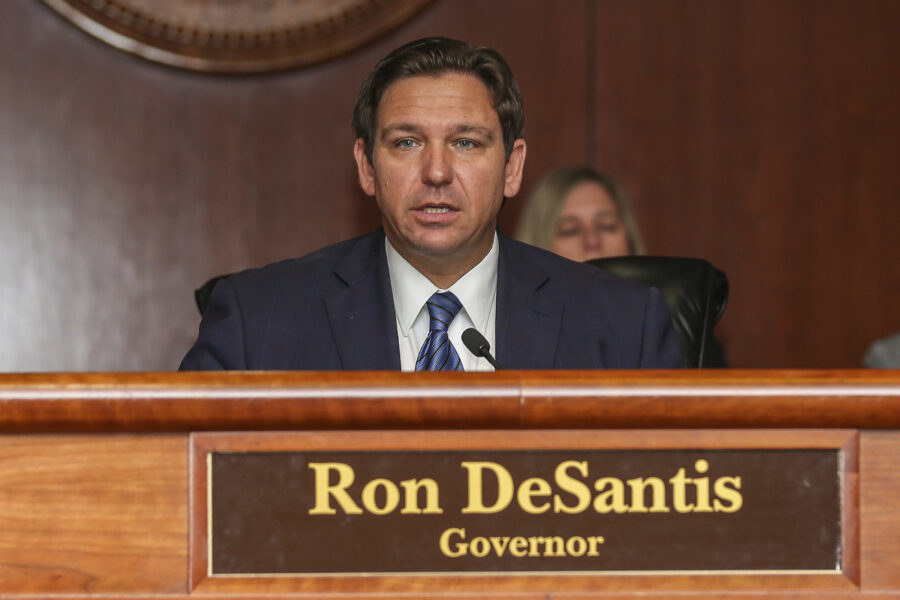 But they are doing more than just lambasting universities and colleges for perceived liberal bias.

DeSantis and Florida Republicans, in an attempt to reshape the state’s 40 colleges and universities, installed GOP allies in top university posts and pushed legislation that could change tenure, limit how university professors can teach lessons on race and even how Florida higher education institutions are accredited.

Most recently, the governor’s chief of staff helped Sen. Ben Sasse (R-Neb.) navigate the University of Florida presidential selection process, ultimately assisting the senator in becoming the sole finalist to lead the state’s flagship university, a move that caused hundreds of University of Florida students this week to protest.

DeSantis over the summer also appointed a top GOP legislative ally, state Sen. Ray Rodrigues, as Florida’s chancellor for higher education — a position from which he will wield enormous power over the state’s 12 public universities.

“They want to take over higher education, and this is one way to do that,” Andrew Gothard, president of the United Faculty of Florida union, said of Sasse’s selection as a finalist to lead the state’s flagship university. Gothard is a faculty member at Florida Atlantic University.

Conservatives in recent years developed an antagonistic relationship with academia, viewing college campuses as proving grounds for progressivism. And, fueled by the populist movement that elected Donald Trump, many Republicans have declared war on elitism — and used higher education as a symbol of what they’re fighting.

But DeSantis, considered a leading contender for president in 2024, seems to be taking the notion a step further. The governor and GOP state lawmakers are expanding Republican efforts to reshape K-12 education in America, an undertaking that DeSantis has made a key pillar of his agenda.

The governor has pushed legislation that would allow parents to sue schools if they teach critical race theory in classrooms, prohibit teachers from leading classroom discussions on gender identity and sexual orientation for young students and reject math books that contain elements focused on race- and “social-emotional learning.”

Many of these GOP-backed laws drew condemnation from Democrats and teachers’ unions, who accuse Republicans of politicizing children’s education. But they are also proving popular among conservatives and in particular many parents that have grown frustrated by their local education systems.

Some of DeSantis’ higher education moves have also sparked a backlash, including Sasse’s pick as a finalist to lead the University of Florida. His selection was aided by a new law that shields university presidential searches from Florida’s public records law, ending a tradition of open searches for the coveted and pivotal roles. The change in law was made possible by Florida’s Republican majority in the Legislature, but several Democrats also supported it since it needed a supermajority to pass.

The new law, which Democrats and union leaders are criticizing, makes private all personal identifying information classified for candidates seeking college or university president posts. Names, however, must be unmasked either 21 days before a final selection is made or when a finalist group emerges.

“We would have never gotten a sitting U.S. senator or multiple sitting presidents at … universities to apply without the search exemption,” said Rodrigues, the new higher education chancellor, who for years led efforts to pass the legislation. “I think it’s accomplished its goal.”

Faculty, students and Democrats, however, are raising questions about the selection process and want university officials to release the names of other top finalists, something the school is not bound to do.

“Every student frustrated with the way UF’s presidential finalist was chosen should understand that this unfolded exactly by design,” Democratic state Sen. Lori Berman, who opposed the legislation, tweeted Monday. “Florida Republicans passed a law to drape the search process in secrecy, giving you, the student body, less ability to weigh in and speak out.”

The legislation clearing the way for Sasse’s pick was one of several bills that ushered in changes to Florida’s higher education system in 2022.

Florida colleges and universities are searching for new accreditors in light of a state law passed by the Legislature this year that requires schools to find a new accreditation board by their next cycle.

Accreditation agencies generally ensure higher education institutions meet standards of quality. Florida Republicans, led by DeSantis, argue that they have too much authority over the state’s schools.

Florida’s new law requiring the state to find a new accrediting agency was spurred partly by fights between higher education leaders and lawmakers and Florida’s longstanding accreditor, the Southern Association of Colleges and Schools Commission on Colleges, or SACS.

Those conflicts included SACS opening an investigation into the University of Florida after the school blocked three professors from testifying as expert witnesses in a federal lawsuit challenging a new law that places restrictions on mail-in ballots and drop boxes. The GOP-backed Legislature approved the voting law at DeSantis’ request.

Conservatives across the country, like the National Association of Scholars, praised Florida for “its effort to reform such a vital — and woefully broken — component” of higher education. They claim that accreditors are abusing their power by imposing political views and interfering with university governance.

Florida is also facing several legal challenges to one landmark piece of legislation requested by DeSantis, the “Stop-WOKE” Act, which targets how lessons surrounding race are taught in classrooms and the workplace. In one of the lawsuits, conservative free speech group FIRE argues that the law makes professors unsure about which lessons are “government-approved” or could result in punishment, including termination.

The new law, according to FIRE and other critics, constrains the ability of professors to play devil’s advocate and forbids them from “advancing” viewpoints even for the sake of Socratic discussion. And aside from race, faculty members are concerned about even broaching other topics like gender out of fear they could ultimately lose their jobs.

“It’s having a really far-reaching effect on the stifling of speech from what I hear from the colleagues who are consulting with me,” said Robert Cassanello, a professor at the University of Central Florida who teaches classes on the civil rights movement, emancipation and the Reconstruction era and is a plaintiff in one lawsuit.

Lawmakers and state higher education officials, however, contend that the law doesn’t outlaw any specific curriculum.

“It’s very clear what the act prohibits – you can’t place guilt on individuals for actions committed by others or by prior generations,” Rodrigues, the new higher education chancellor, said. “I would submit we should not have anyone teaching that one race is superior to another and be paid by taxpayers for that.”

Another new state law approved by Florida’s GOP-led Legislature in 2021 requires all state universities and colleges to survey students, faculty and staff annually about the “intellectual freedom” in schools. The voluntary questionnaire is believed to be the largest-scale campus survey in the nation.

The law was approved by Florida Republican leaders who were worried that schools are biased against conservatives. It has already drawn a legal challenge.

One recent report also shows that the DeSantis administration had even bigger plans for higher education this year, ideas that were left on the cutting room floor and could emerge in 2023.

Florida in 2022 did, however, pass legislation allowing the state to adopt rules requiring tenured faculty to take part in a “comprehensive” review every five years.

Faculty at the University of Florida broached the issue with Sasse on Monday when the senator visited the campus, asking how he would protect tenure while noting that he ended it during his stint as president of Midland University, a Lutheran school in Nebraska.

Sasse said he would be a “zealous defender of tenure” at the university, outlining that it is necessary for a major research school like the University of Florida that differs from Midland, which has a fraction of the Florida institution’s more than 55,000 students.

But qualms about potential tenure tweaks remain a top issue among faculty throughout Florida as they await forthcoming rules from university system leaders.

A draft of proposed system tenure rules indicated that reviews must consider any “biased teaching” or “indoctrination constituting discrimination under Florida law” by the professors, along with history of professional conduct and unapproved absences. It’s unclear, though, if these policies will be included in the final cut of the tenure rule. The Board of Governors canceled its September and October meetings and convenes next on Nov. 9.

Gothard said lawmakers in Florida are relying on a “cartoonish” representation of what is happening in higher education to make policy moves.

He pointed to the extremely low response rate to the political diversity survey offered to students and faculty throughout the system as evidence that the issues brought up at the statehouse aren’t as prevalent on campuses.

“Florida’s students deserve the best education possible, and they deserve better than to be tinkered with, interfered with and harmed by the actions of politicians,” he added.

Gary Fineout contributed to this report.