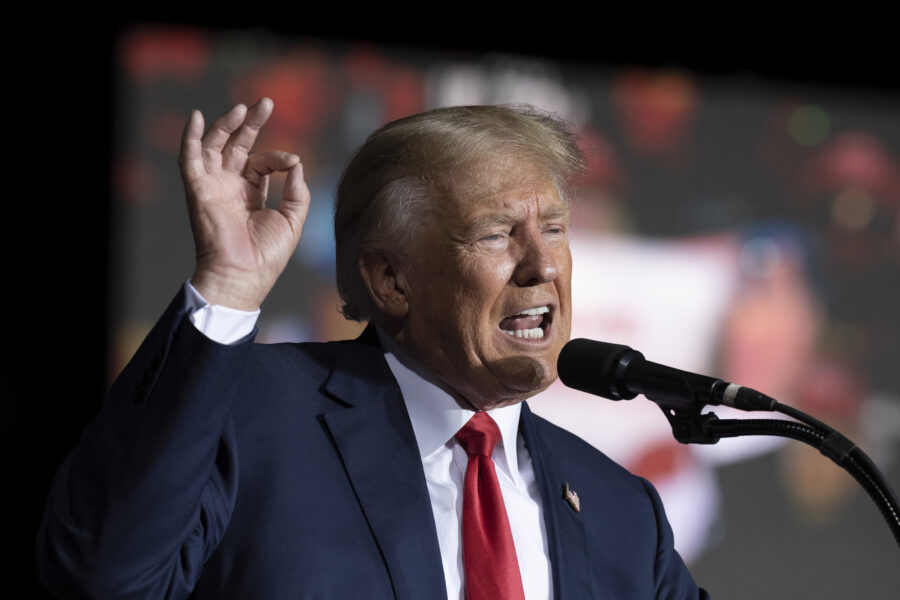 Two years ago, Donald Trump lost the presidency and — it seemed safe to assume — was at last about to lose his hold on national attention.

Soon enough, one supposed, those four bizarre years would come to seem like a hallucination — blurry and unreal. The whole Trump experience would live in national memory as a collective trip to Las Vegas, exhilarating and shameful in equal measure. Now, mouth dry and head throbbing, it was time to fly back home to work, family, sobriety.

For all this bombast, Trump seemed destined to share the fate of most one-term presidents, leaving a faint imprint on history.

This week, as the Jan. 6 special committee holds its hearing before the midterm elections, is a good moment to take stock of Trump’s astonishing achievement since November 2020. In historical terms, Trump is a larger figure than ever.

The usual journalistic crutch when assessing political legacies is “for better or worse,” but in this case it is only for worse. Trump’s historic significance flows from how effectively he has made people doubt what was previously beyond doubt — that American democracy is on the level — and how brilliantly he has illuminated just how much this generation of Americans looks at one another with mutual contempt and mutual incomprehension.

Here is the great paradox of the Jan. 6 panel. Its inquiry has systematically dismantled Trump’s deceptions and denialism surrounding the 2020 election. At the same time, it has helped build Trump into something much larger than he appeared two years ago. He is a political leader too serious to forget.

Based on the old saying that you are winning if they are talking about you no matter what they say is good or bad — can anyone doubt that Trump believes this? — it is clear that Trump’s ex-presidency has been a success. Not many people today talk about Warren G. Harding or Calvin Coolidge. But people will be talking about Donald Trump 100 years from now, and debating how a country found itself so frayed and self-doubting.

How many American presidents in 240 years have helped push the country to a place where its very governability was called into question? Of those very few, Trump is the only one to have done it through cult of personality and manufactured issues.

There have been a few ex-presidents who chose to remain on the leadership stage rather than assume senior statesman status. John Quincy Adams went to the U.S. House as a leader in the anti-slavery movement. William Howard Taft spent nine years as chief justice of the United States. But what other ex-president was regarded as “a clear and present danger to our electoral system and to democratic institutions … a continuing threat,” as Democratic panel member Jamie Raskin put it?

The paradox of the Jan. 6 committee — simultaneously deflating and inflating Trump — is one more expression of the defining phenomenon of the Trump Years: the contempt paradox.

This paradox is the root of his appeal. He thrills his supporters because he says and does things that outrage establishment sensibilities. Contempt is the natural response to these outrages. But that contempt in turn generates even more contempt — the lifeblood of the Trump movement — from his supporters.

One suspects even Trump is surprised by just how much energy could be produced by the contempt cycle, and how long it would last. For seven years, since Trump first vaulted into serious presidential contention in 2015, there has been a tension in how his opponents view him: buffoon or tyrant?

Is he an adolescent at large who craves publicity and applause more than genuine power, and spends hours a day watching cable TV and spouting words that he doesn’t actually believe? Or is he someone who brings conscious method to his demagoguery, and is willing to shred any political or constitutional constraint that gets in his way?

The two interpretations, in fact, were never mutually exclusive, even as they pointed the mind in different directions. What the Jan. 6 panel accomplished was to assemble a vast array of evidence for the second interpretation. It made irrefutably clear how purposeful his effort was to sow doubt about the election, to try to enlist the Justice Department and other arms of the government to pursue his fraudulent claims of fraud, and illuminated how he encouraged mayhem on Jan. 6 and initially shrugged his shoulders at the outbreak of violence at the Capitol. This is not the work of a buffoon.

It is the work of a leader who can, without an election mandate or any formal constitutional power, set a national agenda and count as the second most powerful person in the country, coming in just behind the leader who defeated him and now holds the White House.

A new history of Donald Trump by journalists Peter Baker and Susan B. Glasser (a POLITICO alumna) is titled, The Divider. They don’t intend that title as a compliment. But it is worth remembering that it is a description that applies to most consequential presidents.

“Great presidents are unifiers mostly in retrospect,” the great liberal historian Arthur Schlesinger Jr. told me in 1997, as Bill Clinton was preparing for a second term by promising to bridge partisan divides and unify the country. “The greatest presidents have started by dividing the country on important questions, as a way of uniting the country at a new level of understanding.”

Trump has accomplished one-half of this task. He has divided the country over an important question: Are we a country ruled by law and constitutional procedure, or a tribal country in which what matters is which side you are on? Great presidents are ones that are on the winning side of historical debates, and the future will be a dark place if Trump is ever remembered as a great American president. But the Jan. 6 committee has assured that he still matters now, and will be argued about for a long time to come.