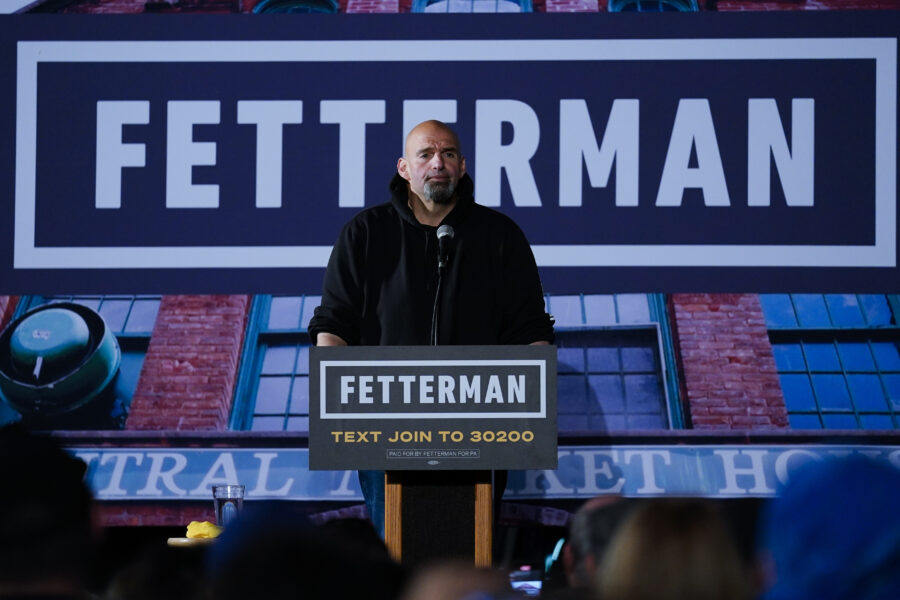 Last weekend, Pennsylvania Democratic Senate nominee John Fetterman’s campaign issued a warning to donors about a purported scam. And for once, it wasn’t Fetterman’s Republican opponent Mehmet Oz, at whom they were leveling the charge.

On Twitter and over email, Fetterman’s campaign manager, Brendan McPhillips, laid into what he called a “scam PAC” that was “using John’s name and likeness for their own fundraising.”

“These people are only pretending that the money they raise goes to John and our campaign. In reality, they are tricking thousands of donors out of hundreds of thousands of dollars,” McPhillips continued. “Not only is this wrong, it also puts us at a major disadvantage.”

The object of McPhillips’ ire was an ad backing his candidate launched earlier that week by the Democratic Coalition, a progressive super PAC.

Super PACs are barred by campaign finance laws from contributing directly to candidates like Fetterman or coordinating with their campaigns. Rare, however, is the occasion when a campaign would use its platform to call one out for soliciting donations. But the Democratic Coalition has ruffled feathers in Democratic circles before.

McPhillips’ missive on Twitter was cheered by several progressive operatives who have previously accused the group of soliciting money from impassioned liberals only to spend it on its own operations. To which McPhillips replied: “Fuck around and find out, grifters.”

But it’s a charge the group rejects, saying the super PAC has been transparent with donors, and is only looking to help elect Democrats.

Rebranded as the Democratic Coalition, it is run by progressive consultant and fundraiser Scott Dworkin. The group bills itself as “one of the largest grassroots Resistance operations in the country.” One landing page for the group on the Democratic fundraising platform ActBlue says the super PAC plans to “produce ads to support Dems in competitive races, level hard-hitting opposition research against Republicans across the country, and lead an unmatched online organizing operation.”

The more recent content included a video portraying Fetterman as a champion of the working class who would act as a bulwark against encroachments on democracy, women’s rights and health care.

Dworkin said the near-constant stream of content pushed out by the group, as well as its Fetterman video, are “part of our mission to reach as many voters as possible through organic social media every day of the year.”

The group has collected $350,000 this cycle, FEC filings show — the vast majority of which has come from small-dollar donors giving less than $200. The committee has reported no independent expenditures either supporting or opposing federal candidates this cycle, compared with the $73,000 it dropped in the lead-up to the 2020 election and Georgia Senate runoffs.

The roughly $20,000 the super PAC spent on Facebook ads through August amounts to just 6 percent of its total disbursements. The group has dropped another $900 on the platform in the past 30 days, according to Facebook’s ad library, but those ads only began to mention specific candidates and target users in Pennsylvania and Ohio beginning in this month.

By contrast, more than half of the super PAC’s $330,000 in disbursements has flowed to the committee’s employees or firms run by them, filings show.

Nearly a fifth of the Democratic Coalition’s spending this cycle, $65,000, has gone to Bulldog Finance Group, a fundraising firm founded by Dworkin. That’s lower than the amount the group sent to the firm in past cycles. But according to campaign finance filings, the Democratic Coalition has been the firm’s only client since 2017.

The committee’s treasurer, Sonya McGrady, is its next highest beneficiary of its expenditures, taking in $50,000 this cycle through the end of August. The Democratic Coalition has also paid $41,000 and $37,000, respectively, to senior adviser Sam Jones for fundraising services and to the digital consulting firm of another senior adviser, Chuck Westover.

“Our group’s modest fundraising has done nothing but help Democratic campaigns and causes,” Dworkin said. “Our group’s messaging has driven billions of impressions over the years and we have built a massive megaphone to help amplify our allies, which we will continue to utilize for years to come.”

Dworkin argued that the nature of the Democratic Coalition’s work doesn’t translate well into FEC’s reporting requirements. “Because we are active on social networks on a daily basis, it requires relentless activity from our team, and so most of our expenses are labor related,” he said.

Moreover, he added, “generating organic activity for candidates doesn’t meet the reporting requirement of buying a paid advertisement because it is based on earned social media reach.”

In the case of the Fetterman video, Dworkin said the objective was “to fire up base voters in Pennsylvania,” and that the video’s accompanying hashtag, #VoteFetterman, “peaked at #8 nationally” on Twitter. It cost the Democratic Coalition $2,000 to produce the ad, he argued. He compared that to a campaign that would have likely paid six figures to have a “Twitter takeover.”

Dworkin said the super PAC raised only $280 off the video, which asked viewers to “donate today and help us show this awesome Fetterman ad to swing voters in Pennsylvania.” He defended the solicitation by noting the group also fired off a tweet to its over half-million followers containing a link to donate directly to Fetterman’s campaign. That tweet came before McPhillips went after the group

Though Fetterman’s campaign cast the group as a scam PAC, there are no legal requirements that spell out what percentage of a PAC’s spending must be put toward politicking — or paying their employees.

That ambiguity has allowed political action committees to engage in conduct ranging from apparent self-dealing to actual fraud, which the federal government has only recently begun to mobilize in earnest to combat.

Such activity has flourished on both the left and right, growing serious enough to trigger a warning from the FBI in 2021 urging would-be donors to be on the lookout for such schemes, calling disbursements to vendors associated with a PAC’s operators “a red flag.”

Still, “for First Amendment reasons and others, PACs have a fair amount of flexibility in how they spend their money,” said Erin Chlopak, senior director for campaign finance at the watchdog group Campaign Legal Center, who pointed out that “frankly, it does cost money … to run ads and support candidates and so fundraising is a legitimate part of PAC activity.”

That makes it hard to police the issue, and means that it’s mainly up to donors to determine where they want to send their money. Last year, the FEC heard recommendations from a working group on how best to address the issue. Most of the proposals centered around ensuring donors are better informed about the political activities of the committee they’re interested in donating to. The campaign finance watchdog has yet to vote on any of the proposals.

In the absence of regulation, politicians have sometimes taken it upon themselves to try and block other groups from trying to profit off their name and likeness — even when the group in question is an ally. Just last year, the Republican National Committee rebuffed a cease-and-desist demand from former President Donald Trump to stop its “unauthorized use of President Donald J. Trump’s name, image, and/or likeness in all fundraising, persuasion, and/or issue speech.”

A senior Fetterman aide declined to comment on the record as to whether the campaign has any intention to issue such a request to the Democratic Coalition but said that “we’ve been clear on telling this group to go fuck themselves.”