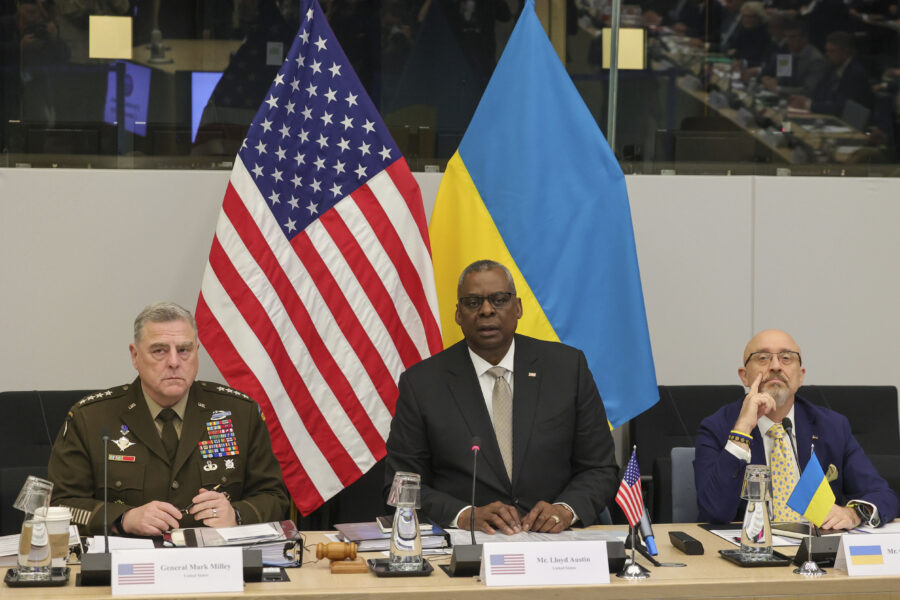 BRUSSELS — NATO is developing a 10-year plan to rebuild the Ukrainian defense industry, with the first meeting between the alliance and Kyiv slated for next week.

The meeting will be the start of a long process hinted at for weeks by U.S. and NATO officials of a long-term commitment to Ukraine to bring it closer to the alliance in both training and equipment.

“We will be looking at defense planning requirements to get Ukraine fully interoperable with NATO,” said a senior NATO official who asked not to be named due to ground rules for speaking to reporters during alliance meetings in Brussels this week. “It’s about shifting away from Soviet equipment … to NATO-compatible Western equipment.”

The top acquisition officials from the alliance already met this month to start planning ways to help the Ukrainian defense industry while simultaneously replenishing their own stocks of weapons and equipment that have been donated to Kyiv since the start of the war. This new NATO-led effort will focus only on Ukraine, however.

“We’ll be looking at ways to try and rebuild Ukraine’s defense industry,” the official said.

The wider effort of looking beyond the day-to-day battlefield needs of the Ukrainian military will require years of attention from partners stretching from Warsaw to Ottawa, an effort that could eventually transform Ukraine into a NATO country by default, even if it is not a member of the alliance.

Those allies met in Brussels on Wednesday in the sixth meeting of the Ukraine Defense Contact Group, a collection of 50 nations committed to arming and supplying Ukrainian forces. The Russian missile strikes on civilian targets over the past several days that have killed dozens of civilians have led to a rethinking of that aid, pushing air defense to the top of the Ukrainian wish list.

The volleys of guided and unguided Russian missiles that hit playgrounds, intersections, power facilities and apartment buildings in Ukraine have threatened to push the war in a new direction, where the Kremlin’s increasingly humiliating battlefield losses give way to the terrorizing of the civilian population.

Leaders have repeatedly broached the issue of whether to declare Russia a sponsor of terrorism, as Ukrainian troops continue to uncover mass graves in newly liberated areas and missiles continue to kill civilians.

Estonian Defense Minister Hanno Pevkur told POLITICO on the sideline of the meetings that his parliament would vote on the issue in the coming days. “I don’t see any obstacles” to making the declaration, he said, “because when we just take the facts, then by international law how do you describe the terrorist actions that are ongoing at the moment in Ukraine.”

In his remarks, Milley didn’t accuse Russia of terrorism but said that “indiscriminate and deliberate attacks on civilian targets is a war crime.” President Joe Biden has also long called for international bodies to investigate alleged Russian war crimes in Ukraine.

While NATO lays plans to bolster Kyiv’s ability to arm itself against Russia, the months of missile attacks across Ukraine have emptied out Moscow’s supply of modern weapons. “They’ve certainly depleted a good portion” of their precision-guided munitions since the start of the war, a second senior NATO official told reporters.

Around half of the missiles Russia fired at civilian targets in recent days were intercepted by Ukrainian air defenses, which mostly consist of older, Soviet-era equipment, calling into question Russia’s ability to hit targets. “All signs are that Russia has targeted civilians throughout the war … it likely will continue” the official said.

The new U.S. National Security Strategy released Wednesday held that due to the fighting in Ukraine, “Russia’s conventional military will have been weakened, which will likely increase Moscow’s reliance on nuclear weapons in its military planning.”

Russian leaders, including President Vladimir Putin, have broached the subject of using nuclear weapons since the start of the war, but shocking Russian battlefield losses in recent weeks have raised the specter of using lower-yield nukes to stop advancing Ukrainian forces. A Russian nuclear strike would lead to “unprecedented consequences” for Moscow, the second NATO official said, and would “almost certainly be drawing a physical response from many allies, and potentially from NATO itself.”

In remarks kicking off the contact group’s meeting Wednesday morning, Defense Secretary Lloyd Austin said “our support for Ukraine’s right to defend itself doesn’t hinge on the outcome of any particular battle. Our resolve to support Ukraine’s defenders extends through all seasons.”

The coming winter months could be a test of Western resolve in Ukraine, as the fighting will likely bog down in the mud and cold weather across Ukraine. But Austin pledged not to lose focus, adding “we are increasingly posturing ourselves to support Ukraine’s defense needs for the challenging months and years ahead.”