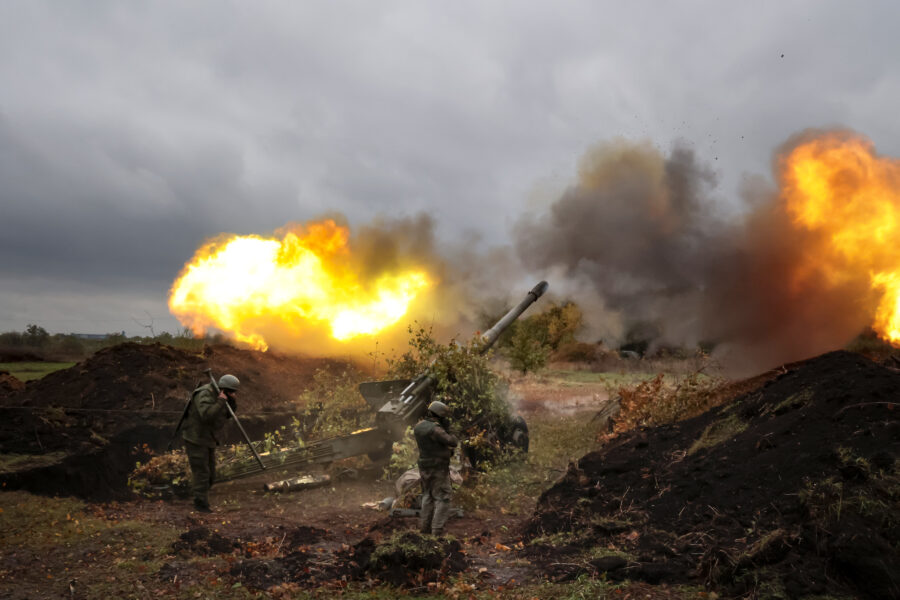 The U.S. is wading deeper into Russia’s war on Ukraine on multiple fronts, even as the president and the Senate Armed Services Committee chair liken the conflict to the height of the Cold War.

Days after Ukraine is alleged to have bombed the sole bridge linking Crimea to Russia and Moscow responded with missile attacks on more than 20 Ukrainian cities, a senior U.S. official confirmed Tuesday that sending advanced air defenses to Kyiv is now the top priority of Ukraine’s Western backers. The announcement followed President Joe Biden’s pledge to offer such assistance in a call with Ukrainian President Volodymr Zelenskyy.

At the United Nations this week, American diplomats are lobbying countries to support a resolution rebuking Russia for its claim to have annexed four Ukrainian territories. A vote is expected Wednesday.

U.S. lawmakers, meanwhile, are invoking Ukraine as they moved to punish Saudi Arabia for an OPEC oil production cut that could help Russia and deepen an energy crisis that is already testing the resolve of the Western alliance. There’s also bipartisan agreement on Capitol Hill in favor of boosting Ukraine’s ability to defend itself from missile strikes and drone attacks as anger flares toward Russian leader Vladimir Putin over his threats of nuclear retaliation.

Taken together, the developments underscore America’s commitment to cooperation with Kyiv, even as Biden remains keen to avoid a direct U.S.-Russia conflict and the war drags on with no end in sight. The looming winter months promise to further stall momentum and strain supply lines on the battlefield.

“We’re in a situation that we have not seen since the Cuban [missile] crisis,” Senate Armed Services Chair Jack Reed (D-R.I.) told POLITICO in an interview. “The more we can do to secure the airspace of Ukraine and help protect the Ukrainian people — that’s something we have to do.”

Reed’s comments echoed recent ones from Biden, who used the term “Armageddon” when referring to Putin’s ongoing tough talk.

In addition to Reed, powerful Republicans on the Hill are also pushing for the Biden administration to do more to help secure Ukraine from the air and prevent more strikes like those that hit Kyiv earlier this week.

The top Republican on the Senate Foreign Relations Committee, Sen. Jim Risch of Idaho, went even further by calling for the transfer of fighter jets as well. “Better arming and equipping of Ukraine will help save lives and give Ukraine the capacity to end this war faster,” Risch said. “The Biden administration can and must do more to defend Ukraine.”

Russian Foreign Minister Sergey Lavrov suggested Tuesday that it has long been Washington, not Kyiv, calling the shots against Moscow. “It seems to me that the Americans have been participating de facto in this war for a long time,” Lavrov told Russian state television, according to Reuters. “This war is being controlled by the Anglo-Saxons.”

That allegation ignores the fact that, up to this point in the conflict, Western officials had walked a fine line in sending munitions to Ukraine — making sure it had enough to defend itself but stopping short of providing weapons that could be used to escalate the war.

And tensions had flared between the U.S. and Ukraine as to the appropriate response to Russia’s actions: U.S. officials were angered when the Ukrainians detonated a car bomb in Moscow in August that killed the daugther of a promiment Russian analyst. The public release of information about that plot in recent days was meant, in part, as a warning to Ukraine not to repeat a similarly provocative move, according to an official familiar with the matter.

But Putin’s indiscriminate shelling of civilian targets like parks, playgrounds and a popular pedestrian bridge has tightened the U.S.-Ukraine alliance. In his call with Zelenskyy, Biden repeated his vow from this summer’s NATO summit in Madrid that the U.S. would stand with Ukraine “as long as it takes” to thwart Russia’s aggression.

America’s aim there is also to keep NATO allies from succumbing to what U.S. officials believe is Putin’s goal: breaking the will of the Western alliance by terrorizing Ukraine with missiles launched against civilian targets while plunging Europe into a winter that could foment economic hardship and second thoughts about directing resources to Kyiv.

Weapons alone won’t sustain the Ukrainians, however, if Moscow keeps getting lifelines like the one OPEC nations provided by deciding last week to cut their oil output, enraging U.S. and European officials who wanted a production boost to help further starve Russia’s energy revenue.

The decision has prompted top U.S. lawmakers to call for an immediate freeze of security cooperation between the U.S. and Saudi Arabia — including the halting of all weapons sales to the kingdom and removal of all U.S. troops and equipment. Senate leaders are further considering legislation that takes aim at OPEC for price-fixing and antitrust violations.

“If they don’t have any concern for international security and the stability of the world economy, why should we be helping them?” said Sen. Angus King (I-Maine), a member of the Armed Services and Intelligence committees, echoing calls to cut off U.S. cooperation with the kingdom.

The Saudi actions have angered many inside the Biden administration, too, especially after the president visited Riyadh over the summer in a bid to ease tensions. White House spokesperson John Kirby said Tuesday that Biden would work with Congress “right away” to re-evaluate the U.S.-Saudi relationship, although he didn’t offer specifics.

For many Ukraine supporters, that action can’t come soon enough as Western governments worry that energy prices will continue to spike if the global supply remains strained while Russia is cut off.

“The United States, the American people, the people of Western Europe are making sacrifices every single day to support Ukraine,” Rep. Tom Malinowski (D-N.J.) said on CNN Tuesday. “Saudi Arabia just decided to intensify our sacrifices to make our pain harsher in order to help Putin.”

For years, many in Washington have overlooked concerns about anti-democratic actions and human rights abuses in Saudi Arabia in the name of advancing mutual security interests in the region, especially on countering the Islamist regime in Iran. Yet Biden administration officials see a potential shift on the horizon after the kingdom effectively sided with Russia.

“We’ve been trying to pull them onto the right side of history as the international order is threatened by Russia’s invasion of Ukraine, and the Saudi response is thanks, but we need higher oil prices so the crown prince can build his ridiculous city in the desert,” an administration official told POLITICO, speaking on condition of anonymity because of the sensitivity of the matter.

In New York, the U.S. has worked with the U.K. and European Union countries to intensely lobby an array of countries to back the Russia-rebuking resolution being set forth at the General Assembly. Russia vetoed a similar resolution at the U.N. Security Council last month.

While Russia doesn’t have a veto to wield at the General Assembly, many countries — for historical, economic and other reasons — have been unwilling to take sides between the West and Moscow. The goal this time around, for the U.S. and its allies, is to get at least some of those countries — many of which are in Africa or Latin America — to move to a yes vote from an abstention.

A Western official, speaking on condition of anonymity because the person was not authorized to provide on the record comments, said the U.S. camp is “very confident” of winning the motion with more than 100 votes, but they want to get as much support as possible. There are 193 U.N. member states.

Despite the latest U.S. efforts to boost the Ukrainians, Biden’s team insists that the United States still has no intention of putting American troops on the battlefield and directly facing off with a fellow nuclear power.

“We do not seek conflict with Russia. The president has been crystal clear about that,” Kirby said, adding, “No one wants to see this war escalate into the nuclear realm.”

Cristina Gallardo and Lara Seligman contributed to this report.