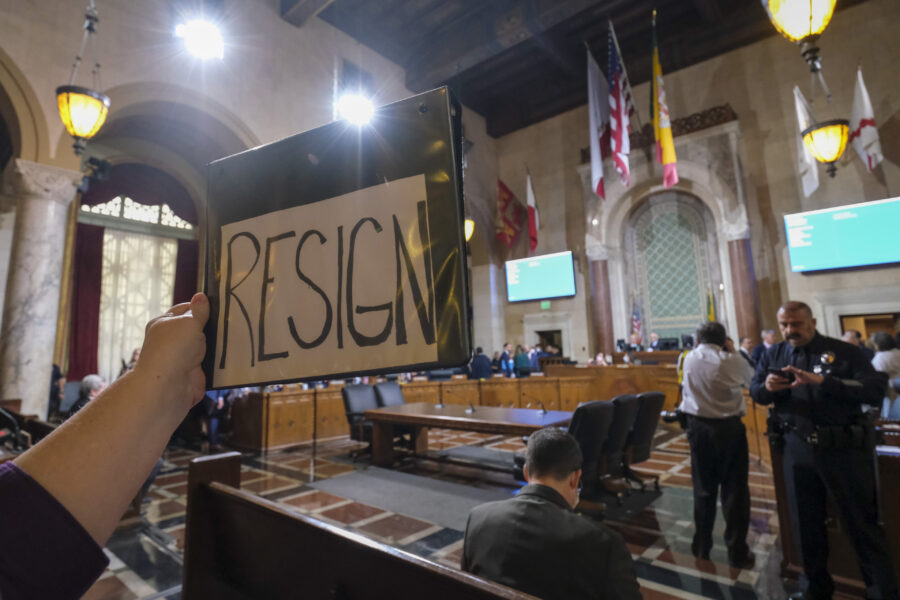 America’s second-largest city was already mired in scandal and chaos. Now, it is reeling from a surreptitiously released recording of City Council members making racist remarks as they schemed to consolidate power — a revelation that prompted Democratic leaders from President Joe Biden on down to call on them to resign.

One former council member was sentenced to prison and two others are facing trial. The head of the Los Angeles Department of Water and Power pleaded guilty to bribery. Mayor Eric Garcetti’s nomination to be the Biden administration’s ambassador to India is on hold because of allegations he failed to adequately handle accusations of sexual misconduct by a top aide.

The crush of scandals has tarnished Los Angeles government and eroded public trust as the city begins balloting in one of the most expensive mayor’s races in its history, prompting angry protesters to pack a council meeting Tuesday and clamor for resignations.

“I don’t think there’s been anything like this in city government since the 30s and 40s, the corruption heyday of Los Angeles,” said former County Supervisor Zev Yaroslavsky, director of the Los Angeles Initiative at UCLA. “I think the city governance system is profoundly broken, and I think this latest revelation just shatters what was already broken.”

The latest crisis exploded Sunday, when the Los Angeles Times detailed a recording of then-City Council President Nury Martinez, City Council members Kevin de Léon and Gil Cedillo, and then-labor leader Ron Herrera using racist language to mock a Black child, denigrating colleagues, and discussing how to use the city’s redistricting process to punish rivals and bolster their authority. So far, Herrera has stepped down and Martinez has taken a leave of absence, infuriating Democrats who believe the members can no longer serve.

The tape landed as the city has endured a grinding drumbeat of accusations that public officials have misused their power, deepening public pessimism about local government.

“It just feels like the city’s falling apart,” former Mayor Antonio Villaraigosa said in an interview after huddling with other civic leaders.

“There’s always been a level of skepticism and even cynicism with respect to government and the like and political leaders,” Villaraigosa added, “but I think with everything going on people are really feeling like City Hall isn’t working on their behalf.”

And Garcetti’s nomination to be ambassador to India has stalled out in the Senate as critics allege Garcetti knew of a former top aide’s alleged sexual misconduct. Garcetti has denied the allegations but the issue has frozen a confirmation process that once looked certain.

“It just looks like a dumpster fire on top of a hurricane,” said Jessica Levinson, a Loyola Law School professor and former president of the Los Angeles Ethics Commission. “We have three of the most powerful Latinos in the city who are part of a conversation that is openly racist, you have one of the most powerful African-American leaders who’s on trial for corruption issues (in Ridley-Thomas), you had Jose Huizar’s problems, you had Mitch Englander’s problems — this is not a one-off situation.”

A cloud of malaise has also shadowed a fierce mayoral contest as residents express profound frustration about homelessness and crime. “I don’t think I’ve seen things so bad,” Villaraigosa said. 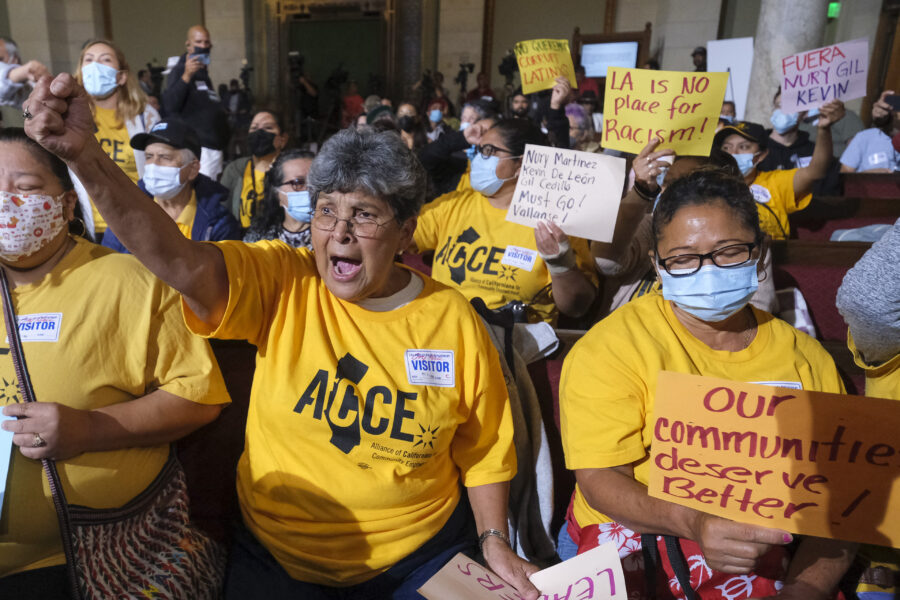 Businessman Rick Caruso has cast his mayoral campaign as an effort to get a directionless city back on track, framing himself as an outsider capable of rooting out corruption, as frustration with homelessness and crime has spiked. On Sunday, Rep. Karen Bass — who is leading Caruso in mayoral polls — spoke to the broader fallout in a statement saying she had huddled with Black and Latino leaders to “ensure this doesn’t divide our city.” Caruso and then Bass have called for the council members to resign.

Los Angeles is not a city known for vigorous civic engagement. While it contains a rich history of activism, it also tends to feature lower voter turnout than California’s other urban hubs. The parade of public chicanery has fed a sense that the government is disconnected from the people it represents.

Angelenos have become accustomed to the lurid details of corruption allegations. The federal government described finding $129,000 in cash in Huizar’s closet. Ridley-Thomas allegedly sought to secure a faculty post and a scholarship for his politically embattled son.

But the latest scandal hit a higher register for many because the tapes are available for anyone to hear. The officials speaking have no space for denial.

“So much of what people believed to be true is on that tape,” Romero said. “Now there’s evidence of it, and it’s done in such a hateful and horrific way.”

Democrats who demanded the council members’ resignations have also urged unity and healing in a fractured city. But that process will take time.

“Until we decide how to grow a pie that is big enough for all of us rather than fighting for the crumbs, this is going to be a cyclical journey of trauma,” said state Sen. Sydney Kamlager, a Los Angeles Democrat. Rebuilding trust, Kamlager said, is “going to be a long process, and there are going to be hurdles and starts and stops.”

“It’s like any relationship,” Kamlager said. “If you cheat on someone and ask for forgiveness, then they’re sleeping with one eye open.”