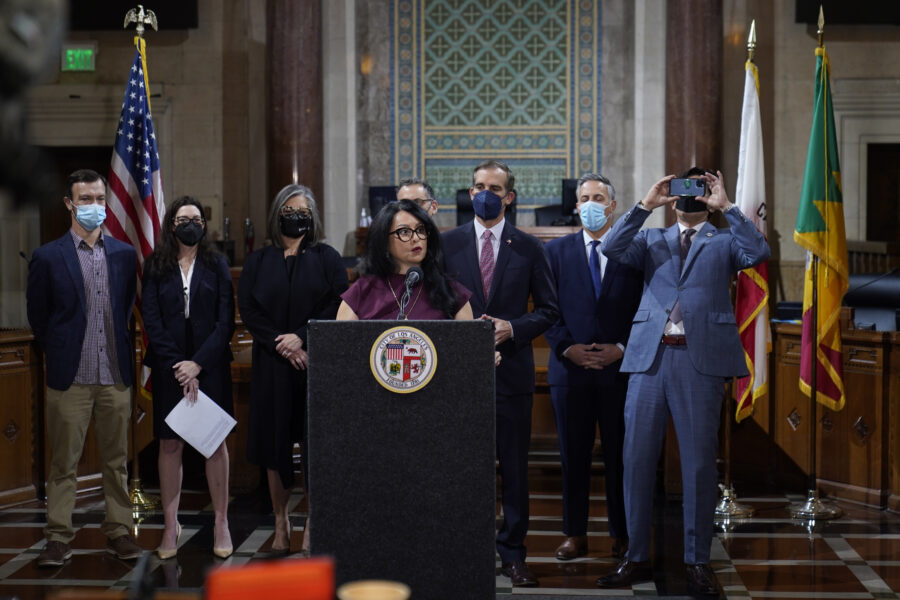 President Joe Biden joined many Democratic leaders and outraged citizens in calling Tuesday for the resignation of three Los Angeles City Council members who have clung to their posts despite being caught on tape making racist remarks.

Angered residents turned out in force since the first council meeting since the remarks became widely known, shouting that proceedings shouldn’t even be held until Nury Martinez, who stepped down as council president but hasn’t resigned her seat, quits along with the two colleagues who took part in a recorded conversation that has set off a firestorm.

Martinez did not attend the session but the two colleagues, council members Kevin de Léon and Gil Cedillo, both attended.

“Asking for forgiveness is a good first step,” council member Mike Bonin, whose Black son was called a racist slur by Martinez, said in one of the few hushed moments of an otherwise raucous public meeting. “Well, it’s a second step because first you must resign and then ask for forgiveness.”

Biden was clear about what should happen to the council members mired in a scandal that comes amid a hard-fought campaign for mayor, featuring billionaire Rick Caruso against Rep. Karen Bass, and a series of corruption cases that have tarnished municipal government in LA.

“He believes that they all should resign,” White House press secretary Karine Jean-Pierre told reporters at a briefing. “They should all step down.”

The president’s condemnation is the latest and loudest call from a broad swath of public officials demanding the members, all Democrats, relinquish their seats in light of the shocking comments captured on tape. The city has been rocked by details of a recording, first published Sunday.

Martinez, de Léon and Cedillo, and then-labor leader Ron Herrera used racist language to mock Bonin’s son and to disparage others as they discussed how to influence the city’s redistricting process to their benefit.

Jean-Pierre framed Biden’s call for resignation as the difference between Democrats and “MAGA Republicans.”

Elected officials have reacted with revulsion and calls for the council members to resign. The fallout led Herrera to resign Monday from his position leading the powerful Los Angeles County Federation of Labor. Martinez stepped down from presidency of the city council on Monday and followed up on Tuesday by saying she would “take some time to have an honest and heartfelt conversation with my family, my constituents, and community leaders.”

That step was unlikely to mollify the many elected officials who have called for Martinez to leave office.

“At a time when our nation is grappling with a rise in hate speech and hate crimes, these racist comments have deepened the pain that our communities have endured,” said U.S. Sen. Alex Padilla — a native of the city who is a longtime ally of Martinez. “Los Angeles deserves better.”

The recorded conversation rocked Los Angeles and conjured a painful history of racism that coexists with the city’s celebrated diversity. Bass, who followed fellow mayoral candidate Caruso in calling for the members’ resignations, said in a statement she had spent Sunday “speaking with Black and Latino leaders about how to ensure this doesn’t divide our city.”

Their refusal so far to step down raised the prospect of a deeply divided city council in which two serving members would be profoundly alienated from their colleagues. Cedillo is on his way out after losing a primary, but Martinez and de Léon are not up for re-election until 2024.

In the recordings — which were posted anonymously to Reddit but whose authenticity has not been disputed — the council members refer to another council member’s Black son as a “little monkey” in Spanish and liken him to an “accessory” who deserves a “beatdown.”

The conversation also veers into the raw power politics of redistricting and competition between ethnic groups. They talk about distributing “assets” to “Latino districts,” undermining a colleague by putting her district “in a blender” and using new lines to “create districts that benefit you all.” The four Latinos deride Los Angeles District Attorney George Gascón as “for the Blacks,” argue white council members ignore Latinos, and warn African-American council members could “come after us” in an act of political reprisal.

Christopher Cadelago contributed to this report.