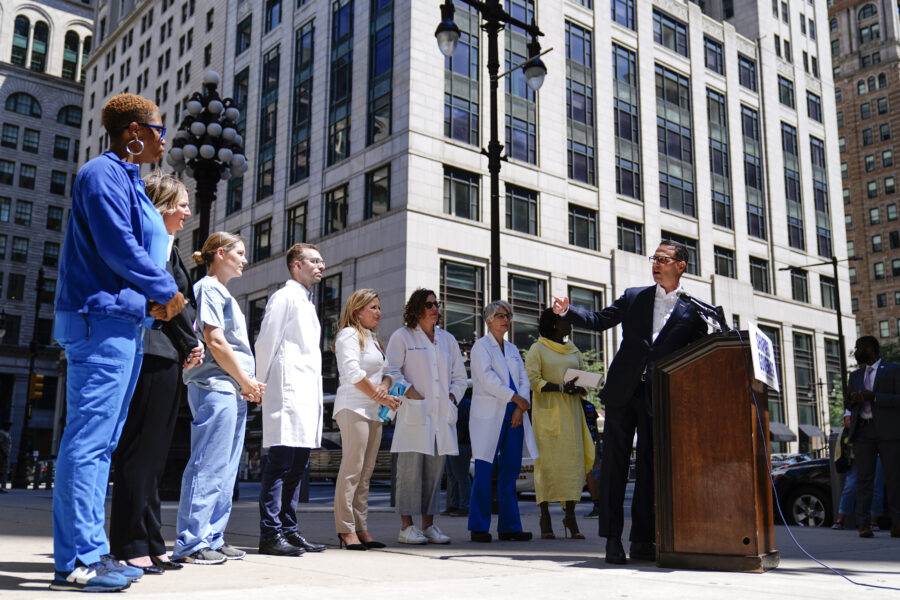 PHILADELPHIA — Physicians across Pennsylvania are politicking in unprecedented ways with less than a month to go before the midterm election, making the case that the abortion restrictions proposed by Republicans would threaten one of the state’s most important economic sectors.

They’re flanking Democrats at campaign rallies and knocking on doors in flippable state legislative districts. They are registering patients and colleagues to vote. At town halls and in ads, they warn that doctors, residents and medical students will avoid a state where they could be prosecuted for helping a patient terminate a pregnancy — damaging one of the largest and most recession-proof pieces of the economy.

Typically cautious establishment groups, such as the Pennsylvania Medical Society, are also sounding the alarm about “the potential criminalization of physicians” and urging lawmakers considering new abortion restrictions to “stay out of the exam room,” while doctors and doctors-in-training are forming newer advocacy groups like Medical Students for Choice, Physicians for Democratic Principles, Physicians for Shapiro and Fetterman, the Committee to Protect Health Care and Vot-ER.

“This is the first time I’ve really seen the doctor community really activate like this,” said Lisa Goldstein, a pediatric psychiatrist who has run a shoestring get-out-the-vote operation out of her garage in the Philadelphia suburbs for the past few years. “Doctors are usually very careful in their public life, but there’s none of that feeling right now. We’re out there saying what we believe.”

It’s a major shift for Pennsylvania’s medical community — the fourth-largest job sector in the state, employing more than 400,000 people — as doctors and medical organizations are usually hesitant to wade into politics, careful to maintain good relations with both the Democratic governor and Republican legislature.

“It is unusual,” acknowledged David Talenti, the president of the Pennsylvania Medical Society and a gastroenterologist who practices in Wayne County. “But the reason we weighed in is that we see this as a significant threat to our medical practice.”

Democrats running for state and federal office in Pennsylvania have capitalized on the doctors’ message, confident it can both activate their progressive base and win over the independents and Republicans — particularly suburban women — whose votes are critical to winning statewide. The focus on how abortion restrictions impact the medical community comes as Democrats make closing arguments in the races for governor and senator — two contests where polls show them ahead — and state legislature, where Democrats are targeting about a dozen Republicans in an attempt to seize control of the statehouse for the first time in nearly 30 years.

Amid this barrage, Republicans say physicians’ fears about the impact on the state’s medical sector are overblown, and they’re confident voters care more about other issues.

“I have lots of town halls, and it’s not something that folks talk about regularly,” said Republican House Rep. Torren Ecker, who represents a county where former President Donald Trump won two-thirds of the vote in 2020. “For the general public, when you’re knocking on doors, it’s pocketbook issues, it’s inflation, it’s education. It’s things like that that people care about right now.”

Ecker, who told POLITICO he is pro-life, added that while doctors’ voices are important to the abortion debate, he doesn’t see them changing the outcome.

“I think that medical professionals should certainly have a seat at the table. I’m not going to ignore what they’re saying,” he said. “But other groups are important, too, for putting the whole picture together.”

Abortion is legal in the state up to 24 weeks of pregnancy. But Republicans in the coming session are expected to pass legislation to put a measure before voters in 2023 that would amend the state constitution to establish that there is no protection for abortion rights — clearing the way for new laws that would criminalize the procedure.

Doug Mastriano, the Republican candidate for governor, has voiced support for a total ban on abortion beginning at conception with no exemptions for rape, incest or the life of the mother. Senate GOP candidate Mehmet Oz has distanced himself from that stance, saying he doesn’t support a national abortion ban and calling for exemptions in those cases. He told supporters at a tele-town hall earlier this year, however, that he considers abortion murder at any stage of pregnancy.

The Mastriano campaign did not respond to requests for comment. Asked about the doctors’ statements, Oz’s communications director Brittany Yanick dismissed them as partisan and few in number, adding: “What a joke.”

Pennsylvania doctors say GOP wins and the criminalization of abortion that could follow would mean medical students at the state’s top-flight schools receive incomplete and inferior training in areas, such as miscarriage management, emergency obstetrics and terminating ectopic pregnancies, which would threaten the state’s reputation as a top destination for medical care.

Echoing arguments made by doctors, nurses and other health care professionals in Indiana, Michigan, Nebraska, West Virginia and other states weighing new restrictions on the procedure, the Pennsylvania doctors also say the fear of prosecution and inability to use their best medical judgment will deter providers of all kinds from practicing in Pennsylvania, which could hamper abortion access and diminish health care quality in a state that has one of the lowest maternal mortality rates in the nation.

Democrats are counting on doctors as trusted voices to help sell their message. At a press conference at the Ala Stanford Women’s Health Center on the north side of Philadelphia on Tuesday, Attorney General and Democratic gubernatorial candidate Josh Shapiro turned the mic over to Valerie Arkoosh — an anesthesiologist, obstetrician and Montgomery County elected Democrat who has treated pregnant patients at teaching hospitals in the area for more than 20 years.

On Thursday, at Lt. Governor and Democratic Senate hopeful John Fetterman’s campaign office across the street from Philadelphia’s City Hall, a group of doctors dressed in white coats excoriated Oz for his stance on abortion and for the products he promoted on his long-running television show and said his win would threaten medical care in the Keystone State.

“If I were a young medical student deciding where to start a family, there is no way I would choose to live in a state with an abortion ban if I had another choice,” one of the doctors, Belinda Birnbaum, told POLITICO. “This would make our existing workforce shortages in primary care, rheumatology and other areas much worse.”

Birnbaum, a rheumatologist who has spent recent weekends canvassing in Philadelphia’s battleground suburbs, is one of more than 300 doctors who formed Physicians for Fetterman and Shapiro earlier this year. Unlike Birnbaum, who became politically active during the Trump administration, it’s the first foray into politics for the overwhelming majority of the group’s members, according to its leaders.

As they deploy across the state in the final weeks before the election to knock on doors, host town halls, and testify at county and township meetings, they’re drawing from their experiences to try and sway voters who may see abortion as a culture war or religious battle.

“I think a lot of people who say they are pro-life or anti-abortion aren’t considering that the kind of broad sweeping legislation Republicans are pursuing could potentially affect their own family member who has a hemorrhage or an early miscarriage or an ectopic pregnancy,” said Jessica Klemens, an OBGYN who practices in Montgomery County and who hadn’t engaged in political advocacy before this year. “I’ve had a second-trimester patient whose water broke and who presented with a fever, and things can get complicated very fast. In states with bans, doctors have to wait and question how sick a person has to be before they can get an abortion.”

Doctors and medical students are also lobbying their employers — the state’s biggest schools and health systems — to use their political weight to advocate for abortion rights, but they said that has been “a tougher hill to climb” and most declined to take a stand.

“There are a variety of reasons, including institutional inertia and fear of political retribution,” said Benjamin Abella, an emergency physician at Penn Medicine in Philadelphia and a leader of Doctors for Shapiro and Fetterman. “It’s understandable that they would be extra cautious, but we’re saddened by that because we feel this issue crosses a bright line. Once you open this door, what else will they try to legislate? These groups should not reassure themselves that it will stop with abortion.”

The University of Pittsburgh Medical Center — the state’s largest nongovernmental employer — has been a top target. More than 1,800 students, doctors, professors and other employees signed an open letter in July that called on the medical behemoth to take a stronger stand against GOP proposals to restrict abortion, citing hospital groups in Ohio and other states that have done so and arguing the institution is “in danger of complicity” if it doesn’t speak out.

Greer Donley, a law professor at the University of Pittsburgh and letter signator, said the lack of response has been “incredibly disappointing,” though she acknowledges that GOP lawmakers’ recent threats to the institution’s funding over its use of fetal tissue in medical research were likely a factor.

UPMC, which has more than 90,000 employees and brings in billions in revenue each year, did not respond to a request for comment.

Yet other medical organizations in the state have spoken up.

The Philadelphia College of Physicians, a group dating to 1787, declined to speak with POLITICO but issued a statement when the Supreme Court overturned Roe v. Wade telling lawmakers to drop efforts to restrict abortion, warning bans would result in “dangerous alternatives and devastating outcomes.”

Doctors, and the Democrats they support, believe their message is resonating.

A USA TODAY/Suffolk University poll of likely voters released last week found Fetterman with a 6-point lead over Oz — though the race has narrowed by a few points since June. Shapiro has a wider margin in his race for governor, leading Mastriano by 11 points. That poll also found that abortion rights was a top concern for voters, second to the economy.

Another poll by Monmouth University released last week showed that voters trust Fetterman more than Oz on abortion rights by a wider margin than any other issue — 48 to 29 percent — and Fetterman also leads on jobs and the economy 45 to 36 percent.

Fetterman and Shapiro are quick to argue the topics are inextricably linked and say doctors have the credibility and gravitas to drive the point home.

“Historically, physicians have not been so active in political endeavors,” Abella said. “But this election is different, because in this election, our patients are at risk. And many of us are now coming off the sidelines.”