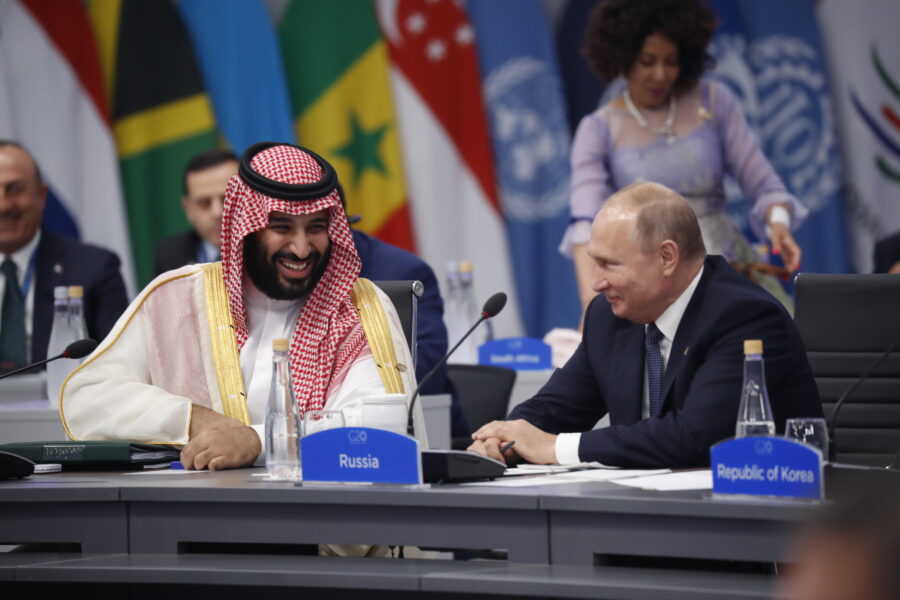 This week, Saudi Arabia colluded with Russia — deciding to cut 2 million barrels a day of oil production at the OPEC+ meeting, thus raising the price of gas to Russia’s advantage. The shocking move will worsen global inflation, undermine successful efforts in the U.S. to bring down the price of gas, and help fuel Putin’s unprovoked invasion of Ukraine.

The Saudi decision was a pointed blow to the U.S., but the U.S. also has a way to respond: It can promptly pause the massive transfer of American warfare technology into the eager hands of the Saudis. Simply put, America shouldn’t be providing such unlimited control of strategic defense systems to an apparent ally of our greatest enemy — nuclear bomb extortionist Vladmir Putin.

That is why we are proposing bicameral legislation in the Senate and House on Tuesday that will immediately halt all U.S. arms sales to Saudi Arabia. For several years now, our colleagues have been considering similar proposals, but those measures haven’t passed. Due to intense bipartisan blowback to Saudi’s collusion with Russia, we think this time is different. Based on our conversation with colleagues, our legislation is already garnering bipartisan support in both chambers.

What would lead the Saudis so unwisely to err with their recent OPEC+ mistake? Stunned energy commentators have suggested that the Saudis were merely concerned about their endangered financial returns, acting rationally. Denying any political motives, Ali Shihabi, a Saudi analyst, insisted in the New York Times that the move was merely “to keep the price in an acceptable band.”

But this claim is unjustified. OPEC has never cut production in such a record tight market and these production cuts will lead to unsustainably low oil inventories, sending the price of oil skyrocketing out of any “acceptable band.” Furthermore, the G-7 oil price caps plan is not targeted at OPEC; it is strictly limited to Russian oil.

Nor can this Saudi move be justified by the non-existent global recession its leaders cite. Presently markets are very tight, with lush 73 percent profit margins for Saudi Arabia. In other words, there was no immediate need for Saudi Arabia to reduce supply unless they were seeking to harm the U.S. to the benefit of Russia.

Every OPEC member has been making massive profits recently — except Russia because it is OPEC’s least efficient producer. It costs Russia $46/barrel to extract oil but, with U.S. technology, the Saudi’s cost is only $22/barrel. Plus, only Russia has had to offer huge $35/barrel discounts to customers like India and China since few others want sanctioned Russian oil.

To be clear, Saudi Arabia remains important to energy security and stability in the Middle East, to global economic prosperity, and as a regional ally against Iran, but it made a terrible mistake this week. The country’s support for Russia should spark a far-reaching review of the U.S.-Saudi relationship — even as the regime tries to “sportswash” its international image in the wake of Washington Post columnist Jamal Khashoggi’s brutal murder and the humanitarian disaster caused by Saudi’s war in Yemen.

Members of Congress are already talking about how best to respond. Some propose extending domestic antitrust laws to international commerce. Others propose reviving a GOP initiative to withdraw U.S. troops from Saudi Arabia. But that idea has failed previously given that the U.S. would rather have its own troops there than Russian or Chinese troops.

A simpler, far more urgent move to fortify U.S. national security would be to pause all U.S. military supplies, sales and other weapons aid to Saudi Arabia. This includes the controversial, new and hastily planned Red Sands testing facilities in Saudi Arabia.

U.S. military collaboration with the Saudi regime is more extensive than many realize, but that also gives the U.S. significant economic and security leverage over Riyadh. Today, Saudi Arabia is hugely dependent on U.S. defense assistance, purchasing the vast majority of its arms from the United States. The country cannot substitute defense suppliers unless it wishes to partner with Russia, Iran or China for far inferior systems which have no interoperability with their existing weaponry. (While Saudi does source some military technology from other countries, that’s typically low-grade weaponry and small arms such as legacy grenade launchers, rifles and ammunition.)

Perhaps even more important than Saudi’s reliance on U.S. arms is its reliance on U.S. companies to help build up the local defense industry through big-ticket joint ventures. These sensitive and intensive arrangements — which have received little public attention — were largely initiated in 2017 and have outsourced U.S. sensitive technology and U.S. jobs to Saudi Arabia without any U.S. control. The U.S. doesn’t have arrangements of this magnitude with any other allies.

Given the early-stage nature of these joint ventures as well as minimal interoperability between Saudi’s current weapons system and potential foreign replacements, Saudi can do little to respond to this proposed legislation other than come back to the table and negotiate with the U.S. in good faith. As one expert noted, “it would take decades to transition away from U.S. and UK aircraft, for example, to Russian or Chinese aircraft. Same is true for tanks, communication and other hi-tech equipment.” It would be a severe challenge, if not downright impossible, for Saudi to execute an overnight short-term sourcing pivot if faced with a ban on arms sales. And any ban could be temporary — until Saudi Arabia reconsiders its embrace of Putin.