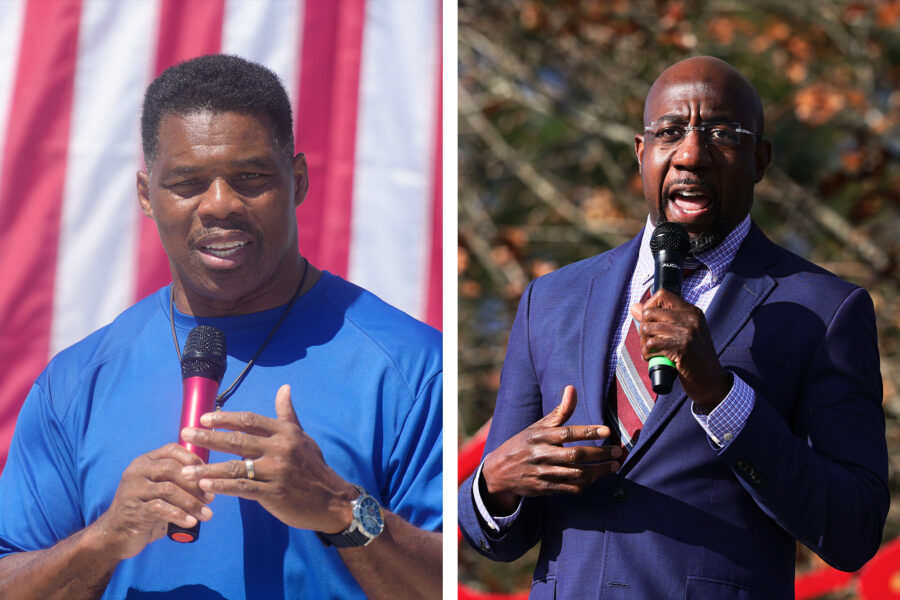 The battle to control the 50-50 Senate is at a stalemate — at least according to the polls.

With 30 days to go until Election Day, polling averages suggest Democrats and Republicans are each poised to win 50 Senate seats. Each party currently has the lead in just one seat currently held by the opposition: The Republican is slightly ahead in Nevada, while the Democrat has the lead in Pennsylvania.

And the polling averages in POLITICO’s four Toss Up races remain tight — including in Georgia, where there’s only been a single, one-day survey conducted since the allegations that GOP nominee Herschel Walker paid for his then-girlfriend’s abortion in 2009.

This is the first weekly check-in on the latest polling in 10 key Senate races this fall. Each capsule includes the current leader in the RealClearPolitics polling average, where the polls stood at this point in the presidential race two years ago, and the eventual winner (and margin of victory) in 2020.

Two new polls last week, from CBS News/YouGov and CNN, showed Democratic Sen. Mark Kelly running ahead of Republican Blake Masters by 3 and 6 percentage points, respectively. That’s also the range of Kelly’s leads in the RealClearPolitics average throughout the duration of the race, which has been relatively stable.

Masters has not led a single public poll — after the primary or before it. And this week’s surveys suggested a comeback would be difficult: In the CNN poll, the percentage of likely voters with an unfavorable opinion of Masters was 51 percent — only 35 percent viewed him favorably. That compares to Kelly’s positive favorable-to-unfavorable rating: 48 percent to 42 percent.

Last week’s only poll in Colorado was from the Democratic firm Data for Progress, which gave Democratic Sen. Michael Bennet a 9-point lead over Republican Joe O’Dea, 50 percent to 41 percent.

Republicans have held out hope that O’Dea could beat Bennet, who won with just a plurality of the vote in 2010 and 2016. But the race hasn’t come online — and Democrats increasing margins here may be too much for O’Dea to overcome.

GOP Sen. Marco Rubio continues to lead Democratic Rep. Val Demings in Florida, by a moderate-though-steady margin. Two new polls released last week showed Rubio ahead by 6 and 7 points — though it’s worth noting that the Mason-Dixon poll was conducted during the landfall of Hurricane Ian, and a Siena College survey was conducted before the storm was bearing down on the state.

It was an eventful last week in Georgia, where Republican nominee Herschel Walker is battling allegations that he paid for an ex-girlfriend’s abortion — the latest in a litany of accusations about Walker and his treatment of women over the years.

But it was a quieter week on the polling front, with just two new surveys released: A SurveyUSA poll for WXIA-TV in Atlanta showed Warnock with an implausible, 12-point lead. And a one-day survey from InsiderAdvantage for WAGA-TV showed Warnock ahead by 3 points.

That InsiderAdvantage poll was designed to measure the fallout from the scandal, though polls conducted entirely in one day can contain additional sources of error. It did suggest a turnaround for the Democratic incumbent, who trailed Walker by 3 points in the previous InsiderAdvantage poll.

Walker has not led a public poll in Georgia since mid-September.

There’s reason to view Warnock’s lead here more credulously: Unlike in some other states, the Georgia polls did not overestimate Biden’s chances two years ago — and they performed similarly well in the Jan. 2021 Senate runoffs.

Two new polls last week staked Republican Adam Laxalt to 2-point leads over Democratic Sen. Catherine Cortez Masto. Laxalt has now been the leader in every poll in the RealClearPolitics database since mid-August — but within a very tight range of 1 to 4 points.

The polls in 2020 were, on balance, accurate in Nevada — meaning Cortez Masto is still within striking distance, but in dangerous territory for an incumbent.

Just four weeks removed from winning a divisive primary — and with four weeks until Election Day — Republican Don Bolduc is struggling to make headway in the polls against Democratic Sen. Maggie Hassan.

Hassan enjoys a roughly 7-point lead in the polling average, and the only poll to show Bolduc within striking distance came from the Republican-leaning Trafalgar Group.

Not only is the North Carolina Senate race tight, but a larger number of voters remain undecided there than in other states. Despite leading the polling average, Republican Ted Budd is only at 45 percent — and last week’s only poll gave him a 1-point advantage, 43 percent to 42 percent.

That poll, conducted by SurveyUSA for WRAL-TV, showed both candidates with favorable and unfavorable ratings all hovering around 40 percent — befitting a race with a double-digit share of the vote still up for grabs.

But there’s also reason to suspect Vance’s lead could be larger than stated here: namely, Ohio polls’ massive underestimation of Trump in 2020.

Fetterman’s lead has been cut in half over the past few months — he once led Oz by as many as 9 points in the RealClearPolitics average — but the Republican still has high negatives that cast doubts on his ability to get much closer. The USA Today/Suffolk poll showed just 34 percent of likely voters have a favorable opinion of the celebrity surgeon-turned-politician, while 51 percent view Oz unfavorably.

No new polls last week, so incumbent GOP Sen. Ron Johnson retains the lead he grabbed nearly three weeks ago after trailing Democrat Mandela Barnes all summer. We’ll get a check-in this week from the Marquette Law School poll, considered among the most reliable public measures of voter opinion in the state.

Wisconsin was also ground zero for the 2020 polling failure, with Trump and the GOP overperforming their standing in pre-election surveys on Election Day.