She determined early on that she wasn’t keen on consultants. One urged Lake distance herself from Trump, who narrowly lost the state in 2020 — a no-go for the staunch Trump backer. (“I’m like, ‘OK, hasta la vista. Thanks but no thanks,’” Lake recalled saying.) Another told Lake she couldn’t win a primary because she had previously backed former President Barack Obama. (“I said, ‘That’s the stupidest thing ever.’”)

She was also cool to TV advertising, reasoning that ads become white noise in a state flooded with political commercials. During the primary, she was outspent on the airwaves 17-to-1 by her rival, former Arizona Board of Regents member Karrin Taylor Robson. Toward the end of the race, Lake decided to stop running TV ads because she thought they were being drowned out and were a waste of money. So far in the general election, Lake has been outspent by Hobbs 7-to-1, according to media tracking figures.

Rather, Lake has used her well-honed skills as a TV communicator to focus on generating free media coverage for herself — sometimes by holding combative press conferences where she rails against reporters. After her husband records the exchanges, the footage is distributed to Lake’s allies in the social media world, such as the prominent far-right commentator Jack Posobiec. Her team believes the viral videos have drawn more attention to the candidate than traditional TV ads would have.

Lake said she anticipates running some commercials ahead of the election, but they won’t be a focus because she felt voters had already come to know her through her anchoring days. Much of the pro-Lake advertising is being done by the Republican Governors Association, which has so far spent around $4 million on a blitz bolstering her.

“I think I’m a unique candidate in that I didn’t need to run as much advertising to let people know who I am, because they already knew who I was,” Lake said.

Within some corners of the party hierarchy, however, there is concern that Lake’s reluctance to advertise could cost her swing voters. While Lake has emerged as a conservative hero — thanks largely to her strident support of Trump, her clashes with the media and her opposition to vaccine mandates — some top Republicans worry that she has turned off moderates who could tilt the election.

But Lake has made clear that she’s determined to run her own race. During the interview, she read aloud text messages she’d received from those in the political class offering advice — outreach, she said, that she had ignored. She said she has repeatedly turned down requests from political professionals looking to meet with her.

Stan Barnes, an Arizona-based Republican strategist who is a longtime friend of Lake’s, said that he had early on urged Lake to soften her hard-edged rhetoric. But he said the candidate had turned him down — a decision, Barnes said, he has come to see as wise.

“She says, ‘Thank you very much, Stan,’ and then goes out and does what she’s been doing,” Barnes said. “Any attempt to change or script or restructure the campaign is counter to what’s in her heart.” 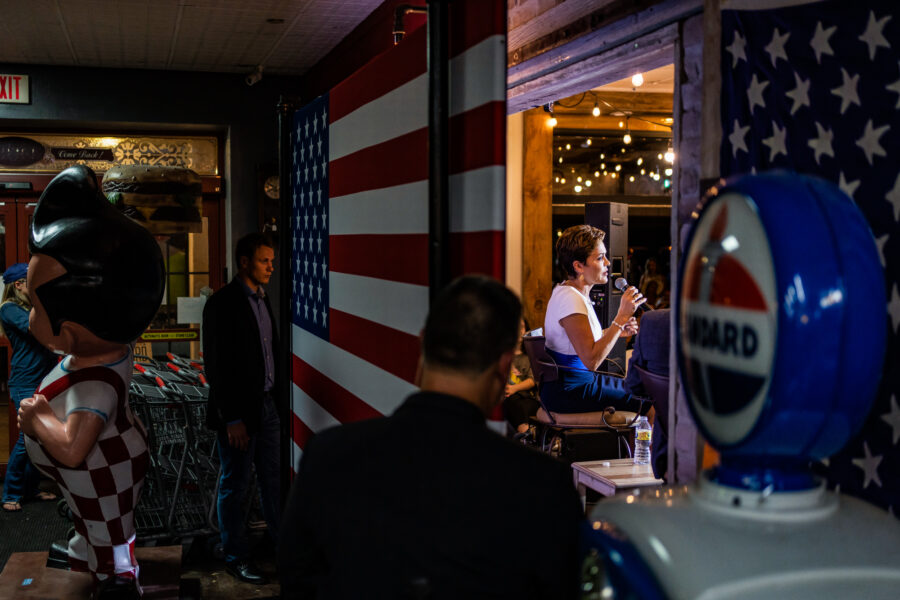 The candidate’s unconventional approach extends to fundraising. While other candidates typically burn up the phone lines to deep-pocketed donors, Lake has taken a largely hands-off approach: During a recent sit-down with contributors in Tucson, attendees expressed surprise that she hadn’t reached out to them.

She often refuses to make a hard sell to donors during fundraising events, saying that while contributions are appreciated, money doesn’t matter as much in politics as it used to. And until recently, Lake’s campaign rarely sent online fundraising solicitations to supporters.

Still, she has begun to win over some of the state’s big givers, many of whom backed her more establishment-aligned primary opponent. Last week, she held a fundraiser at the Biltmore Estates in Phoenix that netted $650,000, according to an organizer.

While other candidates line their campaigns with experienced advisers, Lake’s organization is filled with young aides who are new to politics. The campaign has taken on a collegiate feel: During a visit to her headquarters last Thursday, several teenage staffers typed away on laptops. A nearby wall featured a poster of Lake superimposed onto the cover of an album by the rapper Drake.

And following last week’s fundraiser, Lake staffers set off fireworks outside the home of Robson, her defeated primary opponent who happens to live several doors down from where the event took place.

The roster of top Lake aides includes Dale, a political first-timer and former local TV host who met Lake when she was starting in the TV news business. Dale, who is regularly at Lake’s side, has taken on the role of director of operations. There is also 21-year-old Matthew Martinez, who is taking a year off from college to run the get-out-the-vote effort.

And there is 27-year-old Colton Duncan, who Lake calls “the most important person on the campaign” and likens to the provocateur and Trump adviser Roger Stone. Duncan, who grew up in a trailer park in Lubbock, Texas, was brought in early to help Lake with messaging. He has called himself the “anti-consultant consultant.”

With the race heading down the final stretch, public polls show it is competitive: A CBS News/YouGov survey released Wednesday shows Lake and Hobbs tied at 49 percent, the latest in a string of surveys showing a tight race.

And, as Trump heads to Arizona this weekend to host a rally for Lake, her campaign has drawn the attention of those in the former president’s orbit. Steve Bannon, a former Trump chief strategist who has had Lake on his “War Room” podcast, called her “the most unique” candidate to come out of the pro-Trump movement, and argued that her rise reflected a shift in how campaigns are run.

“I think the game is changing rapidly,” he said. “It’s unbelievable.”