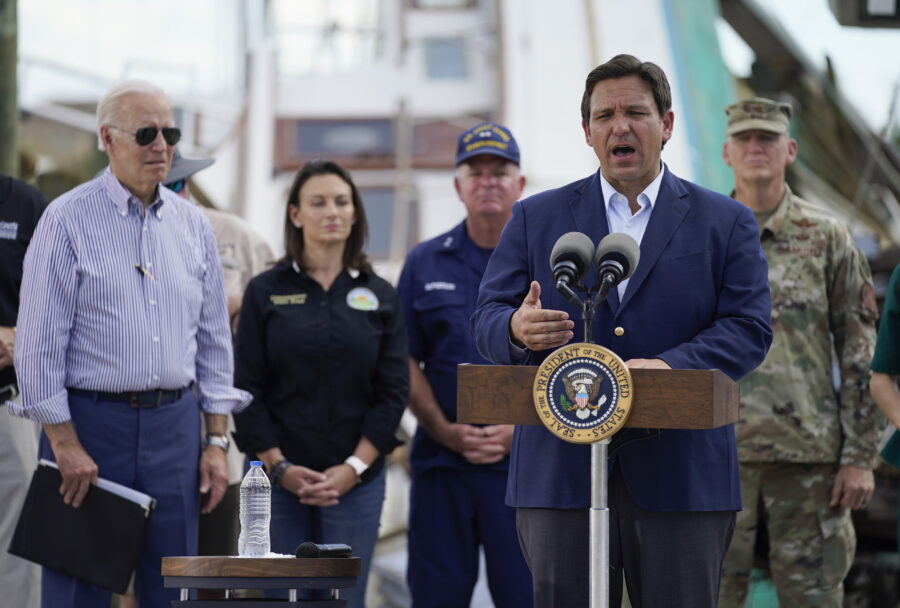 “Mr. President, welcome to Florida. We appreciate working together across various levels of government,” DeSantis said, introducing Biden for remarks.

Biden responded: “Gov and first lady, thank you very much for the hospitality.”

The exchange could only exist in the wake of a natural disaster that requires an enormous bipartisan response. DeSantis has been one of Biden’s fiercest critics as he builds a potential 2024 White House bid. The two have sparred on Covid response, support for the LGBTQ community and, most recently, DeSantis tapping into a $12 million program to fly mostly Venezuelan migrants from Texas to Martha’s Vineyard.

Hurricane Ian, though, is poised to be one of Florida’s most damaging storms in recent memory. The Category 4 storm slammed into southwest Florida with 150 mile-per-hour winds and 10 foot storm surges that destroyed parts of coastal Lee County, and as of Wednesday night left 89 people dead in multiple counties. That number is expected to grow.

Biden was profuse in his praise for DeSantis during his remarks after a Wednesday briefing on the storm. The president’s accolades will likely to help insulate DeSantis from critics who have suggested the governor didn’t do enough to warn residents ahead of the hurricane. Some have pointed to DeSantis’ administration timing and messaging surrounding evacuations ahead of the storm as a potential misstep that could have left people in harm’s way. The New York Times reported that Lee County officials did not follow their own evacuation guidelines, though they have since defended their performance, and DeSantis has publicly supported the local officials.

“I think he’s done a good job,” Biden said on Wednesday when asked about DeSantis’ performance in dealing with the storm. “We have very different political philosophies, but we’ve worked hand-in-glove. In dealing with this crisis, we’ve been in complete lockstep.”

Over 97 percent of the state has power restored, DeSantis said in his own remarks on Wednesday. The governor described a massive effort by search and rescue teams to save 2,500 survivors.

“We are cutting through the bureaucracy,” DeSantis said, thanking those at every level of government for the “team effort.”

For residents of Florida affected by the storm, the most important step now is registering to see what resources they may be eligible for, Biden said. He added that “we’re going to try to speed” up the phone-wait times for help with additional personnel. 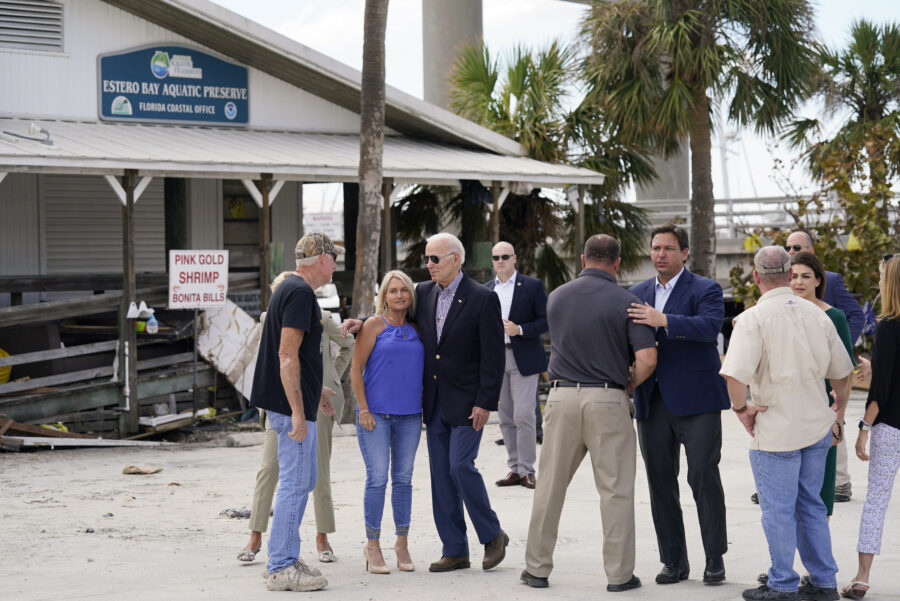 In one odd moment, Biden implied that DeSantis has fully “recognized” global warming, terminology DeSantis does not use. The governor doesn’t ignore climate change and created the state’s first ever Florida Chief Resilience officer. He’s also increased spending on the environmental and openly discusses the threat of rising sea levels.

But DeSantis has previously said that Democrats and others use global warming as a pretext to do “a bunch of left wing things.”

The White House did not immediately respond to a request for comment. DeSantis’ office said it was unclear what Biden was referring to.

The president on Wednesday emphasized that the hurricane was further proof that climate change is leading to natural disasters and “we should do something about it,” describing the destruction he saw in Florida this week — as well as damage he’s witnessed over the last six months from wildfires across the West.

The president, along with first lady Jill Biden, surveyed the damage on Florida’s west coast via helicopter before touching down at Fisherman’s Wharf in Fort Myers at about 2 p.m. DeSantis and his wife, Casey DeSantis, greeted the president and first lady at the wharf, where they walked along the waterfront speaking with a group of other individuals who the White House said were citizens affected by the hurricane.

Biden and DeSantis then moved to a briefing area, where the president spoke with Florida Republican Sens. Marco Rubio and Rick Scott. DeSantis began the briefing shortly after, thanking Biden and his administration for their support before detailing recovery efforts since the storm hit. FEMA Administrator Deanne Criswell and Army Corps of Engineers Commanding Gen. Scott Spellmon also briefed the group.

While in Fort Myers, Biden and the first lady also planned to meet with small-business owners and local residents affected by Hurricane Ian.