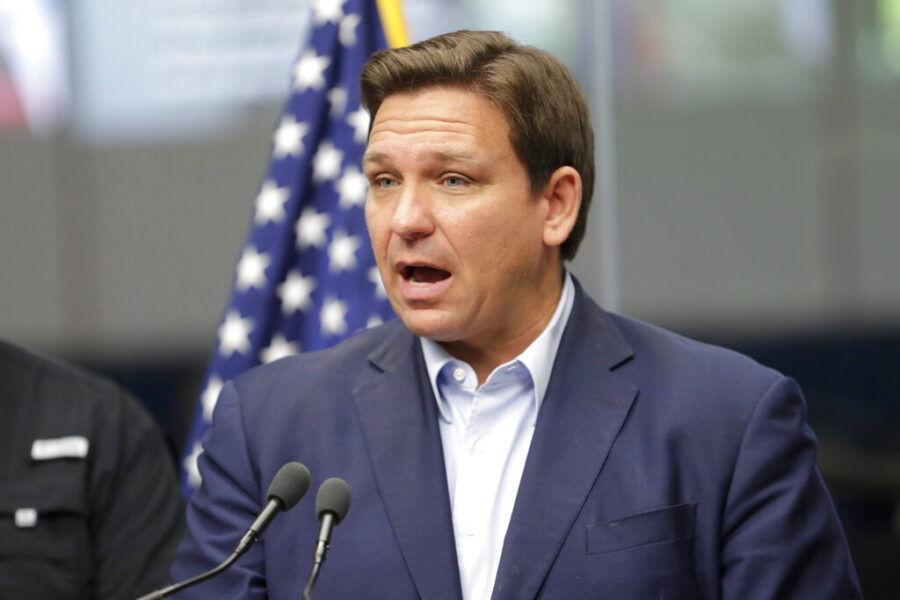 TALLAHASSEE, Fla. — Gov. Ron DeSantis has been a persistent critic of President Joe Biden on nearly every policy front as he moves toward a likely potential 2024 presidential bid. But the Florida Republican likes one thing about the president: his wallet.

Over the past two years, DeSantis’ administration received billions of dollars in emergency federal aid during the height of the Covid-19 pandemic, money that the governor used to fund his top priorities and pet projects.

Florida is now poised to benefit from billions of dollars in additional federal assistance to grapple with the devastating damage left by Hurricane Ian, which could bring a staggering $40 billion of insured losses.

“Ironically, while DeSantis has attacked Biden, he’s benefited from his administration,” said Florida Democratic state Rep. Anna Eskamani, a frequent critic of the governor. “The constant demonization of President Joe Biden by Governor Ron DeSantis has always been politically motivated.”

All governors ask the federal government for assistance after a major natural disaster, regardless of who is in the White House. But for DeSantis, the eagerness to accept the money comes against the backdrop of not only being one of Biden’s biggest critics, but also his past record rejecting federal disaster relief for New York and New Jersey in the aftermath of 2012’s Hurricane Sandy.

Now DeSantis, who is dealing with the aftermath of his first major hurricane as governor, has no such hang-ups about federal funds. He asked Biden for an emergency declaration for all Florida’s 67 counties, which the president approved, freeing up federal money for counties devastated by Hurricane Ian. On Thursday, DeSantis said more federal money would be needed as the storm dumped rain on the Orlando region as it slowly made its way across the state.

“I just spoke with the president this morning and he offered support,” DeSantis said during a Thursday briefing at the state’s emergency operations center. “I told him thanks for this, but because the storm has moved inland and caused a lot of potential damage in the central part of our state, we are going to be asking that those counties to be expanded and included.”

One day later, Biden agreed to the request, expanding the declaration to four Central Florida counties affected by the storm. It brought the total number of countries set to receive waves of federal disaster relief funding to 14.

This is not the first time DeSantis accepted billions of dollars in federal aid to fund high-profile spending items, even as Florida enjoys a $20 billion budget surplus.

Over the past two years, DeSantis’ state budget has included nearly $10 billion from the Biden administration’s federal Coronavirus State and Local Fiscal Recovery Funds, money that the governor used to pay for a wide-range of non pandemic-related programs. Included in those are some of DeSantis’ biggest priorities — and programs that Biden and other Democrats have loudly criticized.

When asked for comment, DeSantis’ administration said they are now focusing on the massive hurricane response.

“Give it a rest with amplifying all the critics,” said a spokesperson. “As the governor said earlier, we have no time for politics or pettiness.”

The Florida governor used interest from that money, totaling $12 million, to fund a migrant transportation program that would pay private contractors to fly migrants from Florida to Democratic strongholds. The governor has already used $615,000 to transport about 50 mostly Venezuelan migrants from Texas to Martha’s Vineyard.

DeSantis used another $50 million this year to fund Florida’s Job Growth Grant Fund, a pot of economic development cash his administration can unilaterally dole out. He put $30 million toward a workforce development program.

Another $200 million from the federal coronavirus funding will be used for a gas tax holiday in October, which the governor frequently touted when chiding record inflation that has plagued the Biden administration. The one-month gas tax holiday goes into effect one month before the November election.

DeSantis also used federal dollars to give teachers and police $1,000 “bonuses” — checks the governor regularly promotes but doesn’t mention the connection to the president.

DeSantis has previously defended using federal dollars by saying Florida was shortchanged because the funding formula prioritized states, such as New York, hardest hit by the pandemic.

Rubio did support a smaller GOP-sponsored package for relief at the time. He has supported subsequent aid packages, sometimes with caveats.

But Rubio missed a 2017 vote for Hurricane Harvey relief because he was preparing for the arrival of Hurricane Irma with his family.

In a statement, he said he would have voted in favor of that $15 billion package “despite significant reservations about some of the other items attached to this legislation.” That included a short-term extension of government funding at the time, which he panned “as an incredibly inefficient way of spending taxpayer dollars.”

While Democrats regularly point out the irony in DeSantis using federal money, he has a few GOP critics as well. Scott, who served two terms as the state’s governor, urged DeSantis to return the federal Covid-19 relief funds last year, saying the federal legislation — which he voted against — was “wasteful.” Scott is also seen as a potential 2024 White House hopeful.

When asked about Scott’s suggestion to return the money, DeSantis during a 2021 press conference responded: “It doesn’t make any sense.”

Caitlin Emma contributed to this report.