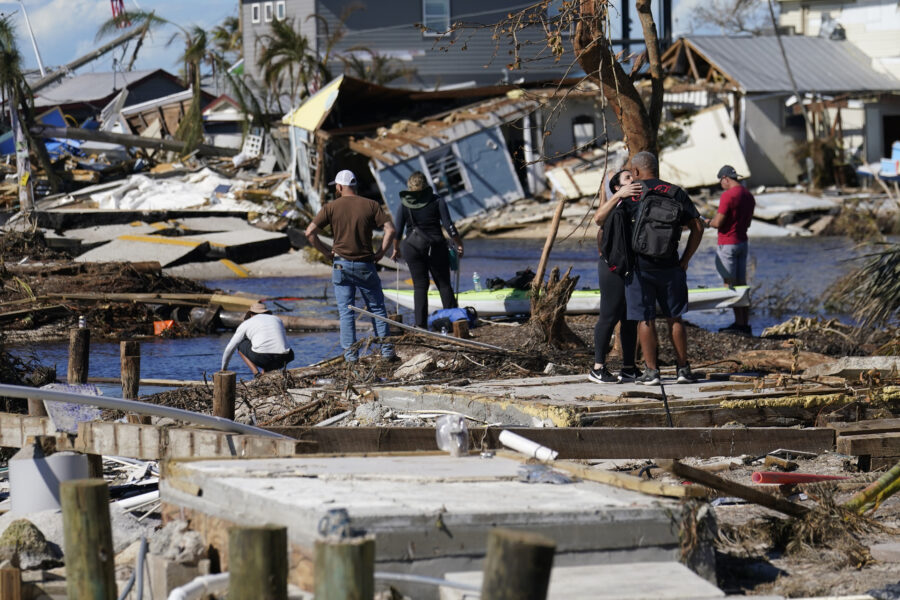 TALLAHASSEE, Fla. — Officials across Florida on Monday were assessing the full extent of the destruction from Hurricane Ian, with fatalities climbing and massive search and rescue efforts continuing days after the historic storm caused catastrophic damage.

The official death tally increased to 68 over the weekend, with the toll likely to rise significantly in the days ahead. The vast majority of those deaths — 45 — were in hard-hit Lee County in southwest Florida. The hurricane made landfall near Fort Myers in Lee County on Wednesday as a Category 4 storm.

Search-and-rescue teams have saved more than 1,600 survivors since the storm struck. Federal and state teams have used helicopters, boats and have gone door to door in some communities searching for people.

One of the biggest issues remaining is restoring power to hundreds of thousands of residents. More than 531,000 homes and businesses are still without power after Ian made landfall near Fort Myers last week with 150 mph winds.

DeSantis, during a Monday evening press conference in Cape Coral, said power has been restored to 95 percent of the 2.2 million people without power, and the vast majority still in the dark are in Lee County.

“This is a massive effort to get the power back on in the state,” DeSantis said, noting there were 42,000 utility linemen stationed across Hurricane Ian’s projected path ahead of the storm’s arrival.

Hurricane Ian is one of the most powerful storms to hit Florida, a state whose residents are accustomed to dealing with extreme storms. Ian weakened after it made landfall but continued to cause massive flooding and wind damage across the state before it exited the state east to the Atlantic Ocean. In some hard-hit areas, the storm leveled buildings and reduced entire city blocks into rubble.

“This has been handled ad nauseam,” DeSantis interrupted as a reporter was asking about evacuations. “Lee County explained what they did … we should focus on what we can do to do good … and stop incessantly talking and casting aspersions they are doing the best job they could with imperfect information.”

He once again asserted that it’s wrong for reporters to ask about evacuations because on Monday, forecasts had the storm making landfall near Tampa Bay, more than 100 miles from where the hurricane first struck.

“It is a little rich from an industry that from Monday all day they were in Tampa Bay saying it was going to be the worst-case scenario for Tampa Bay,” he said.

The storm damaged a critical water main that left hundreds of thousands of residents in Lee County without running water, but Guthrie said that a more permanent fix could be completed in the next few days.

The massive water outage prompted health care officials in Lee County to evacuate at least four facilities. State emergency officials kept Lee Memorial Hospital open by trucking in water from more than 100 miles away in Lakeland. Full water services are expected to be restored this week.

About half of Lee residents whose homes were still standing will see water restored in the next three days, and the entire county should have water by Sunday.

“We’ve laid up a good plan — a good strategy — to get that done,” Guthrie said.

Florida Department of Health Deputy Secretary Kenneth A. Scheppke said more than 7,000 patients were evacuated from 150-plus hospitals, long-term care centers and nursing homes, but at least 22 have since reopened. More than 600 health-care facilities lost power during the storm, and 412 have since seen power restored.

School officials have reopened 46 of the 59 districts that were closed, though districts in hard-hit areas such as Lee, Collier and Hardee counties are assessing damage to buildings and just now are starting cleanup. Some schools are still serving as emergency shelters for storm survivors, and the state has started to consolidate some of the people staying there to shelters where they can stay longer.

“They’re all at different stages, and dealing with different issues,” Florida Department of Education Secretary Manny Diaz said Monday. “From continuing to run shelters, to transitioning out of shelters, to doing assessment of the properties, making sure power is back on, and communicating the needs that they will have in order to get the schools reopened.”