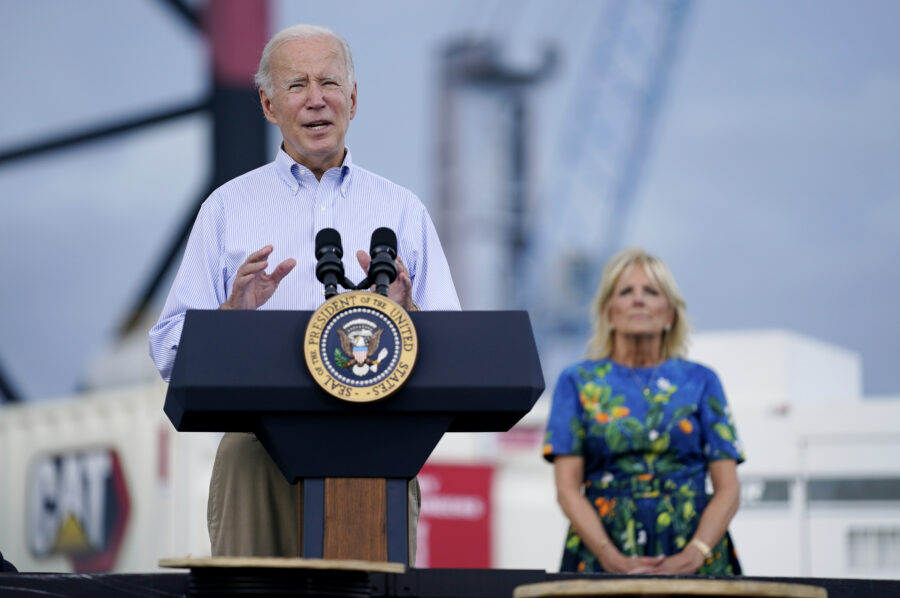 PONCE, PUERTO RICO — Hours after having touched down in storm-ravaged Puerto Rico, President Joe Biden arrived at a steamy school gymnasium adorned with makeshift tables and red and blue tablecloths upon which supplies of food had been set.

There were 10-pound sacks of yellow onions, garlic, boxed juice, rice, nuts, ground corn, and cases of bottled water — all to distribute to victims of Hurricane Fiona, which had battered the island two weeks ago. Volunteers, including first lady Jill Biden, packed the supplies into large, white plastic bags, tied them up and added them to a growing pile.

When Biden entered the gym, the roughly 50 or so people inside applauded. In a suit jacket, blue oxford shirt with open collar and khakis, the president posed for a group photo, shook hands and chatted briefly with storm survivors.

Those in attendance could be forgiven if they were suffering, in that moment, from a bout of deja vu: Five years ago to the day, then-President Donald Trump had visited the island, too. He was there to survey the damage done by Hurricane Maria amid a heightening rift with the mayor of San Juan, Carmen Yulín Cruz, who had grown increasingly frustrated and critical with his hurricane response.

Instead of an indoor basketball court, Trump went to a makeshift supply center at Calvary Chapel. While he took the time to hand out supplies, he also decided to shoot paper towels, as if he were the presidential incarnation of Steph Curry and the arms of the needy in front of him were an inviting basketball net.

“There’s a lot of love in this room,” Trump declared thereafter. He gave his team an A+ grade.

On Monday, there was no paper towel shot-putting. No grade giving either.

The visit, overall, was a study-in-contrast between the last two presidencies. Biden had his Biden-esque moments, declaring at one point that he was “raised in the Puerto Rican community at home politically.” He ran late and, in uncharacteristic fashion, only spent a few minutes inside the exceptionally warm gym hall, which appeared to lack a working air conditioner. One woman inside weaved around the room passing out water.

But away from public view, Biden also spent a half hour with families and officials impacted by the storm. And he went to great lengths to assure Puerto Ricans that “America is with you,” while acknowledging that “they haven’t been taken very good care of.”

“We came here in person to show that we’re with you, all of America is with you,” Biden said, speaking at the Port of Ponce.

How a president responds to natural disasters can be defining moments for their administration. Trump’s trip to Puerto Rico was remembered by the images from inside the Chapel and the feuding with local leaders. Biden’s team, from the moment he stepped off the plane, seemed aware of the contrast that awaited.

“We know that there may have been some issues in the previous administration,” Deanne Criswell, the Federal Emergency Management Agency administrator, said earlier Monday. “We are laser focused on giving [Puerto Rico] the support they need.”

Before he walked into the gym, where a large Puerto Rican flag hung on one wall and a sign for the Hispanic Federation hung beside it, Biden had surveyed storm damage and met with families and community leaders, where he announced more than $60 million in funding through the Bipartisan Infrastructure Law for disaster recovery and preparedness for future storms. He received a briefing on the storm’s aftermath and delivered remarks at the Port of Ponce about the administration’s efforts. The new round of funding Biden announced will be used to shore up levees, strengthen flood walls and create a new flood warning system that will help Puerto Ricans prepare for future threats.

Biden said he’d long felt an intense kinship with the people here, noting his many visits and the fact that he’s from a small and diverse state. There was no tension with local officials; at least none that surfaced. But there were direct requests.

Puerto Rican Gov. Pedro Pierluisi spoke before the president, calling on the Biden administration to extend the federal government’s commitment to pay for 100 percent of disaster response, such as debris removal, for 180 days,up from the 30 days Biden originally promised. The governor talked about the Biden administration’s commitment to Puerto Rico and said he wanted his people to be treated the same as all Americans are, while thanking the president for his attention.

While Criswell told reporters Monday that she didn’t have an estimate for recovery costs in Puerto Rico, Biden vowed to deliver the funds the island needs for its recovery.

After Hurricane Maria, FEMA awarded more than $32.5 billion for two grant programs that fund recovery projects, with the government in Puerto Rico and the U.S. Virgin Islands spending about $7.7 billion as of August, according to the Government Accountability Office.

“I’m confident we’re going to be able to do all you want governor,” Biden said. “We are going to make sure you get every single dollar promised.”

More than 100,000 Puerto Ricans continue to go without power as a result of Fiona. The official number of fatalities on the island stands at 25, but experts fear the death toll could be far higher, especially since some of the most devastated regions of the island remain difficult to or inaccessible due to washed-away roads, mudslides and ongoing power outages.

Five years ago, Trump had told Puerto Ricans they should be proud that only 16 people had died after Maria. But the number continued to rise once he departed. The government of Puerto Rico later said 64 people died due to the storm, but research attributed an estimated 2,975 deaths to the damage the storm caused to the island, including its main infrastructure.

It was the last time a sitting president had visited the island. And the memory of it hung over Biden’s visit.

Karina Claudio Betancourt, director of the Open Society Foundation’s $20 million post-Hurricane Maria project in Puerto Rico, said she would initially say “welcome to Puerto Rico” to Biden before talking to him about why Fiona caused such devastation despite being a “weaker” storm compared to Maria.

“This is the place that five years after Maria we’re still reeling from that hurricane,” she said. “It wasn’t only a natural disaster. It was a political disaster.”

Gloria Gonzalez contributed to this report.