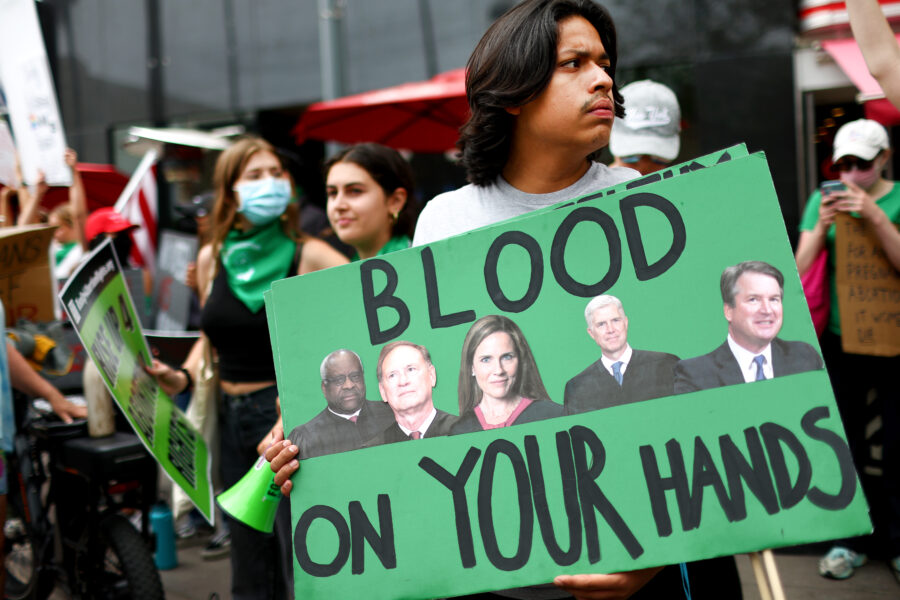 When a nondescript man with a scraggly beard sauntered up to prominent race scholar and professor Cornel West at a religious liberty conference in Rome in July, West wasn’t exactly sure who he was dealing with.

“I walk into this big, old, beautiful castle with these magnificent pictures on the wall and this fellow comes up to me and he said, ‘My name is Sam Alito. Good to see you,’” recalled West. “I kind of looked and said, ‘Alito … has he got a cousin in Italy or something? I know a brother named Alito.’”

West said he was mystified for a few minutes, but soon realized he was dealing with the man who had just authored the Supreme Court’s earth-shaking decision overturning Roe v. Wade.

“We get to the head table … there he is with his lovely wife and I said, ‘My God, my God, it is him.’ And I look on the program and he was giving the keynote,” the professor said.

Alito’s appearance at the University of Notre Dame-organized conference flew under the radar for a week as he was omitted from the list of speakers made public in advance.

The atmosphere of secrecy around Alito’s appearance in Italy and his short-lived beard — gone by the time the justices reconvened last week — were just two indicators of the unusually tense times for the court, which returns to chambers to take up cases Monday.

The normally relaxed season for heading to vacation homes and teaching abroad was marked by the most intense security footing ever for the justices, along with uncommonly public internecine strife among the court’s members, unleashed by the 5-4 decision in June overturning the federal constitutional right to abortion.

Added to that fraught mix was a heaping dollop of suspicion in the each of court’s rival ideological camps about who was responsible for the unprecedented disclosure to POLITICO of a draft opinion in the high-stakes abortion case and uncertainty about an investigation Chief Justice John Roberts ordered into the breach.

Speaking at a judges’ conference in Colorado last month, Roberts sounded exhausted by it all.

“The last year was an unusual one and difficult in many respects. It was gut-wrenching every morning to drive into a Supreme Court with barricades around it,” Roberts said. “I think, with my colleagues, we’re all working to move beyond it.”

Roberts is clearly craving a return to normalcy as the court’s new term opens Monday with arguments on federal powers to regulate water pollution and Delaware’s right to unclaimed MoneyGram checks issued in other states.

However, the stresses of the past year remain evident and won’t be erased simply by the justices throwing themselves back into their work or by welcoming their newest colleague, Justice Ketanji Brown Jackson, as they did last week.

For one thing, all the justices remain under much tighter security than in previous years. During a recent trip to Chicago, Justice Elena Kagan was accompanied by about a half-dozen security personnel. Longtime court watchers said that’s a much more substantial detail than justices used to get on trips out of Washington. Indeed, some often traveled with no bodyguards at all.

Before Kagan’s appearance at Northwestern University’s law school last month, security personnel swept through the room, ordering those standing in the rear and aisles of the auditorium to take seats or proceed to an overflow area.

“The Secret Service won’t allow anyone to be standing,” one organizer announced. (Security for justices is provided by the U.S. Marshals Service and the Supreme Court Police.)

The directive was quickly defied as the audience jumped to its feet when Kagan entered.

The justices remain under 24-hour guard at their homes, some of which continue to see raucous protests over the court’s June ruling wiping out the federal guarantee of abortion rights. In early July, the court also sent unusual letters to officials in Maryland and Virginia, urging them to crack down on the demonstrations under local laws and regulations.

People close to the justices say some have chafed at the increased security, while others have complained that aspects of the protection arrangements are too lax or ham-handed.

When a California man stepped out of a taxi in front of Justice Brett Kavanaugh’s Chevy Chase, Md., home in June at 1 a.m., deputy U.S. Marshals stationed on Kavanaugh’s lawn spotted him but did not confront him, according to court documents. The man, Nicholas Roske, then made his way to a home on a nearby street close to Kavanaugh’s home and was arrested only after he called his sister to say he was planning to kill the justice.

When police arrived, they found in Roske’s bags a pistol and ammunition, a tactical knife, pepper spray, various tools and padded hiking boots that may have allowed him to move around a home in near-silence.

Despite the continuing threat, the court is set to partially re-open to the public Monday after a two-and-a-half-year closure spurred initially by the coronavirus pandemic but prolonged by anger over the abortion ruling. Members of the public will be admitted to the court’s arguments this month, but the building remains closed to the thousands of tourists who typically throng its halls and frequent the gift shop and cafeteria. No date for a broader reopening has been announced.

Even as the term opens, two of the justices show no sign of backing away from a public quarrel that broke out following the abortion ruling. Kagan has used at least four speaking engagements in the last few months to charge that the Supreme Court’s declining stature in opinion polls is a result of perceptions that the justices are indulging their personal policy preferences rather than sticking to recognized principles for interpreting the Constitution and federal statutes.

Kagan’s comments about the Supreme Court’s legitimacy seemed to draw a rebuttal from Roberts, who contended that unpopular decisions shouldn’t cast doubt on the legitimacy of the court.

“It goes without saying that everyone is free to express disagreement with our decisions and to criticize our reasoning as they see fit. But saying or implying that the court is becoming an illegitimate institution or questioning our integrity crosses an important line,” he said in a statement to the Wall Street Journal.

The justices often respond to questions about their polarization with banal anecdotes about shaking hands before arguments or eating lunch together at the court while talking about subjects other than the pending cases. But Kagan suggested last week that a willingness to engage in small talk about family events or baseball isn’t a substitute for more substantive engagement she believes is eroding at the court.

Amid the numerous signs of a fractious high court, some of the justices kept to their routines this summer, while others stayed largely out of public view. Justice Amy Coney Barrett spoke at a business conference in Big Sky, Mont., while Kavanaugh attended judges’ conferences in Kentucky and South Dakota, according to CNN.

Roberts spent much of the summer at his second home on an island off the Maine coast.

“He was up here for a good eight weeks,” said a neighbor who asked not to be named. “I think that he found some restorative rest here … He led a very normal life, came to the mainland every day, went to the coffee shop, played golf periodically and went out on the boat.”

But, for some, the court’s contentious decisions were never far behind.

Videos of the Rome event Alito popped up at show him joining in some of the tours with other attendees like West and attending other panel discussions and speeches.

However, the left-leaning West said he declined to join in when the rest of the attendees gave Alito a standing ovation at the black-tie gala dinner. The professor, now with Union Theological Seminary in New York, said he also alluded to the abortion decision and the threats Alito now faces.

“I couldn’t give him a standing ovation. We’re in serious battle,” West said. “I shook his hand and said, ‘God bless you and your precious family. You know that you and I are in struggle?’ And he said, ‘Yes.’”

Erin Smith contributed to this report.