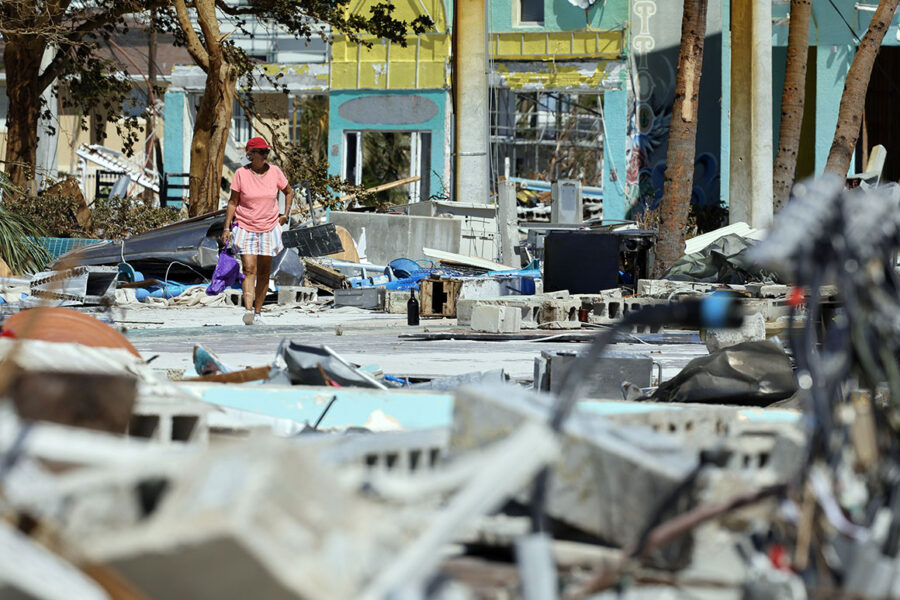 The restoration of power in Florida after Hurricane Ian faces a host of obstacles, including floodwaters and wreckage blocking crews from getting to the hardest-hit areas.

It’s also up against history: The state’s utilities have spent years trying to make their electric systems more resilient to extreme weather, only to see Ian’s 150 mph winds and 12-foot storm surge destroy much of what they built.

More than 1.6 million Florida customers remained without power Friday evening, after Ian had washed ashore in South Carolina. Blackouts hit more than 300,000 customers in the Carolinas.

Utility companies still have no estimate of how long it will take to put the lights back on for all those Floridians. Duke Energy Florida said, for example, that wind was still too strong Thursday to deploy bucket trucks to help work on power lines.

Here are four things to know as Florida works to recover from the Category 4 hurricane:

If any state is best prepared for hurricanes, it’s arguably Florida.

The peninsula-shaped state juts out into warm waters with the Atlantic Ocean on its east and the Gulf of Mexico on the west, making it a prime target for tropical storms and hurricanes spinning off the coast of Africa.

That means Florida, and those in charge of its infrastructure, have had plenty of experience in prepping for storms and cleaning up after them. 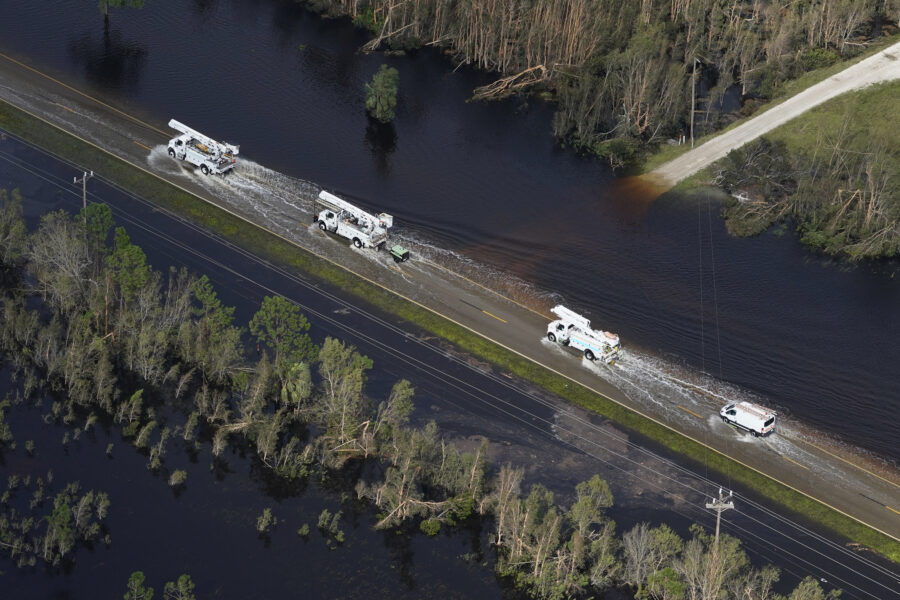 “Florida, because of the nature of the weather that they see, has a lot of experience with this, and as a result, is particularly well prepared,” said Scott Aaronson, a senior vice president of the Edison Electric Institute, the trade group for the nation’s investor-owned electric utilities.

It took a few hard lessons, however, before the state and its power companies began to make significant changes.

Back-to-back hurricanes in 2004 and 2005 pummeled Florida, drawing the ire of lawmakers.

That led state utility regulators to require electric companies to come up with storm-hardening plans that included a more succinct schedule for vegetation management and shoring up areas around hospitals, schools and other critical infrastructure. In some areas, that also meant burying power lines.

“Storm hardening has been a journey for us,” said Bryan Garner, a spokesperson for Florida Power & Light, during a Thursday afternoon media briefing from the electric company’s storm center. “We’ve been on this journey for well over a decade.”

FPL is the state’s largest electric company, serving almost all of Florida’s east coast, much of the southwest and the Panhandle.

During a period roughly from 2005 to 2015, the utility, among others in the state, worked to replace wooden poles with concrete ones, buried power lines underground and made sure that its infrastructure was “one of the most resilient grids in America,” Garner said.

Eric Silagy, FPL’s chief executive, said earlier this week it is “indisputable” that the billions of dollars the company has spent on grid hardening since hurricanes in 2004 and 2005 has paid off “significantly” (Energywire, Sept. 28).

Then came Hurricane Irma. The Category 4 storm plowed through Florida in 2017, leaving millions without power. The storm also led to 12 deaths at a South Florida nursing home after it lost air conditioning.

FPL alone initially reported 2 million customer outages from Irma, and a spokesperson said the restoration would be the most complex in history for the company and the country (Energywire, Sept. 11, 2017).

The outcry led state lawmakers to file a number of bills aimed at making the grid more resilient and promoting clean-energy policies designed to keep the lights on during natural disasters. But few of those proposals gained traction in the Republican-controlled Legislature.

And as the storms become more intense, the utilities’ improvements haven’t been enough. Electricity officials have stressed this week that it is impossible to have a hurricane-proof power grid.

“A storm like this is devastating, and it’s going to impact thousands and thousands of people,” Garner said.

Hurricane Michael, which slammed into Florida’s Panhandle a year after Irma, prompted a new effort by Florida’s electric companies to make their grids more resilient to natural disasters. For FPL, that has meant continuing to replace any remaining wooden poles with steel or concrete ones and working on cheaper ways to bury more of its distribution system.

Now worries are emerging about the supply of critical electrical components.

Electric companies maintain what’s known in the industry as a “storm stock” — hundreds of thousands of poles, transformers and other supplies as they plan for major storms. The increase in intensity of hurricanes is just one reason the industry has raised concerns about a “misalignment” of supply and demand, EEI’s Aaronson said (Energywire, Aug. 22).

A host of factors added to concerns about the supply chain, he said — including investments in the clean energy transition, labor issues, inflation, the war in Ukraine and the recovery from the pandemic.

The average lead time to procure distribution transformers jumped from roughly two to three months to a year between 2020 and 2022, according to municipal power providers that are members of the American Public Power Association.

This has led as many as one in five public power utilities to defer or cancel infrastructure projects, APPA said in an email to POLITICO’s E&E News.

“What we’re hearing from our members is that when faced with a major outage event, things get tight,” said Tobias Sellier, an APPA spokesperson. “When you look at multiple events, it gets really concerning.”

Indeed, one-quarter of the public power utilities that responded to APPA’s survey reported “high risk” of running out of stock of at least one voltage class of transformers.

“With the long lead times we’re seeing, the concern is that even with sharing (resources), eventually the stock will run out before these long-lead orders come in,” Sellier said.

Ian left a lot of wreckage in its wake

Gov. Ron DeSantis said this week that crews would be clearing debris and trees from roadways to allow utility trucks to pass through so they could get to restoration sites quickly.

In addition to wind, flooding in Central Florida also has been a challenge, said Duke Energy Florida, which supplies electricity to St. Petersburg and much of central and northwestern Florida.

Electric companies began restoring electricity, when possible, even as Ian’s winds were building Tuesday and continued after the storm made landfall Wednesday. Thursday was the first day it was safe to begin assessing damage to power plants, solar arrays and the rest of the power grid, however.

Heavy rain and flooding as well as the continued threat of tornadoes are “still challenges that we’re still grappling with across the state,” FPL’s Garner said Thursday.

Ian’s damage was catastrophic in some parts of Florida.

Along the coast in Fort Myers, homes and businesses were ripped off their foundations and reduced to rubble, and fires were burning in some of the wreckage. A section of a causeway leading to Sanibel Island, where more than 6,000 people normally live, collapsed into the water and left the community cut off.

As it surged inland, the storm dumped more than a foot of rain into areas that had already been saturated, leading to heavy flooding as far inland as Orlando, more than 100 miles from the landfall site on the Gulf Coast. 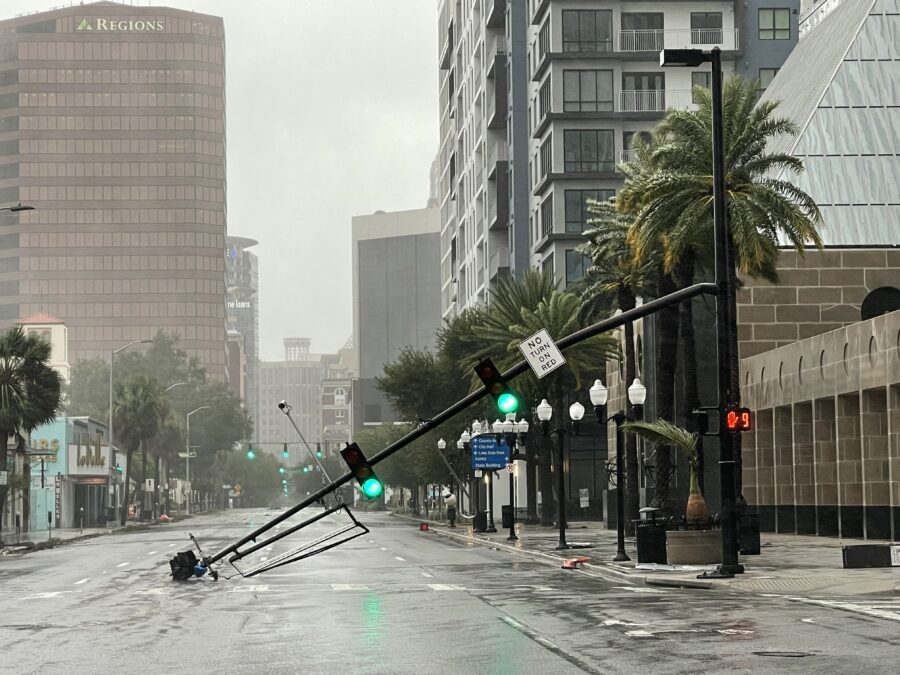 The National Weather Service said Ian was tied with other storms as the fifth-strongest hurricane to hit the U.S., and the data firm RMS said flooding tied to the storm will likely set records.

Tidal gauges near Naples recorded their highest levels in the 50 years that data has been collected, RMS said.

The Peace River reached a record-high level near the town of Zolfo Springs, which is more than 50 miles inland, and the water was still rising in some areas, said Jeff Waters, a staff product manager at RMS.

“A lot of these rivers haven’t even crested yet, and some of them are already at records,” he said in an interview.

Waters cautioned that it’s difficult to tell if climate change is driving a trend of busy hurricane seasons in recent years. Ian’s damage, though, fits with what scientists have predicted for a warmer world: stronger and wetter hurricanes, though not necessarily more of them.

“This business about very, very heavy rain is something we’ve expected to see because of climate change,” said Kerry Emanuel, an atmospheric scientist at the Massachusetts Institute of Technology. “We’ll see more storms like Ian.”

The storm could give Florida a chance to build a more resilient grid, said Christopher Burgess, a researcher at RMI, the clean energy firm formerly known as the Rocky Mountain Institute.

Utility companies could incorporate more solar power and batteries onto their systems, which can be turned on more quickly after a shutdown, he said. And they could divide the grid into smaller segments, which will allow them to bring homes and businesses back online faster.

The Inflation Reduction Act passed this year by Congress, H.R. 5376 (117), includes billions of dollars in funding for renewable energy and upgrades to electric transmission systems around the country.

“We’re going to be able to redesign the grid, put all kinds of other options in the grid,” Burgess said.

The drumbeat of stronger hurricanes should be a wake-up call, even for states like Florida that have a history of preparing for storms, said Alison Silverstein, a former staffer at the Federal Energy Regulatory Commission who studies grid issues.

Companies and governments should assess their vulnerabilities over a 20- to 40-year period and plan for the worst, she said.

“The stakes aren’t just about dollars here, they’re about human lives and misery and societal and economic well-being, and the cost of additional climate change preparation and mitigation pales next to the costs of failing to do so,” Silverstein said in email.

A version of this report first ran in E&E News’ Energywire. Get access to more comprehensive and in-depth reporting on the energy transition, natural resources, climate change and more in E&E News.

This report includes material from The Associated Press.