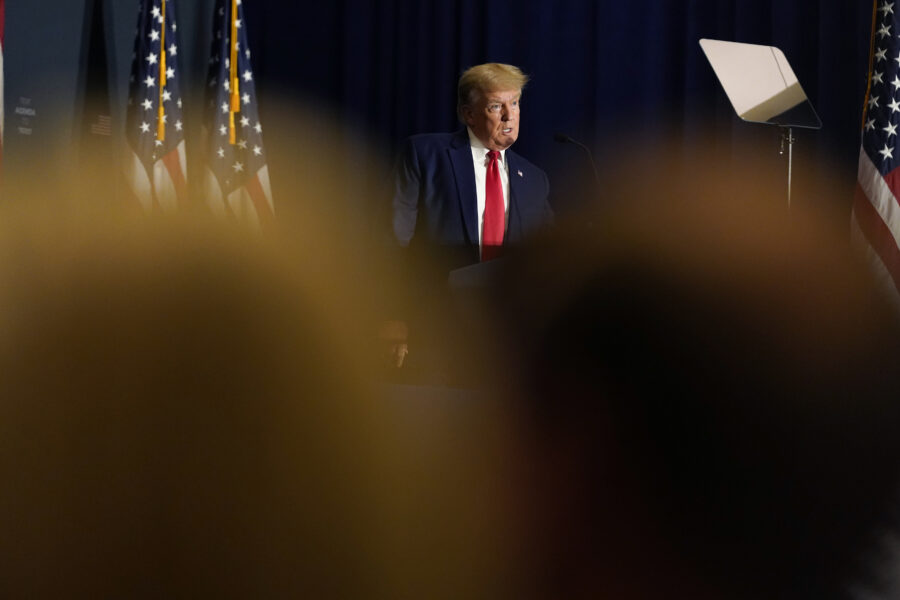 Donald Trump’s hefty stack of legal woes is piling up even more as the former president’s Florida estate became the subject of an FBI raid and as he was forced to sit for a deposition with the New York attorney general’s office.

The FBI on Monday executed a search warrant at Trump’s Mar-a-Lago home in Florida as part of a Justice Department inquiry into alleged mishandling of White House records. Then on Wednesday, Trump pleaded the Fifth Amendment, refusing to answer questions from the office of New York Attorney General Letitia James in her probe of his family’s real estate business.

Trump is also among the prominent Republicans whom Justice Department investigators are asking about as they look into whether crimes were committed to interfere with the electoral vote count on Jan. 6, 2021, according to a person familiar with the probe.

While at least two former top White House officials have appeared before a grand jury recently, it’s not yet clear whether Trump is, or will become, the target of a federal criminal probe. To add even more to the list of probes edging closer to the former president, he is also under an Atlanta-area grand jury investigation by a local prosecutor.

The Justice Department is seeking information about a host of well-known allies in Trump’s effort to disrupt the transfer of power and claim a second term he didn’t win. Federal prosecutors revealed on July 27 they had obtained a new search warrant to access the phone of one of those allies, attorney John Eastman.

Meanwhile, the Jan. 6 select committee is still pursuing wide-ranging inquiries into Trump’s conduct and preparing to reveal reams of evidence to federal prosecutors as well.

“We’ve spoken a lot about accountability,” said Rep. Pete Aguilar (D-Calif.), a member of the select panel on the Capitol attack by Trump supporters. “And in order for that, for there to be true accountability, the Department of Justice may have to act.”

DOJ has signaled particular interest in the bevy of lawyers who surrounded Trump during his final weeks in the White House — including Eastman, Rudy Giuliani and Jenna Ellis. Federal grand jury subpoenas that went out in recent months to witnesses in Georgia and Arizona cited potential contacts with Giuliani, Eastman and Ellis. The Washington Post first reported on the Arizona subpoena, and a person familiar with the Georgia document shared information about its contents with POLITICO. 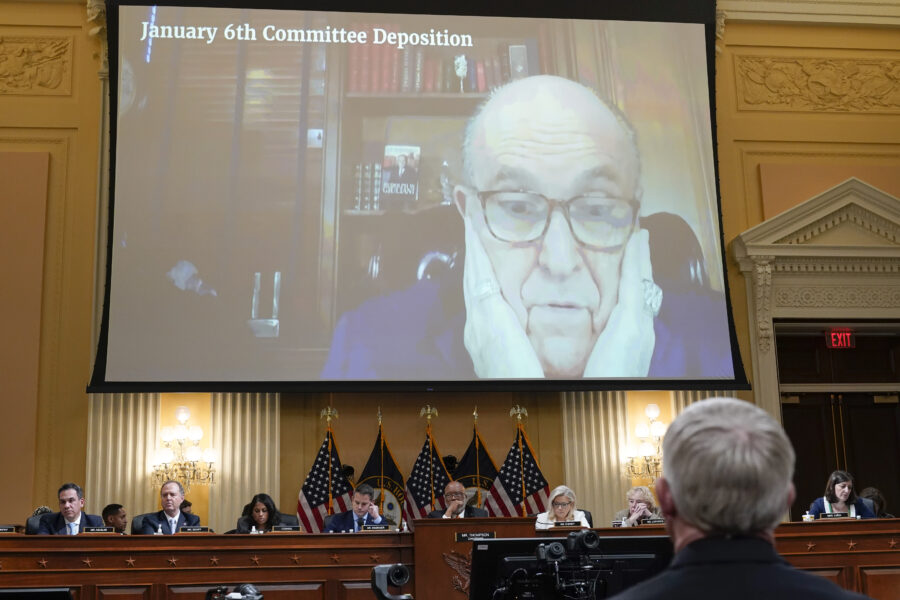 But DOJ’s interest in that strategy may come with its own built-in challenges. Tim Parlatore, a lawyer for the former commissioner who also represents Trump on a separate matter, told POLITICO that he would move to quash any DOJ subpoena of Kerik.

“He was a member of the legal team, so a large portion of his knowledge would be privileged and therefore something the DOJ is not permitted to look into,” Parlatore said.

And Trump’s legal exposure isn’t just of the federal criminal variety. He still faces a civil probe by the attorney general in New York as well as an investigation by the district attorney of Georgia’s Fulton County into efforts by his backers to influence that state’s electoral votes.

He’s also the subject of sweeping lawsuits by members of Congress and Capitol Police officers who blame him for the violence of Jan. 6.

In short, Trump is where he’s been for much of his political life: at the center of intense criminal and legal controversies. The question is, will this time be different?

Here’s a rundown of the accelerating criminal and civil investigations aimed at Trump, who’s openly mulling when to announce a third presidential campaign:

The Justice Department on Monday pushed forward with its inquiry into the movement of boxes labeled as classified to Trump’s Mar-a-Lago resort after the end of his presidency. The FBI’s raid of the estate — which resulted in the seizure of paper records — was a historic step for DOJ, marking the first time a former president has faced such a public law enforcement action.

The inquiry had been in the works for months, but largely faded into the background amid Trump’s other legal woes — until Monday’s raid. The National Archives and Records Administration had said in February that it had recovered 15 boxes of presidential records from Mar-a-Lago, including some marked as “classified national security information.” The Archives also confirmed at the time that it was in touch with the Justice Department about the recovered documents and was working to recover social media records that were not preserved by the Trump administration.

Federal prosecutors have also recently questioned two ex-aides to former vice president Mike Pence. Both were in the West Wing as Trump lobbied Pence to disrupt the certification of Joe Biden’s victory.

Former Trump White House aide Cassidy Hutchinson is also cooperating with the DOJ probe, according to a person with knowledge of the matter. ABC first reported that news.

In addition, federal agents last month raided the home of Jeffrey Clark, a DOJ official whom Trump considered appointing as acting attorney general in the days before Jan. 6. The same week, agents seized the cell phone of Eastman, a conservative attorney who developed Trump’s fringe legal strategy to overturn the election on the same day Congress was set to certify Biden as its winner.

Both actions were connected to an inquiry by the DOJ inspector general, who has authority to investigate matters connected to department employees. But on Thursday, Assistant U.S. Attorney Thomas Windom appeared on the docket of the Eastman case, suggesting the matter is being handled by the same prosecutorial team investigating the false elector issue.

Subpoenas recently obtained by the Post show that prosecutors have asked grand jury witnesses to share any information they have about Trump’s effort to remain in power despite losing reelection. These developments indicate DOJ has been eyeing Trump’s actions for months as part of its broader probe.

That inquiry has focused in part on the state Republican Party chairs and dozens of pro-Trump activists who falsely claimed to be legitimate presidential electors even though Biden had won their states’ popular votes. DOJ last month uncorked a batch of grand jury subpoenas aimed at several of those false electors, who were a pillar of Trump’ efforts to subvert the 2020 ballot.

The Jan. 6 select committee has shown Trump played a direct role in the Eastman-generated push to get Pence to consider slates of “alternate” pro-Trump electors. The then-president connected Eastman with Republican National Committee Chair Ronna McDaniel in December 2020 to seek her help with the plan.

Prosecutors have eyed other elements of pre-Jan. 6 activity as well. “Stop the Steal” founder Ali Alexander, who helped organize pro-Trump events that preceded the attack on the Capitol, testified to a grand jury in April.

Willis recently subpoenaed a long list of Trump’s closest allies connected to the effort to overturn the 2020 election, including Eastman and Giuliani, as well as attorneys Cleta Mitchell and Kenneth Chesebro; Sen. Lindsey Graham (R-S.C.); and Rep. Jody Hice (R-Ga.). 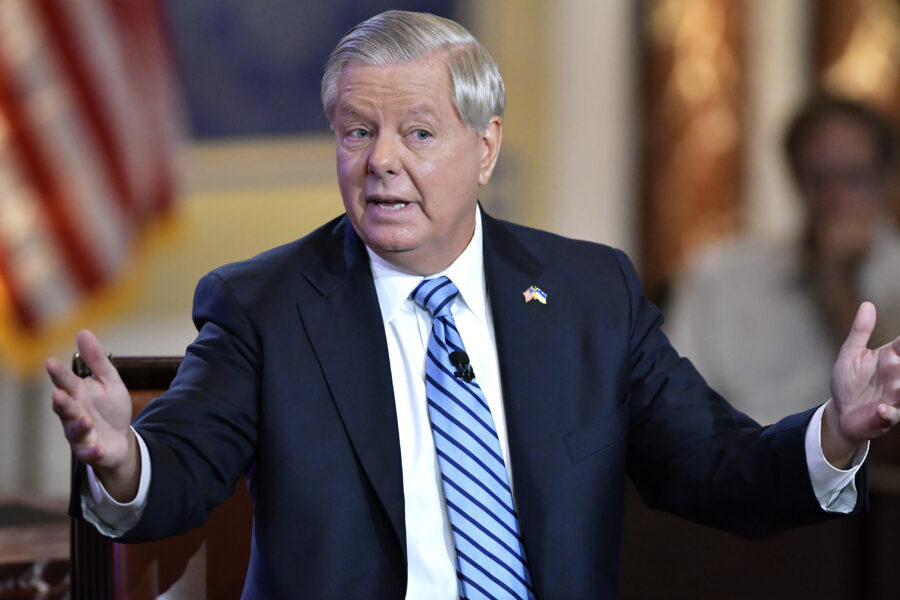 The county DA has also indicated in court that 16 Trump allies who falsely claimed to be legitimate presidential electors are criminal targets of her investigation, including David Shafer, the chair of the Georgia GOP.

Willis suffered a setback Monday when the judge overseeing her probe dinged her for a conflict of interest, noting that she had held a fundraiser for the political opponent of one of the false electors, state Sen. Burt Jones. But the investigation appears to be moving ahead, with depositions on the books over the next few weeks.

Willis is homing in on Trump’s effort to pressure Georgia Secretary of State Brad Raffensperger to “find” the number of votes he needed to overturn Biden’s victory in the state. Raffensperger resisted, describing his experience on that call during public testimony to the Jan. 6 committee last month.

Her probe into that episode appears to have expanded to include other elements of Trump’s bid to reverse his defeat, including the attempt to appoint false electors.

Trump’s decision in 2019 to give up his life-long legal residency in New York and move to Florida doesn’t seem to have lessened the intense interest prosecutors there have shown in his activities. An investigation by New York Attorney General Letitia James into Trump’s business dealings, particularly around real estate, has entered a critical phase.

In February, a state judge ordered the former president, son Donald Trump Jr. and daughter Ivanka Trump to sit for sworn depositions in the probe, which was triggered at least in part by former Trump lawyer Michael Cohen telling Congress that Trump systematically inflated the value of his properties when seeking bank loans and diminished the valuations for tax purposes.

The Trumps unsuccessfully fought the demands in court. Trump on Wednesday refused to answer questions in his deposition with James’ office, invoking his Fifth Amendment right against self-incrimination. Donald Trump Jr. and Ivanka Trump did not plead the Fifth in their depositions just days prior.

James has only limited criminal authority, so her investigation seems to be a precursor to a potential civil lawsuit against Trump or his business. Trump’s lawyers have stressed that James is cooperating with the Manhattan district attorney’s office, which has broader criminal powers.

After a lengthy investigation, prosecutors from that office filed criminal tax and fraud charges last year against Trump’s business empire and its longtime chief financial officer, Allen Weisselberg. Defense attorneys scoffed at the charges as trivial, including claims that the Trump Organization paid for apartment rentals and for Weisselberg’s grandchildren’s school tuition without reporting those amounts as income to employees.

The good news for Trump

One upside for the former president out of Gotham: The chances of the criminal tax and business fraud case expanding to cover more defendants or charges seem to have vanished in recent months.

When Alvin Bragg Jr. took over in January as Manhattan district attorney, he was reported to be skeptical of an aggressive effort to expand that case to include Trump and perhaps others as defendants. Indeed, Bragg was so dubious about those efforts that the lead prosecutors on the case, Mark Pomerantz and Carey Dunne, resigned abruptly in protest in February.

Pomerantz said in a resignation letter published by the New York Times that Trump was guilty of “numerous felony violations.” And the veteran prosecutor blasted Bragg for backing away from the case. “I and others believe that your decision not to authorize prosecution now will doom any future prospects that Mr. Trump will be prosecuted for the criminal conduct we have been investigating,” Pomerantz wrote.

The firm and Weisselberg pleaded not guilty to the charges and are awaiting trial in state court in Manhattan.

And another of the most formidable investigations Trump faced has all but vanished: the Manhattan district attorney’s probe into possible tax violations on the part of the former president.

When Bragg Jr.’s predecessor Cy Vance was district attorney, it appeared he had put together a courtroom-ready case against Trump. But after Bragg’s swearing-in this year, two top prosecutors focused on the office’s Trump probe resigned. They indicated that this was because Bragg had chosen not to pursue charges against the former president.