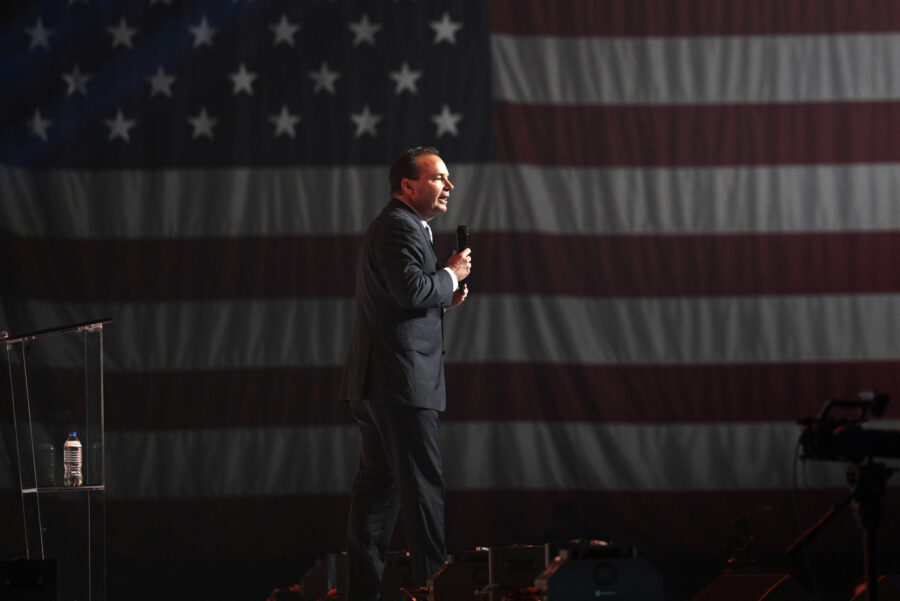 Utah is home to the Great Salt Lake, the NBA’s Jazz and the Church of Jesus Christ of Latter-day Saints. Oh, and the strangest Senate race in America.

There’s Evan McMullin, a former presidential candidate who’s convinced Utah Democrats to not run a candidate while saying he’d buck both Chuck Schumer and Mitch McConnell to become a one-man caucus if he’s elected. Then there’s incumbent Sen. Mike Lee, a pugnacious two-term conservative who once detested Donald Trump so much that his 2016 presidential pick was … McMullin.

Awkwardly stuck in the middle: Sen. Mitt Romney, whose neutrality in the race McMullin “greatly appreciates.”

McMullin is running as an independent in the mold of Romney or Sen. Joe Manchin (D-W.Va.), a novel strategy that requires support from Democrats, independents and anti-Trump Republicans in a deep-red state. He says the race is “close,” citing public polls showing him within 5 points; during an interview, Lee handed over an internal poll showing him up by 14.

Even as a clear underdog, McMullin is making it the most competitive Utah Senate race in perhaps 30 years. It’s a remarkable test of McMullin’s unproven theory that he can topple a conservative by running a one-on-one race with no Democratic spoiler. The matchup is as much about the last six years of the Republican Party — and Lee’s place in it — as it is about McMullin’s half-court heave of a political strategy. 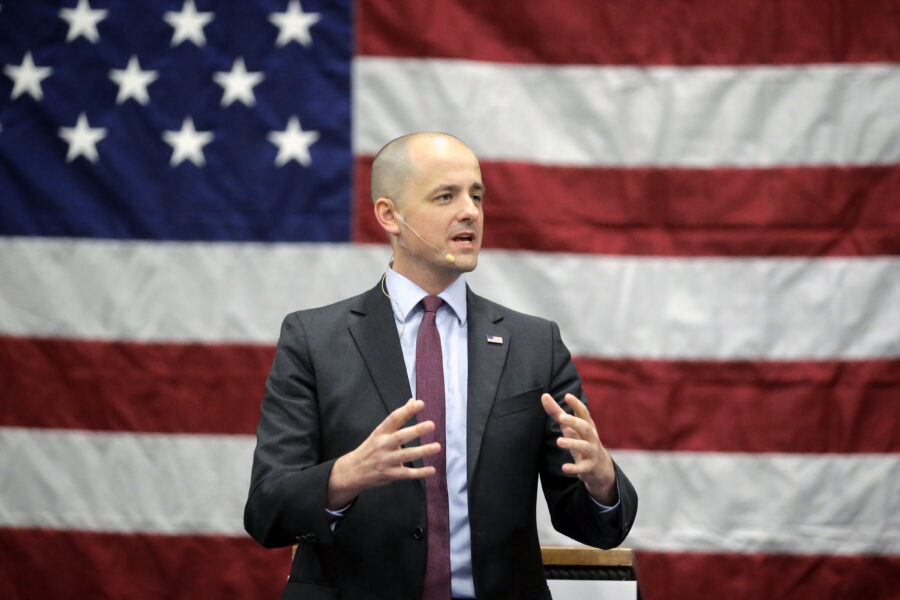 “I’m taking it very seriously,” Lee said in an interview. “It’s still closer than I’d like it to be.”

During a 35-minute interview, McMullin says his state deserves two Romneys and vowed that “I will be in a coalition in the Senate as I am in Utah, with other pro-democracy senators.” Yet how he’d make that work without joining either the GOP or Democratic side of the aisle is a nagging question.

Even if the Senate ends up 50-49 next year with his one vote swinging control of the chamber from one party to another, McMullin underscored that he would not caucus with either party. Since the 1950s, independents elected to the Senate have caucused with either Republicans or Democrats, according to the Senate Historical Office.

McMullin insisted he would still receive committee assignments despite his stance. Lee scoffed disapprovingly at that: “I don’t think anyone knows how that would work, because it isn’t done.” A Sen. McMullin, the Republican said, is in a “no-man’s land.”

Several Senate Republicans privately believe if Lee has a vulnerability, it’s his “heck no” attitude that results in fewer home-state accomplishments than an incumbent might like come reelection time. McMullin hammers Lee as someone who “gets nothing done for Utah.”

Going strictly by the numbers, Lee is one of the most reliable “no” votes in the Senate. At times he’s tag-teamed with Sen. Ted Cruz (R-Texas), including on a fight to defund Obamacare that ended in a 2013 government shutdown.

“Yes, I vote no a lot,” Lee explains. “A lot of bills that are coming forward are harmful to the American people and horrible to Utah.”

Part of the race is also hinging on Jan. 6, 2021. Lee’s text messages favorably discussing Trump’s legal challenges to the 2020 election are becoming a campaign-trail cudgel for McMullin, who argues that his rival betrayed party principles to support the former president’s baseless claims.

“When you advise spurious legal challenges to a free and fair election that were designed to convince tens of millions of Americans that the election was stolen … that is not what a constitutional conservative does,” McMullin said.

Lee counters that he was merely exploring the validity of the Trump team’s “unusual and surprising” legal arguments about widespread fraud: “So I made phone calls. The rumors were not true. And I voted to certify the election.” 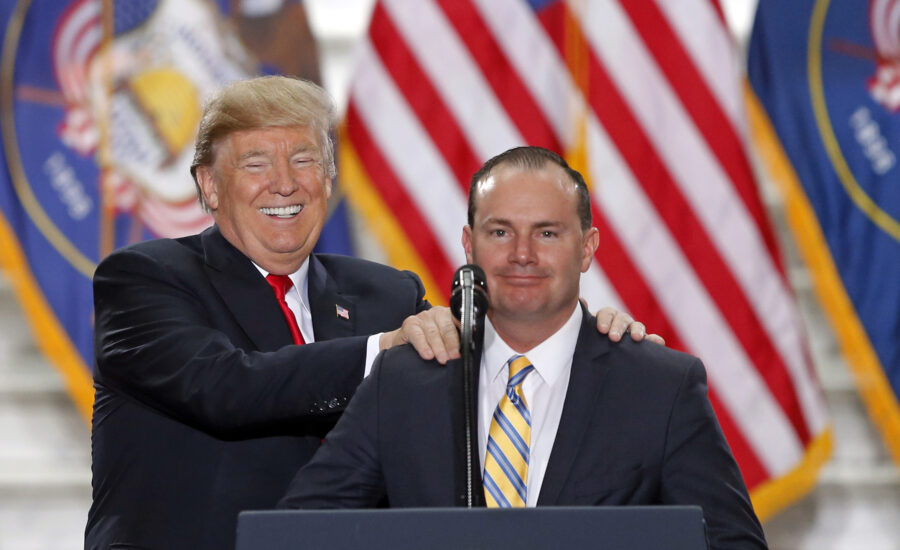 Though he came to enjoy a close relationship with Trump, Lee is not a down-the-line Trump Republican. The Utahn recalled telling Trump at the start of his presidency that if you “fight to protect and restore federalism and separation of powers, you have no greater ally. And so far as you undermine those things, I will be a thorn in your side.”

Since Lee prevailed in 2010 over then-Sen. Bob Bennett (R-Utah) in the state GOP’s complicated nomination process, he’s become one of the most libertarian senators, forming cross-party alliances on topics like military intervention overseas and criminal justice reform. He said in an interview for this story that he’d probably support writing same-sex marriage into law if religious liberty exemptions are added to the bill, a similar view to McMullin.

And McMullin didn’t quite come out of nowhere; the state’s highest-ranking Democratic official said she backed McMullin’s campaign after seeing he was raising money and mounting a credible challenge.

“If they had a really weak launch, I don’t know that former Congressman Ben McAdams and I would have done what we did,” said Salt Lake County Mayor Jenny Wilson, who ran against Romney in 2018 and helped shape the state party’s pro-McMullin strategy.

It’s not clear if Democrats in D.C. will follow the Utah Democratic Party into McMullin’s camp, though. A Democratic Senatorial Campaign Committee aide said the organization is “keeping an eye on the race.”

Rep. Chris Stewart (R-Utah) described Democrats as “angry” McMullin has won over the state party after his past life as a Republican.

“Mike Lee’s going to win,” Cruz said, slamming Democrats for trying to “prop up a candidate like McMullin to confuse and deceive voters.”

The well-funded GOP super PAC Senate Leadership Fund “will be there if [Lee] needs us,” said a spokesperson. But in a sign of how awkward the race is for Utah Republicans, who are split between the politics of Romney and Trump, a spokesperson for Gov. Spencer Cox (R-Utah) said he was “unavailable” for an interview.

“There’s never been a race like this,” said Rep. Blake Moore (R-Utah), who supports Lee.

The DSCC endorsed independent Al Gross in Alaska’s 2020 Senate race, but the races aren’t quite parallels. Lee is more polarizing than Sen. Dan Sullivan (R-Alaska), who ended up beating Gross by 12 points, and Alaska elected a Democratic senator as recently as 2008. Democrat Frank Moss’ Senate win in 1970 was the last time a non-Republican won a Senate race in Utah.

As such, Lee’s campaign against McMullin is simple. Lee handed over a McMullin flier that shows the independent supporting expanded gun background checks, labor unions and “voting rights legislation in Congress.”

Lee argued that McMullin can’t “convince the Democratic Party not to run a candidate and to back you instead — and then campaign on a Democratic agenda, supporting a Democratic president — and pretend to be ideologically neutral.”

In fact, McMullin is open about his more progressive positions. He said he would consider weakening the filibuster, would probably have supported Supreme Court Justice Ketanji Brown Jackson plus bipartisan bills on infrastructure, gun safety and microchips.

McMullin hasn’t given a yes-or-no answer on how he would vote on Democrats’ party-line climate, tax and health care legislation — he said there are parts he likes and parts he does not.

He draws the line at Democrats’ $1.9 trillion coronavirus relief bill. But overall, McMullin thinks campaigning as a future bipartisan gang member is a winner.

Romney “is in the room where it happens,” McMullin said. “I will take that approach.”

McMullin’s apparent role model said he still doesn’t think he will choose sides but accepted that praise: “Anytime anybody thinks I’m a good guy, I’m complimented,” Romney said in an interview. “I’ve worked with Mike a lot and appreciate the work we do together. But both are good friends, and I’m going to stay out.”

Lee responded that though “it’d be great to have” Romney’s backing, “I plan, intend and expect to win with or without it.”

Olivia Beavers contributed to this report.