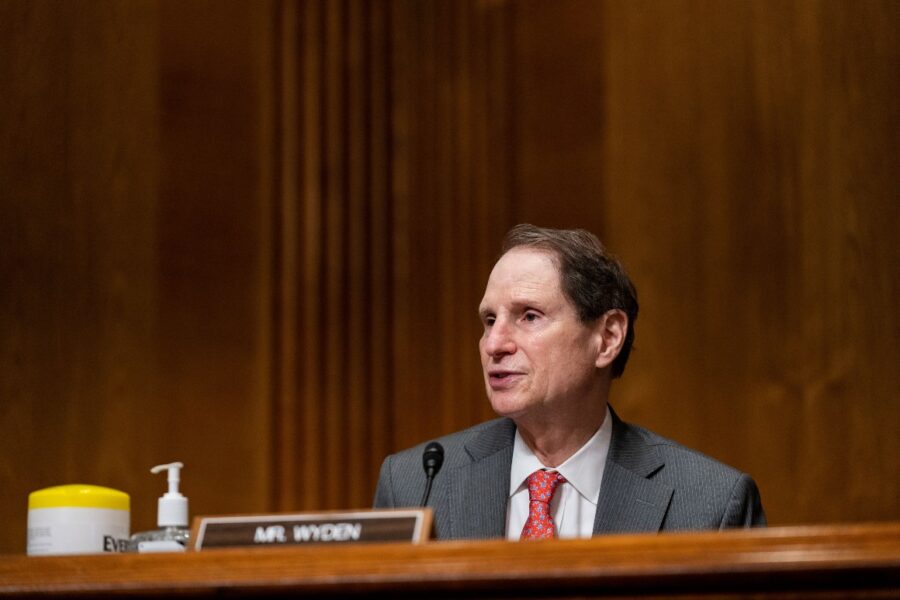 Senate Democrats advanced their signature health care, climate and tax bill on Saturday after the party finished a madcap effort to finalize the bill and lock in all 50 members’ support.

In a 51-50 vote, which required Vice President Kamala Harris to break a tie after the vote was held open for more than two hours, the legislation vaulted the first hurdle to begin debate on the bill. An all-night vote-a-rama still lay ahead for the Senate, with Democratic leaders urging their members to fend off GOP offerings — even ones they may agree with — and keep the tenuously negotiated legislation intact.

“This is one of the most comprehensive and impactful bills Congress has seen in decades,” Schumer said as he kicked off roll call votes on legislation that’s been discussed for well over a year. He called it a “capstone to one of the most productive stretches the Senate has seen in a very long time.”

Senators expect an unlimited amendment “vote-a-rama” to begin later on Saturday evening. That will mark the final episode of the painstaking Senate drama over an effort that Democrats once hoped would be as large as $3.5 trillion but shrank repeatedly after multiple stops and starts. It even looked like a simple health care bill just a two weeks ago, until Sen. Joe Manchin (D-W.Va.) and Schumer revived proposals that also spent big on energy and increased taxes on big corporations.

The GOP will use the amendment marathon to mount a series of politically tricky votes for Democrats in the hopes of amending the party-line package that’s been more than a year in the making, thus creating a divide between House and Senate Democrats. Once the Senate endures that process, its Democrats can finally approve the overall bill, with the House expected to approve the legislation next week.

“We need to keep the deal intact and not let Republicans pick us off. Democrats understand that and that’s what we’re going to do,” said Sen. Elizabeth Warren (D-Mass.). “The only way we’re going to do this is with Democratic votes, we can’t afford to lose anyone and what this means, we are in this boat together.”

Sen. Brian Schatz (D-Hawaii) said he will “vote NO on all amendments, even for stuff I like” and was joined by several other Democrats in that vow. Sen. Bernie Sanders (I-Vt.), however, said he wanted to offer amendments to expand Medicare benefits and the scale of the drug pricing reform, declaring Saturday that “there’s nobody who can deny that this legislation does not address the major crises facing working families.”

Sanders would need 49 other senators and the vice president to vote with him to approve them. Durbin said leaders are trying to “discourage” that.

“I’m going to try to keep this bill clean and get it out of here. It’s too important.” Durbin said.

Despite the positive momentum, Democrats did lose their proposed prescription drug price benefits for the millions of Americans who get health insurance through private-sector employers due to a negative decision from the Senate’s nonpartisan rules arbiter. That was the sole major setback the bill experienced from the Senate’s parliamentarian, who decides which provisions are eligible for sidestepping a GOP filibuster under the chamber’s strict rules. Medicare-related drug price negotiation measures remained intact, as did the guts of the deal.

The core of the bill is advancing: provisions to lower some prescription drug prices; plow more than $300 billion into climate change and clean energy; impose a 15 percent minimum tax on large corporations plus a new 1 percent excise tax on stock buybacks; increase IRS enforcement; and extend Obamacare subsidies through the 2024 election.

Importantly, the fate of one major health care provision that Democrats want in the bill remains uncertain: reducing the price of insulin, a top priority for imperiled incumbent Sen. Raphael Warnock (D-Ga.). Republicans could try to block the insulin proposal by arguing its policy implications for the private market outweigh its budgetary impact.

That could trigger a vote at a 60-vote threshold. The provision is still in the latest version of the bill.

“I need them to not block it,” Warnock said of Republicans. “If they don’t block it, it will pass.”

Aides on both sides of the aisle had sparred over Democrats’ drug pricing plans for weeks. Republicans argued that the savings yielded by the mandate involving the private insurance market, in particular, could be considered a budget side effect rather than the policy’s main purpose, which would break Senate budget rules.

Senate Republicans still criticized the Democratic prescription drug language for setting prices. Minority Leader Mitch McConnell said it “would bring about a world where many fewer new drugs and treatments get invented in the first place as companies cut back on R&D.”

Democrats also preserved another element of the bill’s climate section: a proposed fee on oil and gas companies that exceed a certain level of methane emissions. And at the direction of Sen. Kyrsten Sinema (D-Ariz.), the legislation’s accelerated corporate tax depreciation language was scuttled on Thursday, as was a proposed narrowing for the so-called carried interest loophole that covers some investment income.

She and three other Democratic senators from the west also secured $4 billion in new drought funding in the party-line bill.