OVERLAND PARK, Kan. — Kansas’ overwhelming defeat Tuesday of a ballot measure that would have stripped abortion-rights protections from the state constitution sent shockwaves throughout the country, scrambling calculations about what is possible for red state progressives and which voters are more fired up by the fall of Roe v. Wade.

The surprise 20-point margin in one of the most conservative states in the country highlighted the gap between what a majority of voters want and what a number of Republican candidates and lawmakers are pushing — both in Kansas and in several other states sure to play a key role in the coming midterm elections.

Tuesday’s victory has Democrats hopeful that they can use ballot measures already scheduled for this fall in Michigan and Kentucky and other states to beat back attempts to ban or restrict abortion, and that Democratic candidates can ride the wave of popular anger over the loss of Roe.

“Abortion rights supporters now have an opportunity and an obligation to rebuild pro-choice voting coalitions in states where access has been lost or is at risk,” Rachel Sweet with Kansans for Constitutional Freedom, the group that led the fight against the amendment, told reporters Wednesday morning. “The people of Kansas spoke and now the rest of the country has to listen.”

For anti-abortion advocates jubilant since the Supreme Court overturned Roe in June, the Kansas vote was a crushing blow, but they insist it won’t change their strategy.

It’s a long game and there are more tools in the toolbox besides ballot measures, stressed Kristi Hamrick with Students for Life of America — one of several national groups that ran ads and sent volunteers to canvas for the Kansas amendment.

“It took us 50 years to address Roe. I think we have the time and the people on our side to keep the fight going,” she said.

Among the more striking results from the 59 to 41 win for the “no” campaign was that the anti-abortion groups underperformed in even the reddest parts of the state, such as the rural counties along the Colorado border, giving progressives an injection of hope that their message can resonate beyond cities and suburbs this fall.

“The enthusiasm gap — which normally favors the party out of power — is now closing, and there was no greater example of that than in Kansas yesterday,” Patrick Gaspard, the CEO of the Democratic Party-aligned Center for American Progress Action Fund, told reporters Wednesday. “This could be a signal for what’s to come.”

The Kansas victory is also emboldening progressive organizations like the Fairness Project, a national group that advocates for ballot measures as a strategy for getting around GOP state legislatures and governors on everything from Medicaid expansion to transgender rights and abortion.

“Ballot initiatives are a phenomenally powerful tool when there’s a disconnect between the popularity of an issue and what’s being enacted by politicians. And every poll in the country shows that disconnect when it comes to abortion rights,” said Fairness Project Executive Director Kelly Hall. “This is really the next frontier, and already advocates are starting to think about the pathways for 2023 and 2024.”

While fewer than half the states allow citizens to gather signatures to put a constitutional amendment on the ballot, Hall said many of those that do are “right on the front lines of the battle for reproductive freedom,” including Arizona, Idaho, Missouri, Nebraska, North Dakota, Oklahoma and South Dakota.

On Wednesday, while the dust was settling from the Kansas vote, progressives were already urging members of like-minded Facebook groups to help collect signatures to put an abortion rights amendment before Missouri voters in 2023.

“Some of these places you may think are so deeply red that no measure to protect abortion could ever succeed,” she said. “But don’t write off these states. No matter where you live, there is hope on the horizon.”

The Kansas contest, the first to put abortion-rights directly to voters since Roe was overturned, always had the potential to shape the national conversation, and both sides poured millions of dollars into TV, radio, mail and digital ads. Hundreds of staffers and volunteers flew in from across the country to knock on hundreds of thousands of doors. Celebrities and musicians with ties to the state released videos urging their fans to get to the polls.

But it was the abortion-rights messaging, which framed the debate around individual rights in language familiar to conservatives that resonated with voters and helped assure the amendment would fail, said Neal Allen, an associate professor of political science at Wichita State University.

“The ‘no’ campaign’s rhetoric about government overreach and intrusion into personal lives was very successful,” he told POLITICO. “Meanwhile, a big failure of the ‘yes’ side is that they weren’t able to look credible to the electorate when they said that the amendment wouldn’t lead to a ban on abortion. If you read the amendment, it wasn’t clear what it would actually do. But we had several examples of anti-abortion activists and legislators talking publicly about wanting a total ban. And that really hurt their side.”

The results were more striking still because the anti-abortion side, which began plotting the ballot initiative in 2019, had several advantages. Not only did GOP lawmakers choose the wording of the amendment, they scheduled the vote for the August primary election, when turnout is usually lower than during the general election. They also knew there were no competitive Democratic primaries, and that unaffiliated voters — who outnumber Democrats in the state — can’t vote for candidates in primaries and may not have known they could participate Tuesday.

Yet that move backfired, argued Allen.

“The conservative Republicans in the state legislature really missed an opportunity when they said this had to be in the primary this year and not the general election back in 2020,” he said. “2020 was a pretty good year for Republicans here. Roe v. Wade would have still been in place, and voters wouldn’t have the example of other states with total abortion bans.”

Defying expectations, voter turnout surged on Tuesday — nearing the level of the presidential general election in some areas. 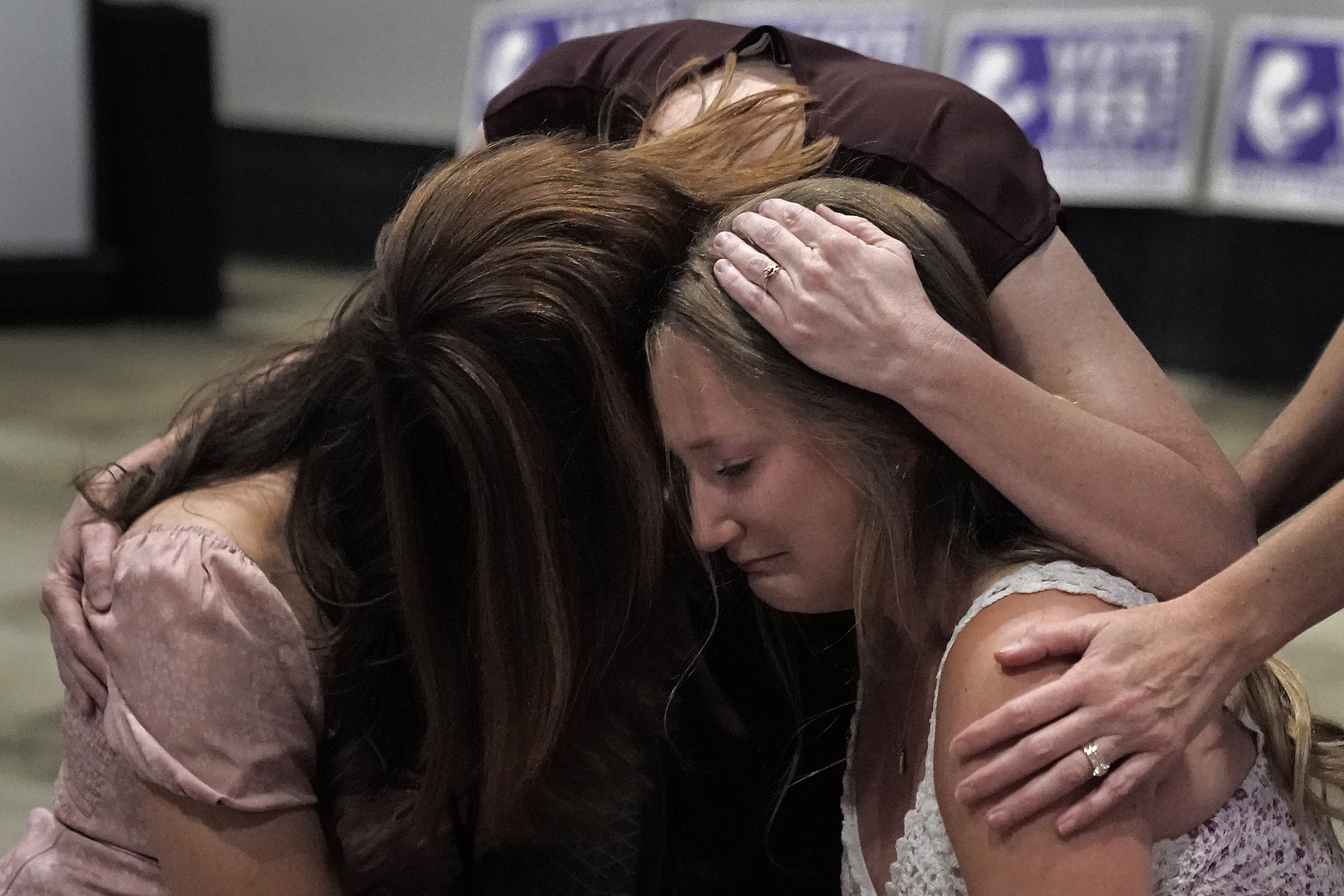 Conservative groups that had spent the last several months in Kansas calling for the question of abortion to be handed to voters lamented the results, blaming “lies that ultimately drowned out the truth,” and pledged to redouble their efforts in the Sunflower State and around the country.

For some, that means turning to courts, and focusing on narrower issues such as the laws around access to abortion pills.

“We have to prioritize, and I think we’re going to prioritize lawsuits related to chemical abortion,” Hamrick said. “That’s a very effective place for lawsuits for us, especially knowing that it’s the future of abortion. Everyone will have to pick and choose and that’s one we will definitely pick.”

Anti-abortion-rights groups are also investing tens of millions in congressional races in hopes of flipping the House and Senate and passing national abortion restrictions, even as they continue campaigning at the state and local level.

Mike Kuckelman, chair of the Kansas GOP, insisted that despite the referendum results, abortion will not be decisive in November and that Republicans still have a good chance at ousting Democratic incumbents like Gov. Laura Kelly.

“I don’t see the average person going to a polling place with abortion on their mind and saying, ‘I need to vote for this person or against that person because of the abortion issue,’” he said. “I think people are going to their polling place and thinking about how they’re not very happy with the state of our economy.”

But anti-abortion advocates, such as Mallory Carroll with SBA Pro-Life America, are pushing state and federal lawmakers not to run away from abortion as a campaign issue.

“The lesson that pro-life candidates need to take away from this is that you must drive the contrast and go on offense,” she said. “Republicans can’t just rely on running on gas prices, inflation and economic issues, even though they’re very salient issues, because that gives the pro-abortion Democrats the space to define our pro-life candidates on this issue, and that’s what cannot happen.”