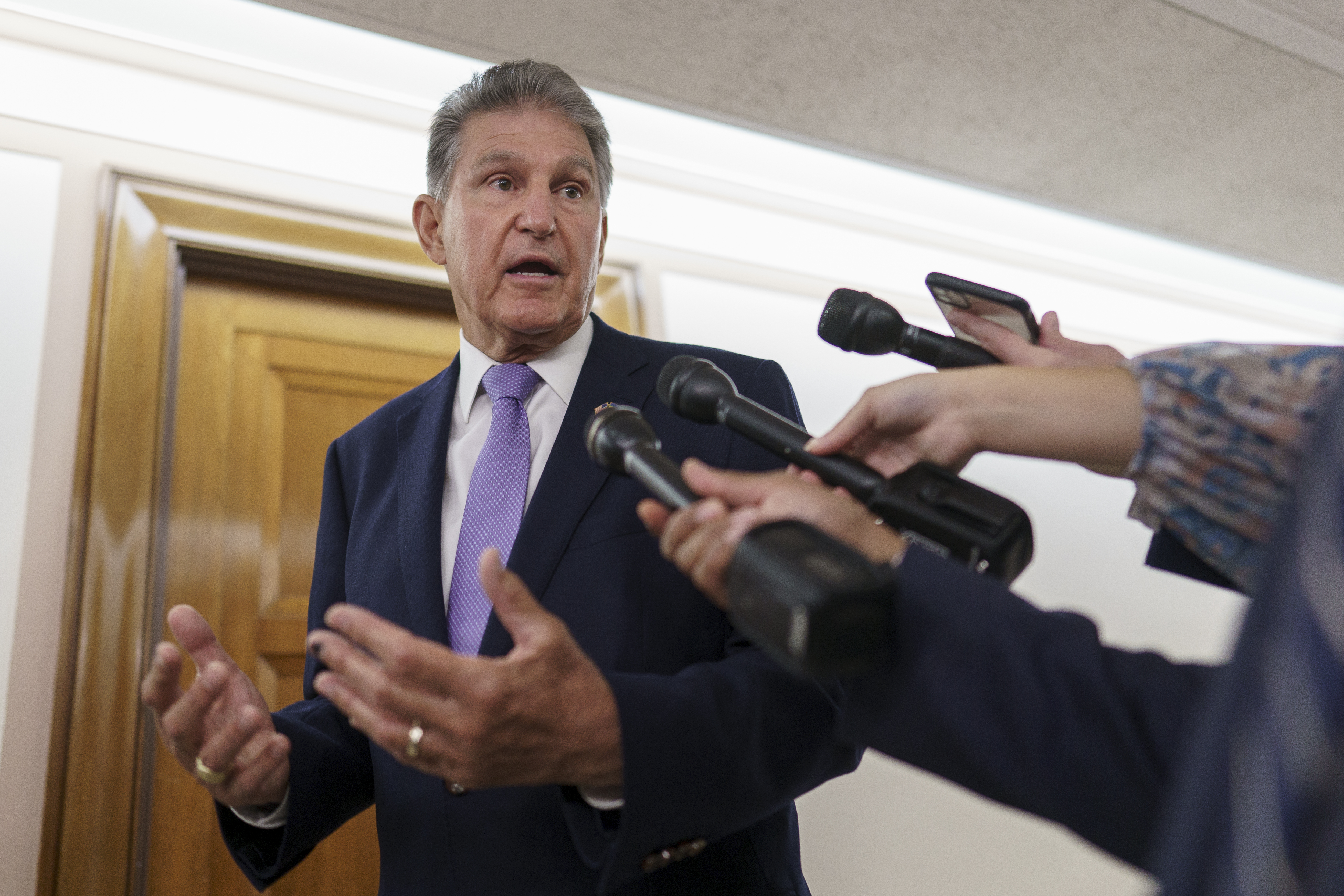 Attention Kyrsten Sinema: The deal between Chuck Schumer and Joe Manchin reflects your “tremendous input,” doesn’t raise taxes and is altogether an “all-American bill.” That’s, at least, according to Manchin.

As Sinema (D-Ariz.) weighs whether to support the party-line energy, tax, deficit reduction and health care legislation, the West Virginia senator fanned out across all five Sunday shows to make the case for his deal. The moment reflected how intensely Manchin is now pressing to pass a package that only a few weeks ago he was lukewarm on, at best — and why he thinks Sinema should support it.

And Manchin had plenty of work to do during his quintet of appearances, with hosts pressing him whether the bill really fights inflation and how imposing a new minimum tax on large corporations might affect the economy. Faced with those questions, Manchin said simply on “Fox News Sunday”: “We did not raise taxes. We closed loopholes.”

He also made sure to credit Sinema with cajoling Democrats into that tax-skeptic position after many in her party weighed surtaxes on high earners and pushed for rate increases. Though Sinema’s stayed quiet since Manchin and Schumer announced the deal on Wednesday, Manchin said that he “would like to think she’d be favorable to it.”

“Kyrsten Sinema is a friend of mine, and we work very close together. She has a tremendous, tremendous input in this legislation,” Manchin said on NBC’s “Meet the Press.” “She basically insisted [on] no tax increases, [we’ve] done that. And she was very, very adamant about that, I agree with her. She was also very instrumental” on prescription drug reform.

Manchin and Sinema were aligned for months last year on pushing back against Democrats’ plans to spend as much as $3.5 trillion. Sinema worked on the prescription drug piece and helped shape the revenue package significantly late last year before Manchin rejected what was once called Build Back Better.

Now they are in different places. Manchin negotiated the deal one-on-one with Majority Leader Schumer while Sinema was caught completely off guard by its announcement, particularly the inclusion of a provision narrowing the so-called carried interest loophole, which brings in $14 billion of the bill’s $739 billion in new revenues.

Manchin said he didn’t brief Sinema or anyone else in the Democratic Caucus on his negotiations because of the very real possibility they would fall apart. He said on CNN that when Sinema “looks at the bill and sees the whole spectrum of what we’re doing and all of the energy we’re bringing in, all of the reduction of prices and fighting inflation by bringing prices down, by having more energy, hopefully, she will be positive about it.”

Sinema had no new public comments on Sunday as she studies the bill and waits for the Senate parliamentarian to rule on whether it meets the conditions to evade a GOP filibuster. Sinema’s always been cooler on changing the tax code than Manchin, citing concerns over changing tax policies that might restrict economic growth or competitiveness.

A Joint Committee on Taxation summary found that the bill would slightly increase tax rates on some people earning under $400,000, leading Sen. Mike Crapo (R-Idaho) to say that the legislation “will do nothing to bring the economy out of stagnation and recession, but it will raise billions of dollars in taxes on Americans making less than $400,000.”

But Ashley Schapitl, a spokesperson for Senate Finance Chair Ron Wyden (D-Ore.) said those families “will not pay one penny in additional taxes under this bill” and said the JCT analysis is not complete because “it doesn’t include the benefits to middle-class families of making health insurance premiums and prescription drugs more affordable. The same goes for clean energy incentives for families.”

Manchin put it even more plainly on “Meet the Press.”

The West Virginia Democrat also answered several questions about the second part of a deal: an agreement with Biden, Schumer and Speaker Nancy Pelosi to increase energy production by implementing federal permitting reform. That piece was excluded from the party-line bill because it is likely to run afoul of the strict budget rules on reconciliation bills.

Asked how he can be so sure that will pass later, Manchin offered a warning on Fox News if it doesn’t happen: “There will be consequences.”

Manchin’s urgent push comes ahead of a critical week for the Democratic Party. With Covid infections still infiltrating their 50-seat majority, Democrats are trying to stick a tricky landing ahead of the August recess. Democrats probably need all their members in town to pass the Manchin deal and still need to get the legislation cleared by the Senate parliamentarian.

On the attendance side, Sen. Patrick Leahy (D-Vt.) announced he would be available for votes this week, a critical boost for Democrats. Provided all Democrats show up this week, they can pass the Manchin-Schumer legislation with Vice President Kamala Harris’s tiebreaking vote, though first they’ll have to all stick together during an unlimited “vote-a-rama” to keep Republicans from gutting the carefully negotiated bill.