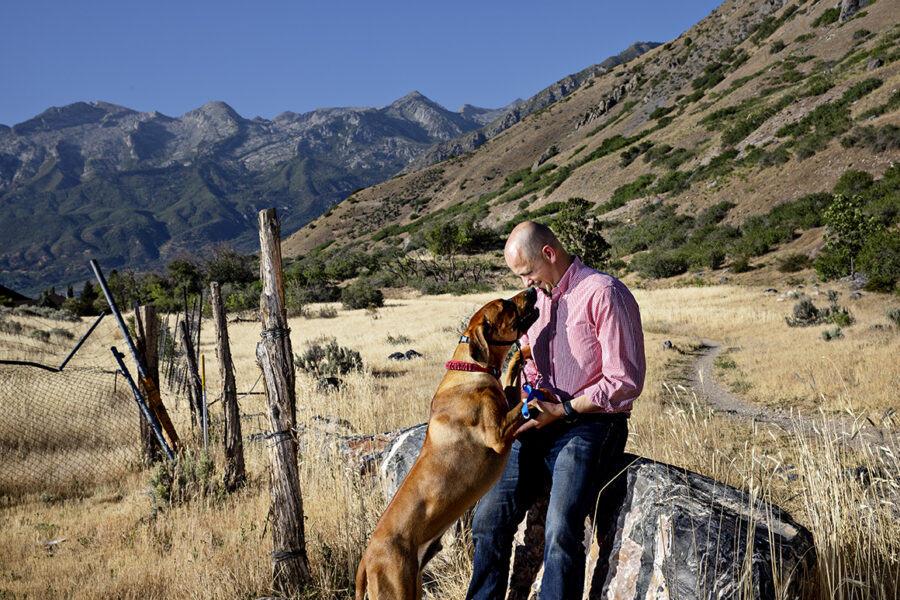 It’s a Tuesday evening, and Evan McMullin is out for his nightly ritual: a walk around his neighborhood with his dog, Moose, a stout Rhodesian Ridgeback. We’re 20 paces from the house when McMullin freezes. “I did not bring poop bags,” he says, and darts back to the rear patio.

McMullin first burst onto the national scene in 2016 by running as a protest presidential candidate against Donald Trump and taking more than 20 percent of the vote in his home state of Utah. He’s spent the intervening years working as a conservative anti-Trump advocate, but he’s back on the ballot this fall. He’s running to replace Utah Republican Sen. Mike Lee in another independent campaign — but this time with a serious chance to win, not just play gadfly.

McMullin comes bounding out the back door, bags in hand, and we’re off to discuss the heady topics of the day: the weather, his newly expanded family (he became a husband and stepfather to five last summer) and a grand experiment to defeat Trumpism and its acolytes.

McMullin’s candidacy represents the perfect trial balloon for the kind of cross-partisan effort that, in theory, could come together to beat far-right Republicans in red states. It requires Democrats in a mood to compromise, independents and disgruntled, Trump-skeptical Republicans. Utah has all three.

Utah Democrats — who’ve had little-to-no success in statewide races over the past 40 years — badly want Lee out, and they see the independent McMullin as the only viable option. So, at a raucous state convention in April, a majority of delegates voted to hold their noses and formally back McMullin instead of a veteran Democrat. 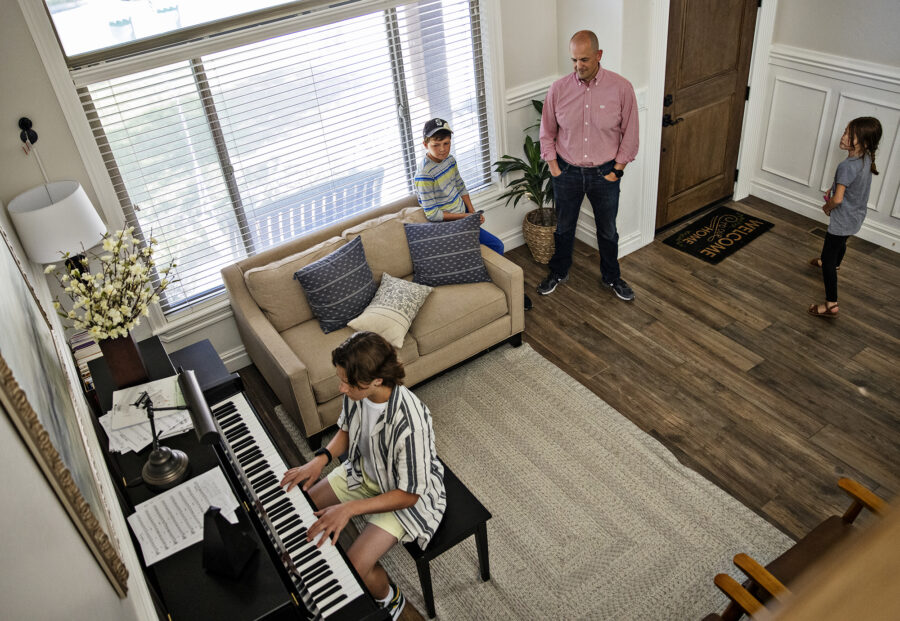 And while Utah is also deeply conservative, it has some unorthodox tendencies. Most Utahns, McMullin included, are members of The Church of Jesus Christ of Latter-day Saints, a group that has shown an unusual aversion to Trump (hence McMullin’s success in 2016). As an ex-Republican, McMullin offers himself as a principled alternative to Lee, whom he views as a far-right extremist tied to a former president who tried to overthrow the government.

“The only way to replace [Lee] is to build a coalition,” McMullin says. “We’re still bringing people together.”

If his motley lot can swing the election, McMullin figures, perhaps it could serve as a template for other races around the country to take on the far right or the far left.

So far, his backers run the gamut. They include national figures from both parties, like former DNC Chair Howard Dean and former RNC Chair Michael Steele. More important, he’s pocketed prominent local endorsements, including Jenny Wilson, the mayor of Salt Lake County and the state’s highest-ranking Democrat. Ben McAdams, a former Democratic congressman, who thought about running against Lee but saw it as an unwinnable race for his party, is serving as McMullin’s liaison to Utah Democrats.

An eyebrow-raising non-endorsement comes from Utah GOP Sen. Mitt Romney, who views both McMullin and Lee as “friends” and so will stay out of the race. Still, it’s rare for a senator not to endorse a home-state colleague from the same party, and McMullin counts the neutrality as a win. “I respect that and appreciate it very much,” he quips.

If McMullin sees his campaign as a tale of strange bedfellows, he doesn’t let on. To him, it’s a democratic do-or-die moment. Lee has betrayed Utah voters, he says. “Mike Lee’s politics lead to nothing,” he says. “What have they led to for Utah — an embarrassment every other week?”

McMullin’s laundry list of his opponent’s betrayals is long: Lee went from Trump critic to loyalist; Lee is more of an obstructionist than a legislator; Lee advised efforts to overturn the 2020 election. It’s the last point that gets McMullin animated. “We now know, despite his lies to the contrary, that Sen. Lee was very involved in the plot to identify fake electors from swing states to overturn our democracy,” McMullin says, referring to a series of texts between Lee and former White House chief of staff Mark Meadows which the Jan. 6 committee released earlier this year. The texts appear to contradict Lee’s previous statements about his opposition to Trump’s effort to overturn the 2020 election, though Lee’s office rejects that characterization. 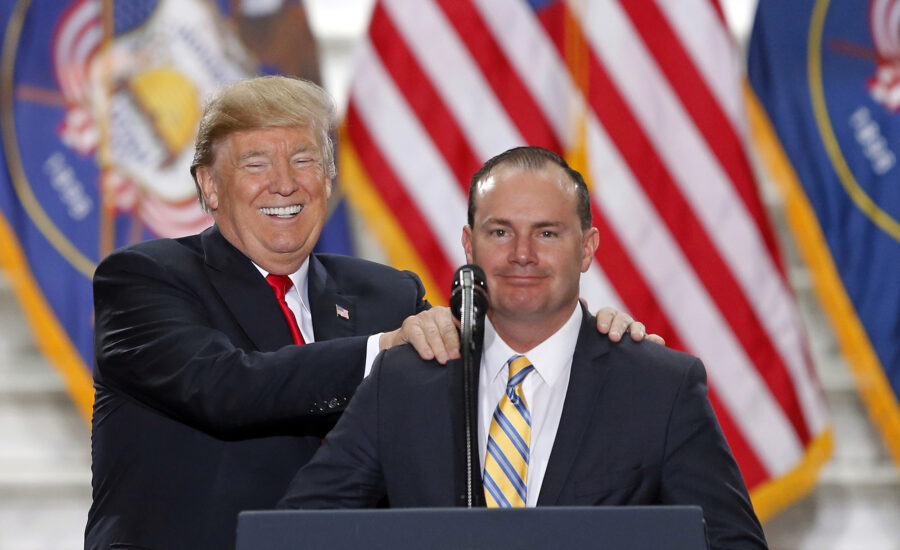 Even before Lee faced McMullin, he had to overcome a primary challenge against two capable Republicans. The day after the primary, McMullin tweeted that Lee “barely hobbled over the finish line,” though in fact, Lee won with ease, garnering over 60 percent of the vote. “It’s all relative,” McMullin says, denying that his statement was hyperbolic. “In some states, that might be an impressive result for a Republican. In Utah, it’s not.” Lee’s two Republican challengers told me they’re still undecided whether they will stand by the party or endorse McMullin.

So McMullin is toeing a narrow line. He talks of the Democrats, independents and disaffected Republicans in his corner, and speaks optimistically about his polling. A recent Deseret News poll showed him trailing Lee by a mere 5 points, though Lee’s campaign disputes this figure.

“Like the polls published by the media during the Republican primary, these polling numbers continue to significantly vary from our internal polling that shows Sen. Lee much further ahead,” says campaign spokesperson Matt Lusty. “Evan McMullin is trying to be all things to all people.”

As we walk with Moose — and before any poop bags are needed — we turn a corner, and there sits a neighbor outside his home, a registered Democrat who feels no need to hold his nose. “I will do anything in my power to get rid of Mike Lee,” says Gary Gardner when I ask whether he’ll vote for his neighbor. 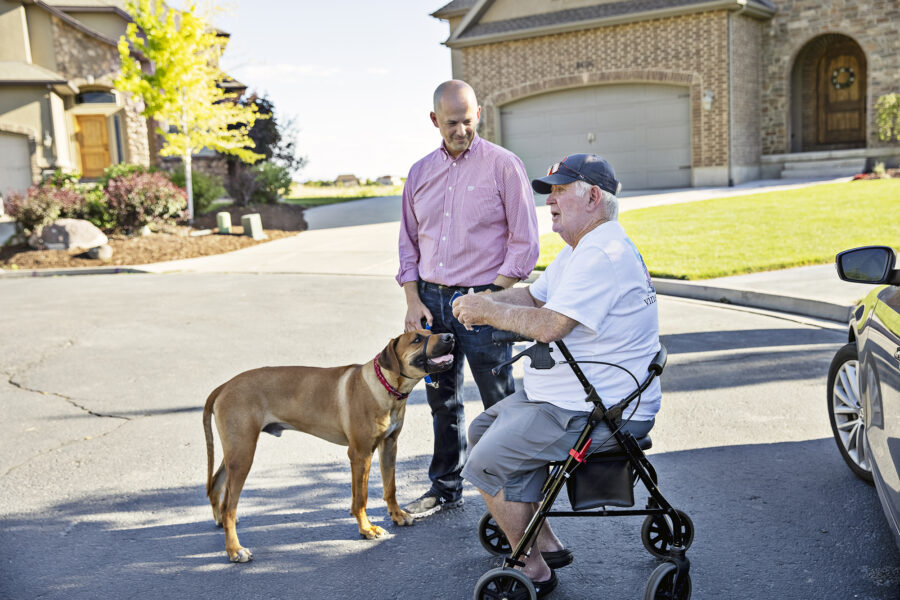 Not all Utah Democrats are as committed. At the state party’s convention earlier this year, supporters of Democratic candidate Kael Weston repeatedly sought to block the motion to back McMullin. It ended up passing with 57 percent of the vote.

“He’s gotten roped into the party,” says Weston. “They say, ‘Evan has the Democratic nomination, he’s a Democrat.’ Well, you look at him on policy. He’s not a Democrat.” Weston has not yet made an endorsement, citing a desire to “not get ahead of the voters,” though he remains open. McMullin says he reached out to Weston prior to the convention about setting up a meeting and “would still love” to do so.

It’s not just Democrats he has to win over. Many hard-line conservatives are likely to have qualms with McMullin, who’s more recognizable as a Never-Trump presidential candidate than as the one-time chief policy director for House Republicans. McMullin flirted with forming a new party last year as an alternative to the GOP; now he views his staunch independence as a strength, noting that the Constitution guarantees committee assignments for all senators, regardless of party affiliation.

I ask who would make that assignment, as it’s usually the party bosses. “Well, we will see,” he says, then quickly shifts focus. “But I will say this — that I’m going to maintain my independence because that is my commitment to this coalition.”

Coalition, cadre, alliance — call it what you will, but it’s a bet that he, and perhaps others, can recruit enough people to cross party lines even in a deeply polarized age. “Wherever we have extremist incumbents who poorly represent a majority of a state, then this kind of coalition is the answer,” he says. “It’s the way to hold them accountable and protect our country.”