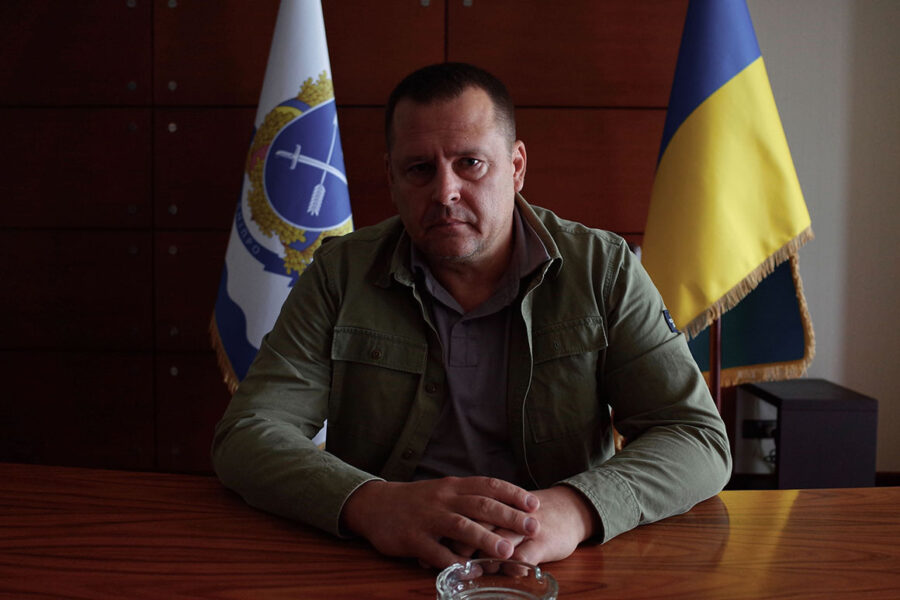 DNIPRO, Ukraine — Just about everything these days passes through this south-central city: Western arms being rushed to the front, reinforcements from Kyiv to shore up Ukraine forces and humanitarian aid for desperate civilians.

And one of the key officials making sure it all runs smoothly is Dnipro Mayor Borys Filatov — a tough-talking, chain-smoking, brawny man with a flair for the dramatic and hunger for adventure. (He’s the proud owner of a $200,000 ticket to ride on one of Virgin Galactic’s suborbital space flights.)

Filatov may have Russian blood and speak Russian as his first language, but the 50-year-old former lawyer and entrepreneur who looks over a city that has long had close ties to Moscow insists he’s as Ukrainian as anyone and doing his part to quash Vladimir Putin’s imperialist agenda.

“Everything goes through us,” he told POLITICO in an interview Wednesday inside the heavily guarded riverfront office of his old law practice as air raid sirens wailed across the city.

The sirens indicate that a Russian missile has entered Ukrainian airspace, warning the city’s million residents to take cover. Dnipro is far enough back from the frontlines that it has so far avoided attacks from Russian ground forces and the artillery systems that have devastated areas around the capital, Kyiv, and major cities Kharkiv, Chernihiv and Mykolaiv.

But Russian long-range missiles have pounded Dnipro, which serves as the main gateway to the embattled east, since the first moments of Putin’s Feb. 24 invasion.

Filatov believes it’s the increasingly critical role that Dnipro plays in Ukraine’s defense, as well as the fact that the city is composed of “big industrial factories and highly intelligent people, that is, a large number of responsible and patriotic citizens,” that has made it “a very serious interest of Putin’s.”

Underscoring that point, Filatov said that “10 percent of all Russian missiles have been fired directly at the territory of Dnipropetrovsk region,” of which Dnipro is the capital. 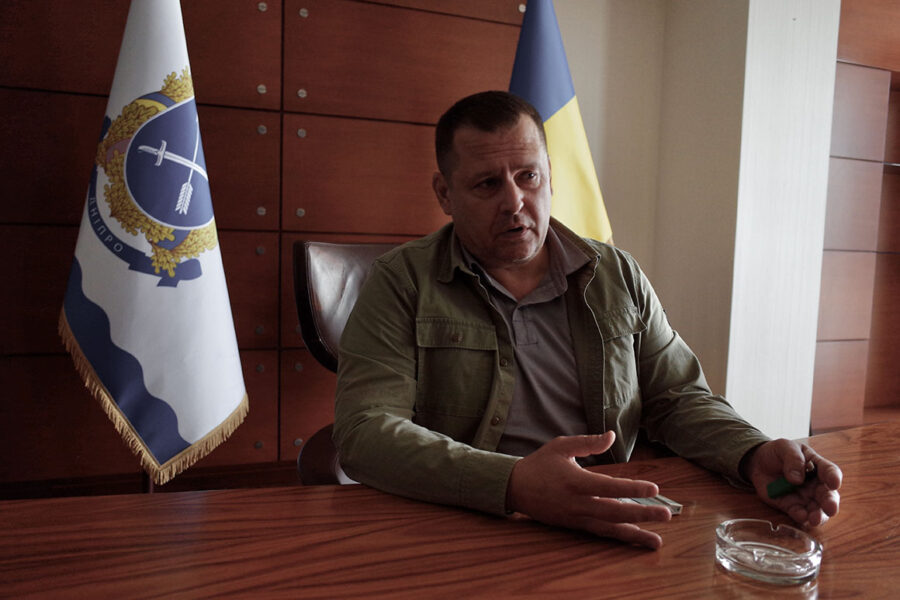 He declined to disclose the exact number of missiles, citing military secrecy. But President Volodymyr Zelenskyy said this month that Russia had fired more than 3,000 of them at Ukraine since the invasion began.

That figure and attacks on Dnipro and Dnipropetrovsk since then mean more than 300 missiles have been lobbed here. Of those, Filatov said, 90 percent have struck private property and civilian infrastructure that largely has nothing to do with the Ukrainian military or Western weapons transfers.

As proof, he cited Russian attacks that destroyed an empty fuel container and a car service station.

“I don’t understand why they fire several $1 million missiles at a regular old car service station. But apparently, Russian propaganda said that cars were repaired there for the Azov battalion” — a volunteer fighting unit that was formed in 2014 by far-right nationalists before it was brought into the National Guard and this year defended Mariupol’s Azovstal plant to the bitter end. “This is simply ridiculous.”

“I didn’t know whether their intelligence gathering is not working correctly or if this is some kind of general stupidity,” he added.

But he’s come to a conclusion: “This is simply terror. This is intimidation, the demoralization of the population so that they put pressure on the government.”

Indeed, the targets of Russia’s missile attacks over the past month have included shopping malls, entertainment centers and residential buildings, and they have killed scores of civilians, including women and children.

A Russian missile attack in Dnipro last week struck part of the Yuzhmash Machine Building Plant and Yuzhnoye Design Bureau campus, and the public square in front of it, killing two civilians and wounding many more, Filatov said.

Yuzhmash and Yuzhnoye — which were central to the manufacturing of the Soviets’ intercontinental ballistic missiles and have served Ukraine’s defense and space interests since independence in 1991 — appear to have been the target. But like many of Russia’s strikes, these ones missed.

Seated beside the blue-and-yellow Ukrainian flag and the Dnipro city flag, decorated with a Cossack saber and arrow, Filatov recounted how he experienced the first moments of the invasion and put Dnipro on a war footing.

He was at his summer house on Feb. 23 when he got a call from military intelligence officials warning him that Russia would invade in the early hours of the 24th.

“They said it looks like the Russians will come for us,” he said, adding that the officials had intercepted radio transmissions of Russian forces discussing their orders that had just come down.

It caught him off guard because Zelenskyy had for weeks, he said, been downplaying the threat of an invasion.

“Unfortunately, the government, despite the warnings of our Western partners and President [Joe] Biden personally, reassured everyone,” he said. “We were told that we would be frying kebabs in May.”

Filatov said he had taken the warnings seriously and because of the 2014 seizure of Crimea had set preparations for the invasion in motion before Feb. 24.

“We sent clear instructions to critical infrastructure facilities … and I gathered my specialists and said that if the internet or telephone communication is cut off, how will we meet?” he said. He also organized a quick-reaction volunteer force with nationalist militia leader Dmitry Yarosh to gather at the mayor’s office “in the event of hostilities.”

Around the same time, he read a post by a Ukrainian journalist in Kyiv that said explosions had been heard in the capital.

“Three minutes later,” he said, “I heard explosions to my left — at a military installation — and to my right — at the Dnipro airport.”

The city had been hit with at least four missiles.

“I could see the glow of the fires burning from attacks,” Filatov said. “I grabbed my things and went to work.”

That included coordinating with Dnipropetrovsk regional authorities to erect checkpoints around the region and especially Dnipro city, mobilize the Territorial Defense Forces, which are headed by his longtime ally, the business leader and politician Hennadiy Korban, and dig trenches around the city’s fringes.

Eventually, when Russia’s blitzkrieg on Kyiv failed and Putin ordered troops to refocus and consolidate efforts on the eastern Donbas region, the main tasks would be to ensure the smooth passage of critical supplies to Ukrainian forces there and to shore up Dnipro’s defenses.

Filatov declined to give specifics about Western weapons that may be flowing through the region, which is about the size of Maryland. But he acknowledged that his city and the greater province have been crucial for ensuring they get to the front.

“We are dealing entirely with defense issues,” Filatov said. “We buy drones, pickup trucks, uniforms, canned meat, walkie-talkies, everything the soldiers need. We are looking all around the world for these things. It’s a logistics system and a fortification system.”

He has secured support from American cities, he said, including Chicago and Philadelphia. And he’s forging partnerships with Osaka and Cologne. Together, these cities and others have provided or promised around 30 ambulances and other crucial equipment and necessities.

It shouldn’t come as a surprise that Filatov, who moves around town in an armored SUV with a horde of unsmiling bodyguards, was quick to build such an effective defense and logistical network.

In 2014, Filatov served as deputy governor of Dnipropetrovsk province under his former business partner Ihor Kolomoisky, who was tapped as part of an experiment to appoint influential oligarchs to the Ukrainian regions at risk of Russia-led separatist insurgencies in 2014. Filatov’s job was to quash any pro-Russian separatist sentiment and groups. As part of that, he and Kolomoisky personally bankrolled several volunteer battalions and offered up rewards for weapons and Russian and pro-Russian agents captured. The bounties included $1,000 for machine guns, $1,500 for heavy machine guns, $2,000 for grenade launchers and $10,000 for Russian agents.

Russian forces never captured territory in Dnipropetrovsk, partly due to those efforts but also because of Ukrainian volunteer fighters’ determination.

Filatov has since fallen out with Kolomoisky, who owns the 1+1 television channel that aired Zelenskyy’s hit comedy series “Servant of the People,” which catapulted him to fame. Last week, Zelenskyy reportedly revoked the Ukrainian passport of Kolomoiskiy, who also holds Cypriot and Israeli citizenship.

Filatov isn’t so bothered with that, but he’s angry with Zelenskyy for also reportedly stripping Korban, the Dnipropetrovsk province’s head of the Territorial Defense Forces, of his Ukrainian citizenship.

Korban posted on Facebook this week that border guards banned him from re-entering Ukraine after a trip abroad.

“I hope that this is still just a tragic mistake. I really would not want the central government, taking advantage of the fact that we have a war in our country to start, let’s say, creating an autocracy,” Filatov said in a rare wartime moment of criticism of Zelenskyy, who has won the hearts and minds of millions across the world.

Politicians in Ukraine have unofficially agreed to rally around the flag and set aside differences and grievances to fight as one against Russia.

“War does not give the right to usurp power,” Filatov said. “We do not need a new Putin.”