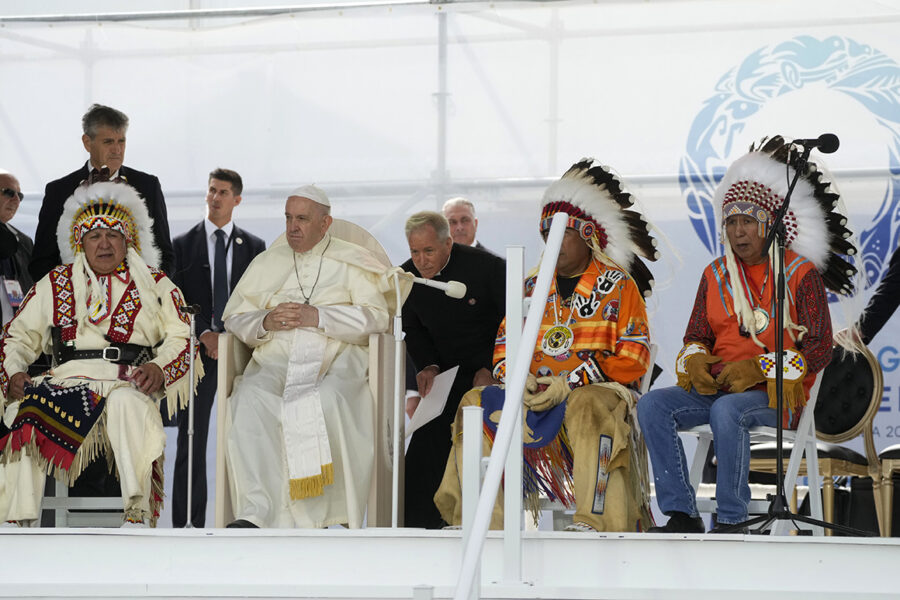 EDMONTON, Alberta — Speaking to thousands of Indigenous peoples Monday afternoon, Pope Francis apologized for the rampant abuse of Indigenous children by Christian missionaries in state-funded residential schools across Canada that lasted for more than a century.

In a wide-ranging speech outside Edmonton, the pope pleaded for forgiveness from the community, reaffirmed his empathy for survivors and descendants, and promised an investigation into the misconduct.

“I humbly beg forgiveness for the evil committed by so many Christians against the Indigenous peoples,” Francis, sitting in a white chair with two Indigenous chiefs on either side, said to the crowd. “In the face of this deplorable evil, the Church kneels before God and implores his forgiveness for the sins of her children.”

With each explicit apology, the crowd — filled with legions of survivors, elders, chiefs and leaders — erupted in applause.

Francis’ apology commences a week-long “penitential pilgrimage” across the country to atone for the conduct of Christian missionaries, who, along with the Canadian government, forcibly removed at least 150,000 Indigenous children from their homes and banned their languages as well as religious and cultural practices — forcing assimilation into the country’s Christian society.

The historic address, held near the site of a former residential school in Maskwacis, exemplifies the Church’s efforts to reconcile with Indigenous communities and address the generational trauma incurred by descendants of victims. Abuse at the schools, which were established by the Canadian government, dates back to the 1880s and continued until the 1990s.

For years, Canadian activists have called on the Vatican to address the horrific systemic abuse that reverberates through Indigenous communities today. But it wasn’t until the discovery last year of a cemetery in British Columbia, thought to contain the remains of more than 200 children from a former residential school, that the Church began to consider action. Another cemetery containing more than 750 remains tied to a residential school was found shortly after in Ontario, and hundreds of unmarked graves across the country are also believed to be connected to residential schools.

While Francis’ visit signals the Church’s commitment to reconciliation, Indigenous activists have expressed that they want more than words.

Fourteen years ago, the Canadian government formally apologized for instituting the schools and has since provided billions in reparations to Indigenous communities and survivors. However, activists are also pressing for access to Church archives to learn about children who did not survive, the return of Indigenous artifacts in the Vatican’s museums and justice for survivors.

“Many of you and your representatives have stated that begging pardon is not the end of the matter. I fully agree. That is only the first step,” Francis said, though he did not announce further details. Francis also did not address the issue of accessibility to archives or artifacts.

A comprehensive investigation into the abuse has already been completed. Treatment of Indigenous children at the schools was characterized as a “cultural genocide” by a report from Canada’s Truth and Reconciliation Commission in 2015. Over the century-long period of systemic abuse, at least 3,200 students died at the schools. The actual number is estimated to be much higher.

Willie Littlechild, a Cree chief and lawyer who introduced the pope on Monday, worked on the commission that published the report and interviewed more than 7,000 survivors of the abusive school system. A survivor himself, Littlechild expressed a deep appreciation for Francis’ visit.

“It was clear to us all that you listened deeply and with great compassion,” Littlechild said, referencing an April visit to the Vatican where he and other survivors spoke with the pope. “The words you spoke to us in response clearly came from the depths of your heart, and for those who heard them, a source of great comfort and deep encouragement.”

During the visit, Francis surprised many of the survivors when he said he felt “sorrow and shame” for the cruelty of the missionaries. In turn, the survivors gave the pope a pair of children’s moccasins to remember the suffering of Indigenous children. He was instructed that they could only be returned upon a trip to Canada.

“The memory of those children is indeed painful. It urges us to work to ensure that every child is treated with love, honor, and respect,” Francis said. “At the same time, those moccasins also speak to us of a path to follow, a journey that we desire to make together, we want to walk together, to pray together, and to work together, so that these sufferings of the past can lead to a future of justice, healing, and reconciliation.”

Blake Desjarlais, a New Democratic Party MP who hails from the Fishing Lake Métis Settlement in Alberta and now represents an Edmonton riding, was in the audience for the apology. Desjarlais’ father and grandmother attended residential schools, and two of his uncles died in Catholic custody.

“It was all very surreal, almost like a dream,” Desjarlais told POLITICO when he returned to Edmonton. “You never anticipated this, in the sense that a powerful, large institution like the Roman Catholic Church would see any interest or benefit in apologizing for its atrocities here in North America. On Turtle Island.”

“I can only attribute that to the tenacity of survivors throughout this experience, and that puts in perspective for Canadians how deep this wound is.”

Audrey Poitras, the president of the Métis Nation of Alberta who visited the pope in April, told journalists gathered after the speech that there’s no single way for survivors and their descendants to react to Monday’s apology.

“There are probably many different feelings out there,” she said. “Everyone needs to have their own time to deal with situations like this.”

As part of his apology, the pope promised concrete help in the healing process for survivors and families. Poitras hoped that process could include the construction of monuments to the loss of thousands of Indigenous children. She also implored the church to release reams of records that would help families learn where children were sent, and where their remains might rest today.

Prior to speaking, Francis, flanked by dozens in his security detail, paused to pray at Ermineskin Cemetery near the site of the Ermineskin Indian Residential School, which likely includes remains from former students and community members. Hundreds of white wooden crosses, which denoted the dates of the deceased, were adorned with jewelry and feathers. A child’s moccasin, with a blue, yellow and brown pattern, was hung around the neck of a cross.