INDIANAPOLIS — The messiness of American politics post-Roe v. Wade erupted at the Indiana Statehouse on Monday as thousands of abortion rights protesters swarmed into the building and chanted outside the senate’s doors.

As the state Senate convened a special session and took hours of testimony on a bill that would ban all abortions except in cases of rape, incest, and life of the mother, they could hear repeated calls of “let them choose” and “vote them out” from outside the chamber doors.

Indiana is the first legislature to weigh new restrictions on the procedure following the Supreme Court’s decision to overturn Roe and revoke a national right to abortion.

The vast majority of the protesters were pro-abortion rights, outnumbering a small group of anti-abortion rights demonstrators who held signs outside the statehouse.

The protesters have little chance of changing the legislature’s course, since Republicans control both chambers with legislative supermajorities as well as the governor’s office.

State senators heard testimony from roughly 30 people on Monday, only about 10 percent of the 280 people who requested to speak.

Across the street before the session began, Vice President Kamala Harris convened a roundtable of dozens of Democratic legislative and state leaders to condemn the Republicans’ sweeping ban on abortions. The proposed Indiana legislation is not a so-called heartbeat bill, but a total ban with narrow exceptions.

“I am here to support these extraordinary and courageous leaders and, in particular, on this day where Indiana is the first state since the Dobbs decision to convene a special session to propose a law that … essentially will be a ban on abortion for women,” Harris said. “When you understand how a woman’s body works, you will understand that the parameters that are being proposed mean that for the vast majority of women, by the time she realizes she is pregnant, she will effectively be prohibited from having access to reproductive healthcare that would allow her to choose what happens to her body.” 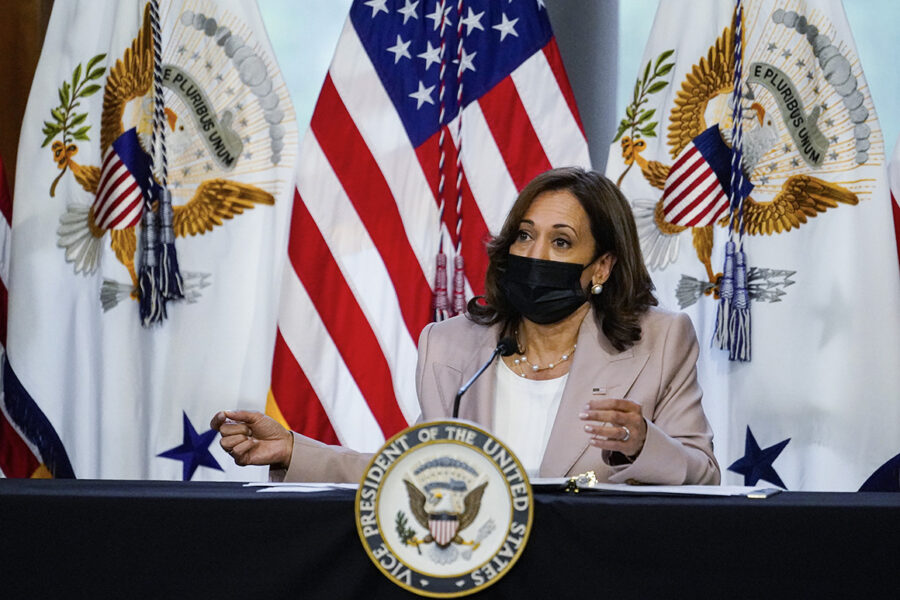 The Hoosier state has become an unexpected flashpoint in the national debate over abortion in recent weeks, following a 10-year-old rape victim who crossed state lines from Ohio for an abortion in Indiana — and following comments by the National Right to Life Committee’s general counsel, Indiana resident Jim Bopp, who told POLITICO that that girl should have carried her pregnancy to term.

“We have a piece of legislation that exactly no one likes,” said Mike O’Brien, an Indiana Republican operative and former legislative director for former Gov. Mitch Daniels. “So I think we’re on target.” He added: “This bill is pretty far away from what they want and will support. But the majority of the public supports exceptions and no enforcement.”

A month and a day since the Supreme Court ruled on the Dobbs decision that reversed the national right to abortion enshrined by Roe in 1973, Indiana Republicans have found themselves walking a delicate path. On one side, they face the anti-abortion rights activists they’ve sworn allegiance to in surveys. On the other side, they face a national backlash — a familiar place for them. In 2015, under then-Gov. Mike Pence, the state found itself at the center of a national firestorm after Pence signed a so-called Religious Freedom and Restoration Act, that led to some states declaring travel bans to the state as well as the NCAA and Nascar issuing statements criticizing the legislation.

Next week, Kansas voters are also expected to weigh in on abortion rights in a state ballot initiative. In Indiana, the debate is in the state legislature where the issue is currently monopolizing the agenda.

In the weeks leading up to the special session, Republican lawmakers largely kept quiet on their plans for proposed legislation. Republican state senator Kyle Walker, who represents the suburban Indianapolis city of Fishers, was the rare exception: Last week, he called for a more modest change, shortening Indiana’s current law banning abortions after 20 weeks post-fertilization to 12 to 15 weeks.

“With the overturning of Roe v. Wade, I believe we must strike a balance for pregnant women to make their own health decisions in the first trimester of pregnancy and also provide protections for an unborn baby as it progresses toward viability outside the womb, while making exceptions for rape, incest, health of the mother and cases of fatal fetal anomaly,” Walker said in a statement.

After POLITICO reported Bopp’s comments, Walker’s wife, the Republican consultant Jennifer Hallowell, expressed outrage in a Twitter post, writing that: “Some believe your 10-year-old daughter or granddaughter should be forced to carry her rapist’s baby and become a mother. Not me. Bopp’s quote sounds just like someone who’s never had to fear or suffer a man forcing himself on her,” she wrote.

In Indiana, the legislature’s actions in the coming days will have life and death consequences. Indiana ranks 3rd in the country for maternal mortality. Indiana Senate Republicans have proposed funding $50 million in pregnancy services alongside their abortion ban.

The special session could last until Aug. 14 but legislative leaders have said they will conclude their business within two weeks.

Democratic state senator Jean Breaux, who took part in the roundtable with Harris, asserted that the Republican-backed legislation will lead to higher maternal mortality.

“Total abortion bans, similar to the one proposed by Indiana Republicans, will lead to a 21 percent increase in the number of pregnancy-related deaths overall, and a 33 percent increase among Black women,” Breaux said in a statement. “This does not include the deaths resulting from attempted abortions in potentially dangerous, unlicensed facilities. Lack of abortion access in a state with abysmal maternity care will kill women.”