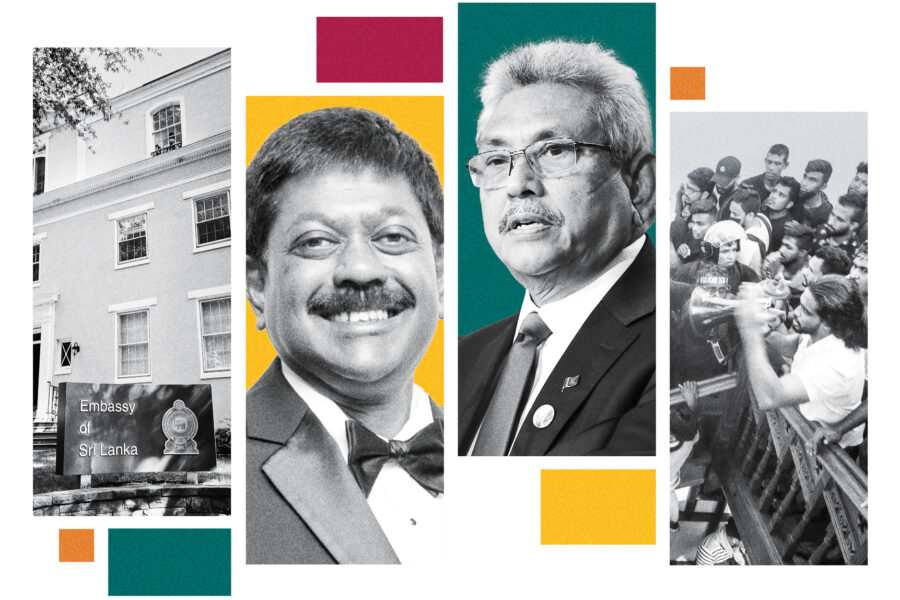 The U.S. is doing a small developing country’s dirty work in prosecuting its ex-ambassador for fraud, and it may eventually be cause for discomfort along Embassy Row.

In normal cases, for a foreign diplomat with an instinct for pilfering from their own government, Washington represents a safe posting. Far from home, entertainment expenses can be padded, real estate prices exaggerated, lobbying and PR-consultant fees manipulated. The only thing the bean-counters back at the foreign ministry need to know is that the American capital is an expensive place. Thanks to diplomatic immunity, whatever workplace scams get cooked up are unlikely to interest the local authorities here.

Still, an unusual proceeding that quietly concluded in a federal courtroom this week suggests there are limits, even with immunity.

The case of former Sri Lankan Ambassador Jaliya Wickramasuriya, who pleaded guilty to defrauding his own government out of $332,000, has gotten significant play in his crisis-stricken home country, where anti-corruption protests this month ousted the president. One of the major complaints against the now-former leader (and his brother, another former president; and their brother, the just-ousted finance minister; and their other brother, a former speaker of parliament) was that they filled the government with crooked relatives.

Case in point: The ex-ambassador, a cousin.

In the Sri Lankan press, the fact that the scam had to be prosecuted by the U.S. government — rather than by the government the ambassador actually cheated — has become a sad part of the larger narrative about nepotism and corruption in the nearly two decades that members of the extended Rajapaksa family have dominated national politics. 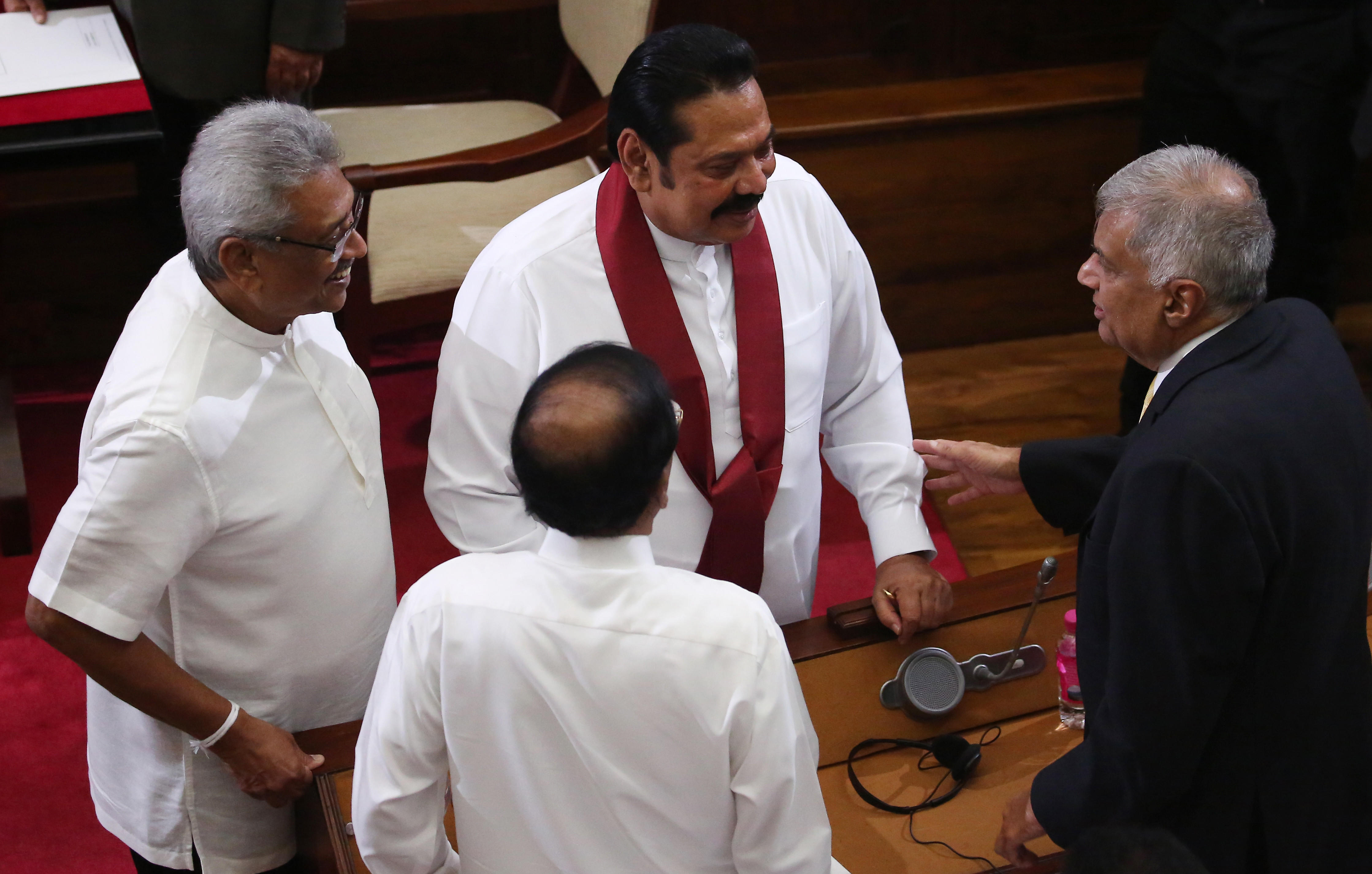 But in Washington, where the proceedings drew almost no coverage, a foreign envoy facing the American judicial system for stealing from his own treasury is actually a novel phenomenon, and potentially an important one — a spectacle that’s highly unconventional both as a matter of international law and international relations. In addition to offering a rare peek behind embassy walls, the Justice Department’s case against the envoy might just represent a cautionary precedent for future would-be diplomatic chislers.

“It’s extremely unusual,” says Anthony C.E. Quainton, a retired U.S. ambassador and former Assistant Secretary of State for Diplomatic Security. “Most governments are reluctant to surrender their officials to the jurisdiction of another country whose legal system they may or may not approve of. That’s certainly the case with us.”

How this particular diplomat wound up facing a potential five years in federal prison is a twisting saga that involves politics in both countries. It begins in 2005, when nationalist politician Mahinda Rajapaksa was elected president of Sri Lanka and promptly began naming relatives to top posts. One of them was Wickramasuriya, then an Atlanta resident who ran a tea-import business. In 2008, he became his country’s ambassador in Washington. 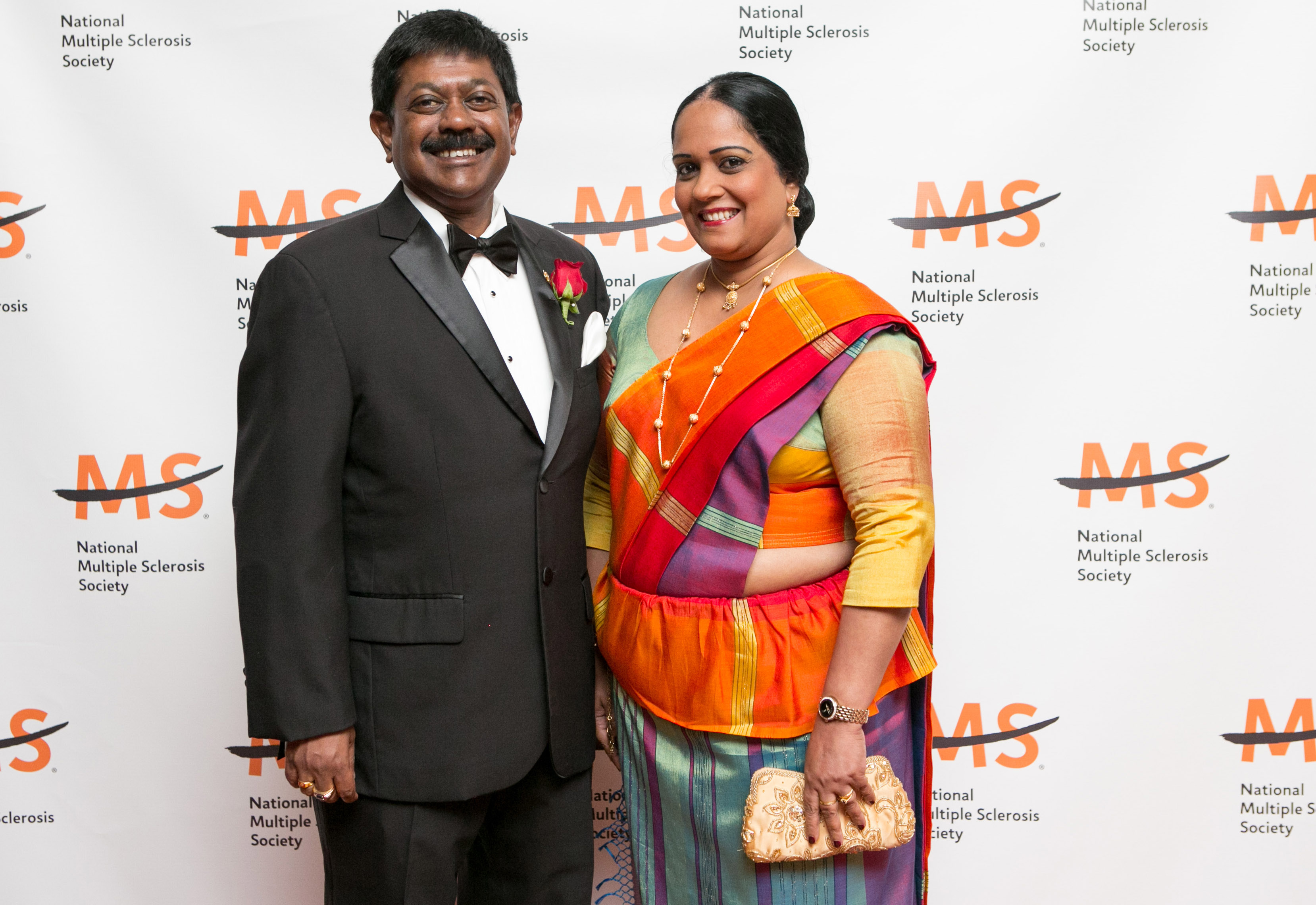 The swindle, as laid out in the federal indictment and the subsequent guilty plea, took place a few years later, in 2013. The embassy was looking to move out of its townhouse on Wyoming Avenue in Kalorama. Not unusually for a small country, the ambassador himself was intimately involved in the search. Working with a local real estate agent, he found a more suitable property just off Embassy Row, a few doors down Whitehaven Street from Bill and Hillary Clinton. The price was about $6.2 million. But by the time Sri Lankan taxpayers got the bill, it was north of $6.5 million. At closing, Wickramasuriya asked for suspiciously large checks to be cut for entities in Washington and Sri Lanka that, as far as anyone knew, had nothing to do with the purchase. Alarm bells went off. 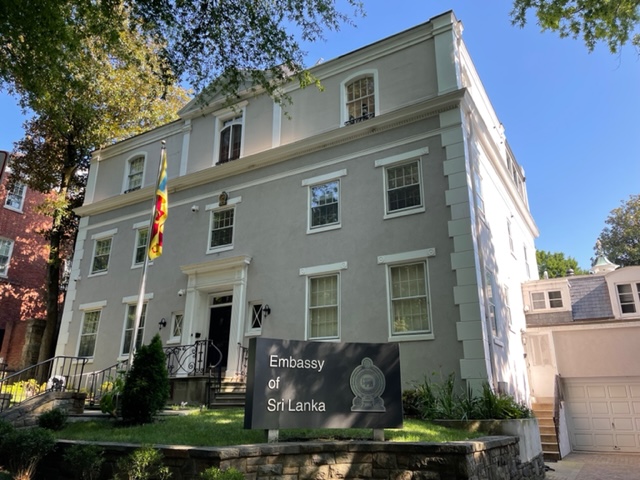 Things unraveled pretty quickly. Repeated blunderous attempts to get the title company to cut a $250,000 check to the Sri Lankan business caught the attention of authorities in both countries, who found it suspicious that the ambassador was using his personal email to direct payments. The ambassador hastily repaid the money. It was too late: Fraud is still fraud even if the loot has been returned. The Sri Lankan government, embarrassed, withdrew him as ambassador, which was welcome news at the State Department. (Losing the Washington gig wasn’t much of a punishment: According to a former senior Sri Lankan diplomat, his presidential cousin then tried to send him as envoy to Canada, something the Canadians refused.)

It all might have ended there, but in 2015, there was an election in Sri Lanka. And, in a surprise upset, the Rajapaksas’ party lost.

With the ex-ambassador’s patron out of power, investigators from both countries circled. Agents from Homeland Security Investigations traveled to Sri Lanka to work with that country’s Financial Crimes Investigation Division. Based on information shared by the Americans, he was arrested in Colombo, the capital, where he faced Sri Lankan corruption charges. But with the charges still pending, he managed to use his green card to return to the United States, ostensibly for medical treatment following a heart attack. He never went back home. The case was stranded.

Or was it? American prosecutors still believed they had the goods on wire fraud and money laundering charges. In 2017, according to diplomatic notes shared as part of the legal proceedings, the U.S. government asked Sri Lanka to waive the ex-ambassador’s immunity. The Sri Lankan government, now led by self-styled reformist opponents of his family, quickly agreed. A federal grand jury indicted him the following year. While there has been at least one famous case of a foreign diplomat winding up in U.S. custody after his home country waived diplomatic immunity — a Georgian diplomat who killed a woman in a D.C. drunk-driving accident — this case had one major difference: There was no American victim. The country the diplomat had defrauded was his own.

It’s not clear why U.S. prosecutors were so hot to trot on what was by then an old case involving a comparatively small dollar figure and money that had already been returned. At the State Department, officials typically don’t like this sort of prosecution, which other governments could theoretically deploy against Americans. On the other hand, for prosecutors, a highly connected envoy with family ties to a corruption-plagued government could theoretically give up information on fatter targets of more pressing interest to the feds. 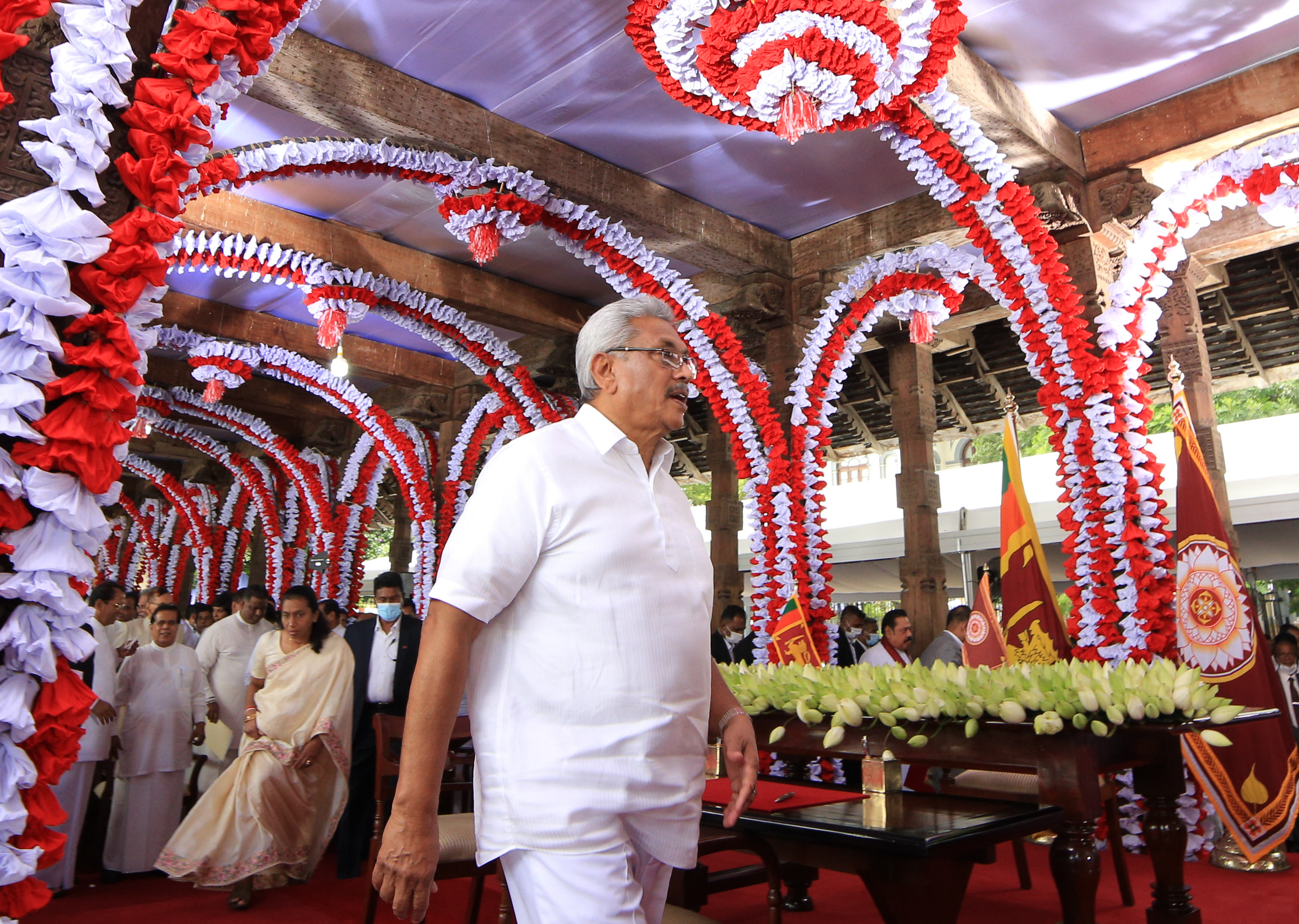 At any rate, the diplomatic waiver soon turned into a diplomatic headache. In 2019, after another election in Sri Lanka, the Rajapaksa dynasty returned to power in a landslide. Another brother, Gotabaya, became president. In a series of diplomatic notes to the American embassy, his government asserted that the immunity hadn’t been properly waived and should be reinstated. In court in Washington, the defense team introduced material suggesting, plausibly, that the waiver had been part of a broader pattern by the previous government to punish political rivals.

They got nowhere. The State Department maintained that once you’ve given up diplomatic immunity, you can’t just get it back.

And in federal court, prosecutors rolled out an argument that ought to put fear into would-be diplomatic crooks everywhere: The waiver didn’t matter, they said. Under international conventions, a sitting diplomat can’t be prosecuted, period, whether he’s accused of armed robbery, blackmail or jaywalking. But in the event the diplomat returns to the scene of the crime as a tourist a few years later, it turns out that the locals can nab him retroactively for anything that wasn’t formally part of the job. Graft, prosecutors archly noted, was not on an ambassador’s list of duties: “The Defendant’s official responsibilities regarding the purchase of a new embassy building did not require, and were not furthered in any way by, misstating the purchase price of the building and the fraudulent activity to arrange transfer of the excess amounts for his own benefit.”

As he copped the plea, the ex-ambassador may have been thinking that returning to the U.S. had been a big mistake. After all, his side was in power again back in Sri Lanka. A democracy for its entire independent history — one where governments have regularly lost, and left — the island nation has become increasingly illiberal of late, like a lot of countries. It was a good bet that the ruling party wouldn’t have pushed too hard to punish one of its own once it returned to power. 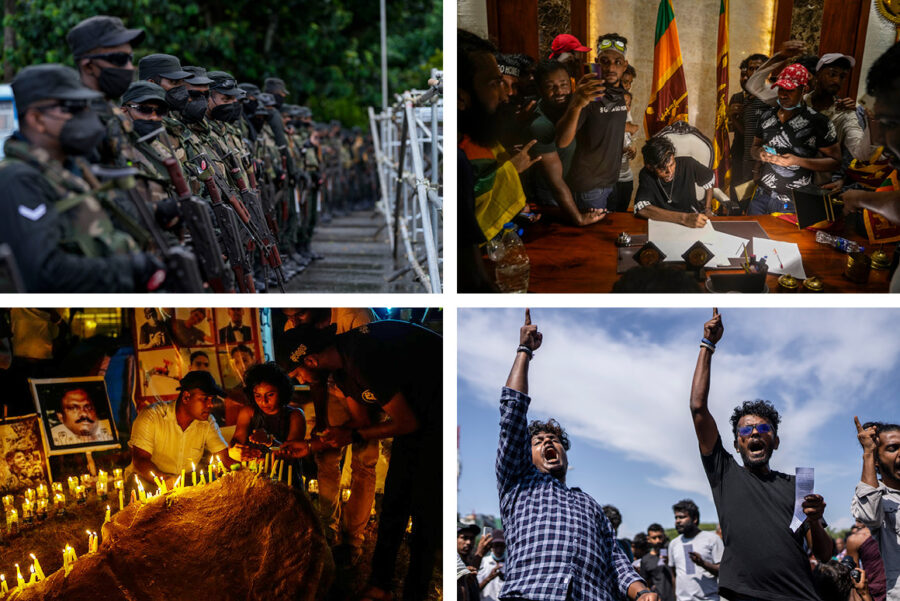 But in the three months between the plea and the sentencing, mass protests rocked the island nation, a onetime middle-income country that had descended into an economic crisis. Streets filled with furious protesters, some of whom occupied the president’s mansion, sharing viral images of citizens swimming in his pool. Other scenes weren’t so placid: Angry mobs torched the private homes of political insiders and Rajapaksa family relatives.

Meanwhile, at sentencing at the U.S. District Courthouse in Washington on Wednesday morning, there were just eight spectators on hand as Judge Tanya S. Chutkan handed down Wickramasuriya’s punishment: two years of probation and a $5,000 fine, in recognition of his having repaid the money. “Even though this was not millions of dollars, it represents a serious theft from the people, and by a person that they entrusted to represent their interests in the capital of the most powerful country in the world,” Chutkan said. “What you have done is a serious betrayal.” 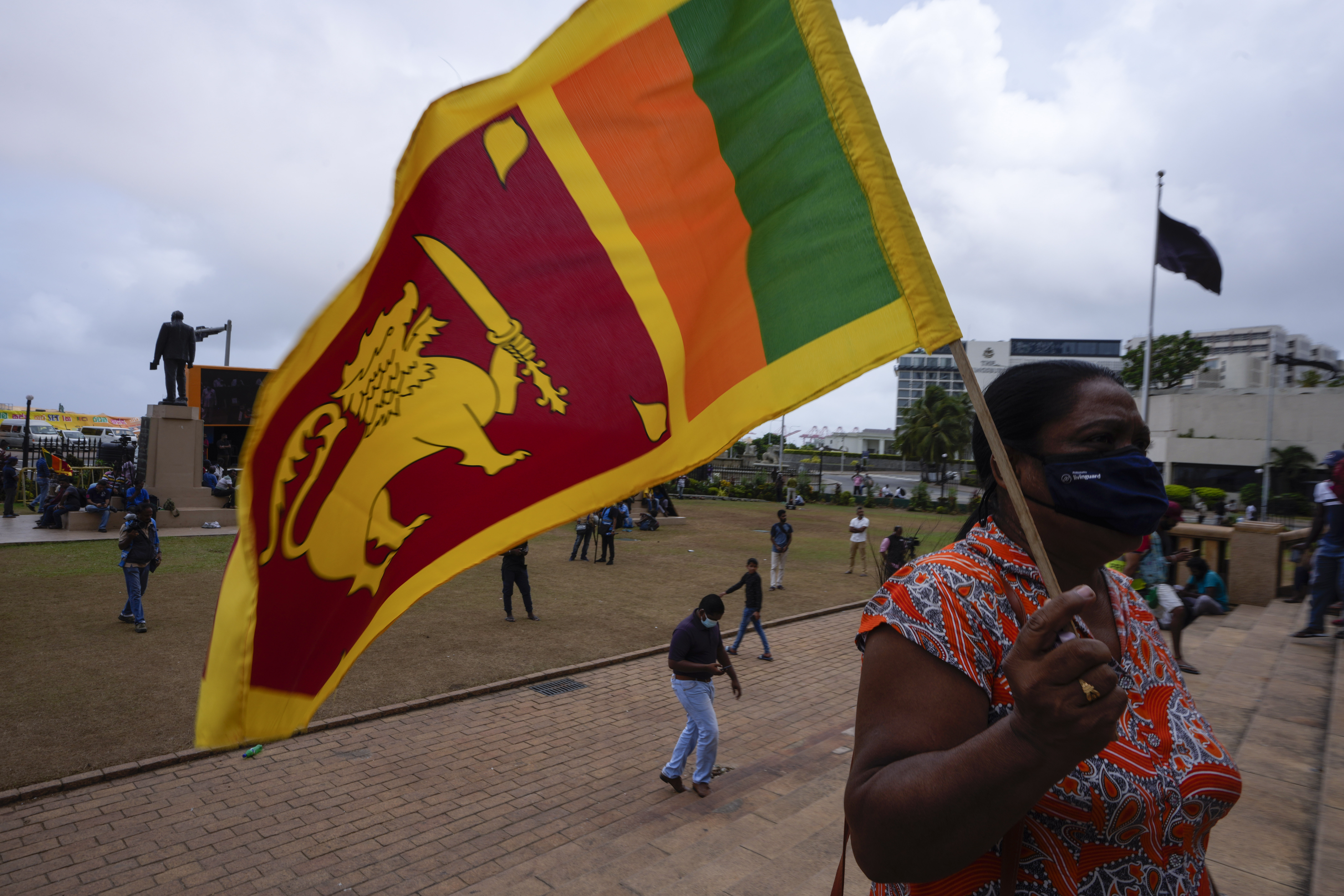 His voice cracking, the ex-ambassador apologized.

With that, he was free to go. The whole thing may wind up being mild compared to what he’d have to face in the chaotic political moment back home.