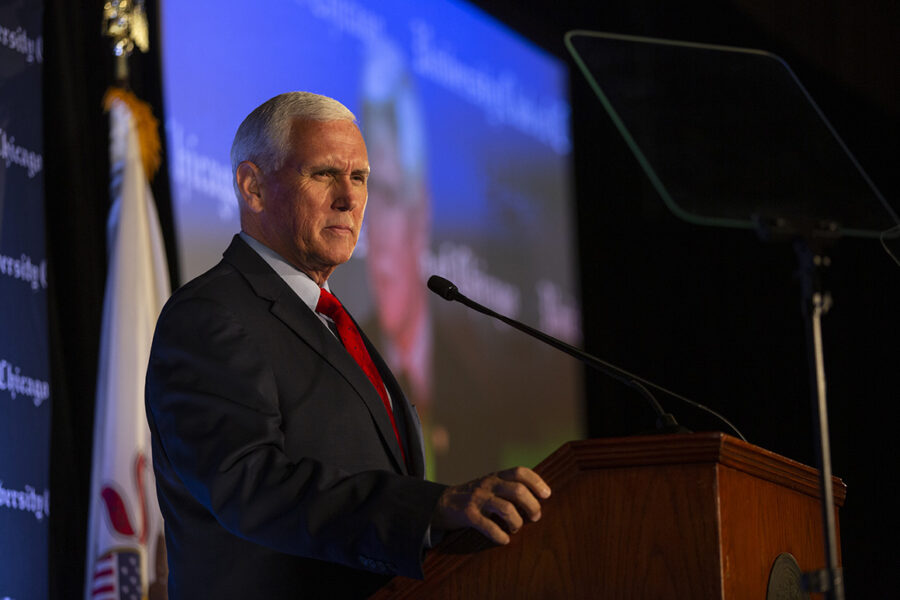 PEORIA, Ariz. — A room full of establishment-minded Republicans greeted Mike Pence here on Friday, many of them still chilled by the Jan. 6 committee’s revelations the previous evening about how close Pence and his security detail came to catastrophe during the riot at the Capitol in 2021.

They’d heard about the protesters who chanted “Hang Mike Pence!” and, according to committee testimony, then-President Donald Trump’s view that Pence deserved it.

Yet in an air-conditioned warehouse in the Phoenix suburbs, where Pence is engaged in a proxy war with Trump over the result of Arizona’s Aug. 2 gubernatorial primary, Pence didn’t mention any of that — or anything negative about Trump at all. And no one was surprised.

“Wow, what a great day,” Pence said when he stepped on stage.

For several days, the Trump-Pence split screen has been built up as not only a major swing state contest with implications for November, but as a test of the direction of the post-Trump GOP and a potential preview of the 2024 presidential primary. In his most overt undercutting of Trump yet in the midterms, Pence was in state to support Karrin Taylor Robson, a traditionalist Republican candidate for governor, while Trump rallied less than 90 miles away with her opponent, former TV anchor and election conspiracy theorist Kari Lake. 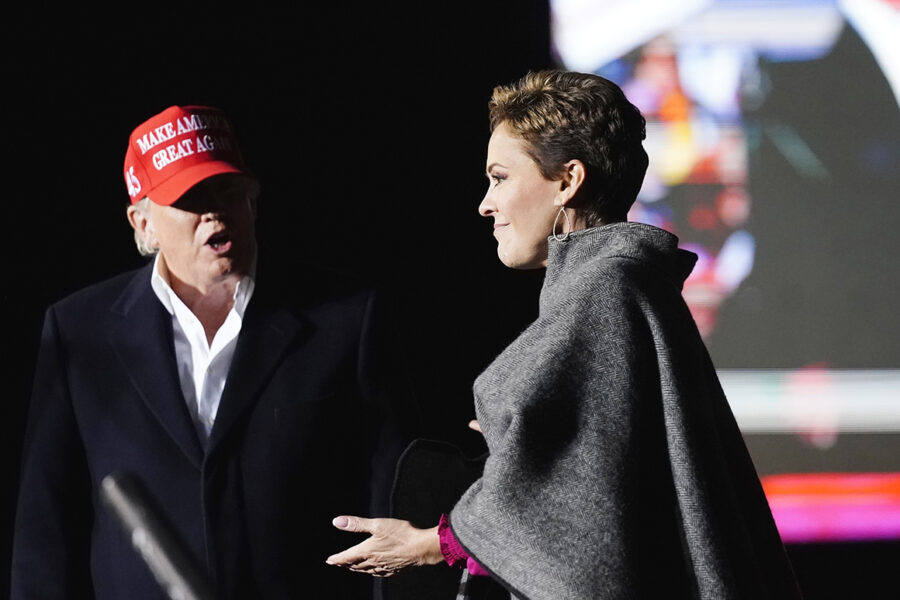 “This is the battle for the soul of the Republican Party in Arizona,” said Barrett Marson, a Republican political strategist in the state.

Yet what was laid bare more than anything in Arizona was just how lopsided that battle remains — and how hesitant the former vice president remains to break with his one-time patron in word even as he does so in deed.

“I think he needs to walk a tightrope,” Jack Duffy, a Republican precinct committeemember from Globe, said after Pence issued his regular, full-throated praise of the accomplishments of the Trump-Pence administration. “He can’t alienate a large voting group.”

The timing just made it more bizarre.

Pence has insisted in previous public appearances that he did not have power to overturn the election results in 2020 and has said “there’s almost no idea more un-American than the notion” that he could. He has added that he and Trump may never “see eye to eye” on the insurrection.

But Pence remains beholden to a party in which large majorities of Republicans still believe Trump’s falsehood that the election was rigged. In Arizona, a poll by the Republican firm HighGround Inc. found two-thirds of likely Republican primary voters in the state still think the election definitely or probably was compromised.

In that environment, there is little imperative for Pence to repeat the truth that it wasn’t. Last month, he was hustled out of a room in Ohio when reporters tried to ask him about Jan. 6. He did not take questions at his event here, and an adviser did not respond to a request for comment about the testimony on Thursday night.

Speaking at a tactical gear manufacturing company, Pence instead cast Robson as a champion of conservative policies, promising that she would replicate in Arizona the accomplishments of “all four years of the Trump-Pence administration.”

“No one worked harder for the Trump-Pence ticket in 2016 or in 2020 than Karrin Taylor Robson,” he said.

Pence criticized Lake — but for what he cast as her lack of true conservative credentials, not her insistence that the 2020 election was rigged.

Pence’s intervention in Arizona is not the first time he has defied Trump in a midterm primary. In Georgia, Pence campaigned on the eve of the primary with Gov. Brian Kemp, who became Trump’s nemesis for refusing pressure to subvert the election results showing President Joe Biden winning the state in 2020. But unlike in Georgia, where Kemp was already running far ahead when Pence arrived, Pence is coming in for Robson in a race she still could lose.

It was only recently that Robson, with the personal wealth to swamp the airwaves in Arizona, chased down Lake, the early frontrunner in the primary, dramatically outspending her in recent weeks. Robson’s campaign has benefited, as well, from the withdrawal of a third candidate: former Rep. Matt Salmon, who endorsed Robson. The GOP primary is widely considered a toss-up now, and the general election is expected to be competitive.

Chuck Coughlin, a veteran Republican strategist based in Phoenix, suggested Pence may benefit from his involvement in Arizona regardless of the outcome, with his appearance focusing public attention on anything other than Jan. 6. Following the event here, Pence was scheduled to travel with Robson to Tucson for an event focused on border security, a major issue in the primary — and, surely, in the 2024 Republican presidential primary.

“Absolutely it’s helpful to him,” Coughlin said. “It allows you to broaden the narrative out about what it means to be a Republican, and that’s a good space for Pence and [Arizona Gov. Doug] Ducey and the RGA and all of those people to be, because it’s not Trump.”

Coughlin said, “Trump’s interest is to make everything about Trump. That’s what he wants to do. To the degree you can narrate around that with other ideas, it’s super helpful to build a narrative around enthusiasm around the party about that.”

There are signs that there is at least some of that kind of enthusiasm surrounding Pence. Since he left the vice presidency, he has been well received by party activists at events in the early nominating states of Iowa, New Hampshire and South Carolina. Earlier this week in Washington, some Republican members of the conservative Republican Study Committee lauded him for his resistance to Trump’s effort to overturn the election.

On Friday, Robson called Pence “a model of courage and conservative leadership,” and the audience repeatedly applauded him.

But in the post-Trump GOP, Pence still occupies a political no-man’s land — viewed by some moderate Republicans as too tightly tied to Trump, and by Trump supporters as insufficiently loyal Trump’s cause.

In a New York Times/Siena College poll last week, Pence was the 2024 preference of just 6 percent of Republican primary voters, about even with Sen. Ted Cruz (R-Texas) and former U.N. Ambassador Nikki Haley, but far behind Trump and Florida Gov. Ron DeSantis.

Bill Gates, a Republican Maricopa County supervisor, said that in avoiding discussing Jan. 6, Pence is “probably doing what a lot of us do, which is to try to talk about the future.”

Over time, Gates said, the conversation surrounding the Republican Party may become “less and less about [Trump] and more about the vision.”

But given the party base’s fealty to Trump today, it wasn’t clear to Gates if Pence’s endorsement would benefit Robson. And he was far from the only Republican wondering that.

Asked if Pence has a constituency in Arizona, Nathan Sproul, an Arizona-based Republican strategist, paused.

With a large crowd expected for Trump in Prescott Valley, hours after Pence spoke, Sproul said of Pence’s calculation, “I’m a little surprised they’re doing the rallies on the same day, to be honest.”