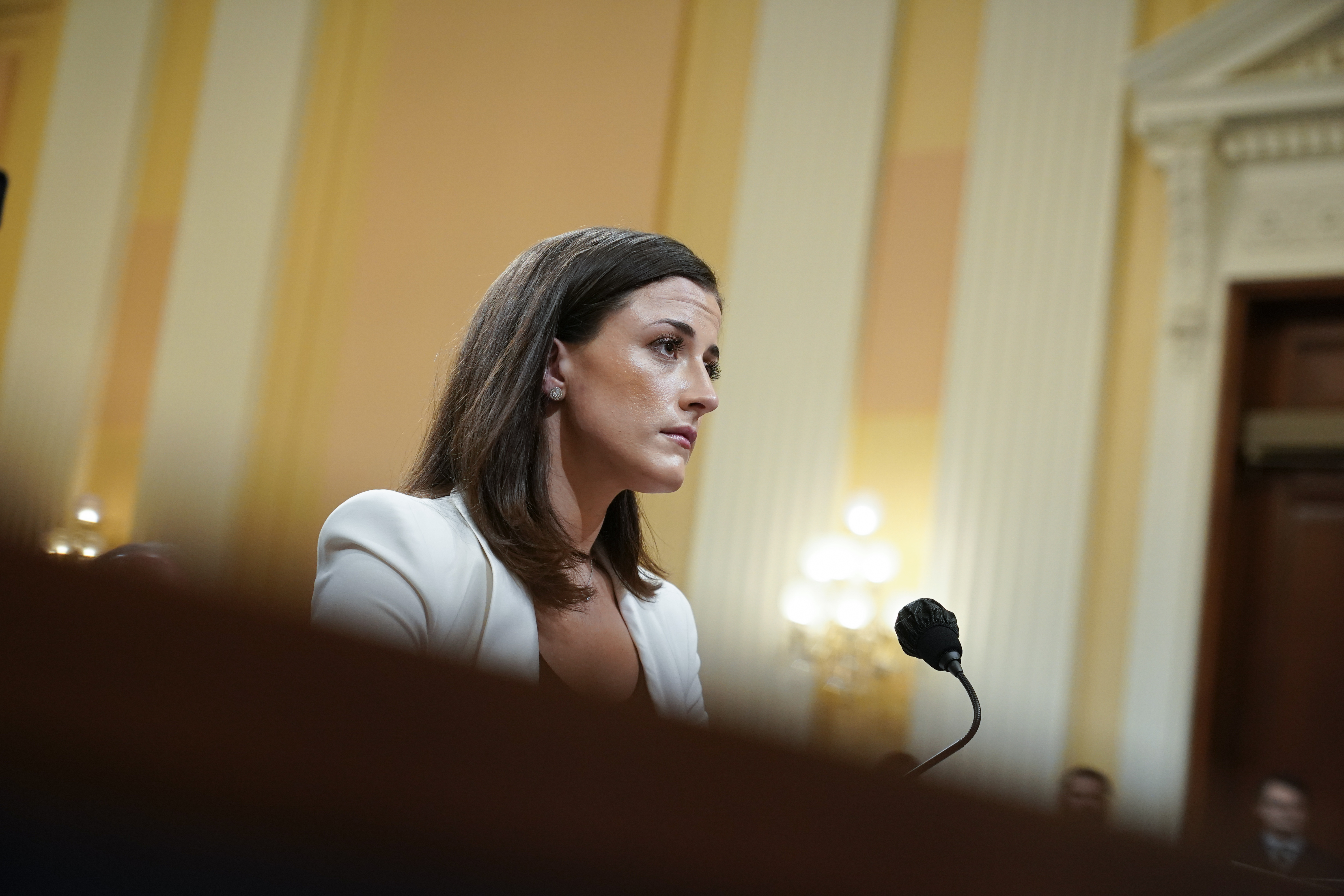 Griffin felt nervous. And for good reason. Hutchinson’s testimony before the Jan. 6 committee had been kept largely secret up till a day or so before. When it was revealed, it was under the billing that it would provide bombshells about what had transpired inside the Trump White House on that day.

As Hutchinson began laying out those eye-popping revelations, Griffin texted another former colleague, Sarah Matthews, slated to soon testify before the same committee. And she reached out to Olivia Troye, a former Trump national security official who was sitting in the hearing room as Hutchinson testified.

The women felt mutually stunned as they watched. They were also concerned for Hutchinson, understanding that as soon as she left that hearing room, she’d face intense scrutiny from the media, nasty messages and encounters online and, at times, in person, and the loneliness of being a Republican in Washington who speaks out against former President Donald Trump. After all, they each experienced that themselves.

When the proceedings were done they each reached out to Hutchinson, too.

“I was so nervous watching her,” said Griffin. “But she immediately had such a commanding presence — I was beyond proud to see my friend stand up before the world and tell the truth when so many others were too cowardly to do.”

The Jan. 6 committee hearings have been among the most dramatic and significant congressional investigations into the conduct of a White House in our nation’s history. They reflect months of research, painstaking work by investigators, and testimony from dozens of Trump officials, law enforcement officers and election experts. But a key component has been a small club of women who have provided critical testimony and created a support structure for one another to combat the intense backlash it’s produced.

The small group includes a current and former member of Congress, aides long exiled from Trumpland and those who only recently decided it was time to make a break. In phone calls and text messages, they have shared tips on how to report social media harassment, passed along advice on safety and security measures — such as the benefits of wearing a baseball hat while walking through an airport — and calmed the nerves of each other’s family members.

“It is a lonely space to come forward and part of it for me was to make sure that they knew that even though it feels lonely – they bully, they intimidate, they want to make you feel like there’s no one left in the world, that’s kind of the point – for me it was important for them to know I wasn’t going to waver on them and there would be others,” said Troye.

The “small, lonely girls club,” as one woman described it, is composed largely of former Trump aides who became disillusioned with his presidency. Griffin, his onetime communications director, resigned in December 2020 and has been critical of Trump since. Troye broke earlier, amid the first impeachment process when it was revealed that Trump had pressured Ukrainian officials for dirt on Hunter Biden. Hutchinson’s fissure came after Trump left office, when she was subpoenaed by the committee for her direct knowledge of what happened in the White House Jan. 6. Matthews, who served as the deputy press secretary under Kayleigh McEnany, broke with the Trump White House that day as Trump failed to calm the riots on Capitol Hill.

Having found themselves largely in the same political space — persona non grata in the professional infrastructure through which they made their careers — they formed a quasi- support network of their own. 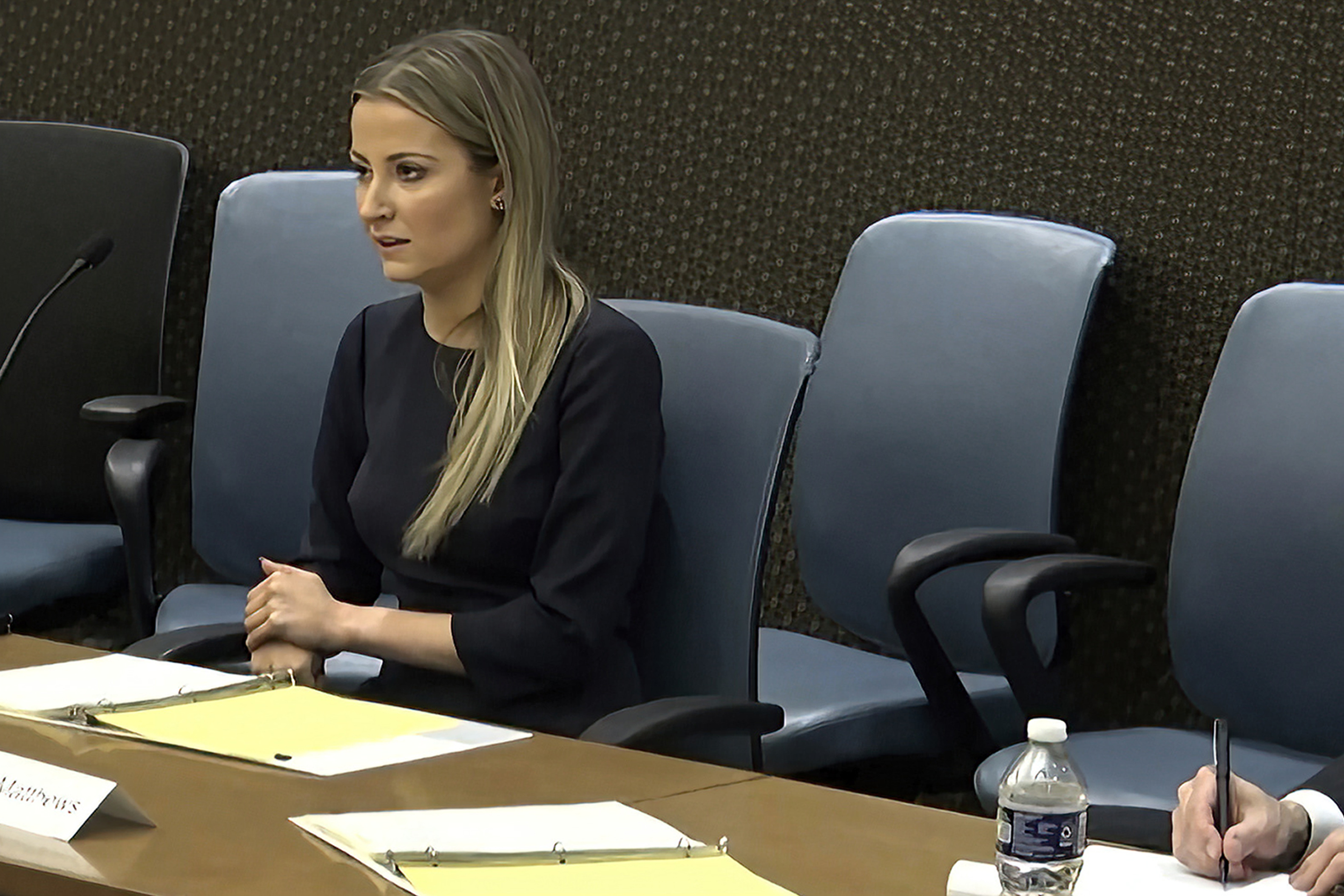 There is no central line of communication. But over phone and text, they have regularly kept in touch throughout the course of the Jan. 6 committee hearings. In interviews, they have stressed they aren’t digging for information or trying to influence the committee’s proceedings. Instead, they’re reminding each other constantly that, at one of the most intense moments of their young lives — Hutchinson is 26, Matthews is 27, Griffin is 33, and Troye and Grisham are 45 — they are not alone.

After Hutchinson’s testimony, several of the women said they formed what they called an informal kind of “rapid response” unit — defending her on TV and on Twitter from attacks from the right, who see the women as traitors to Trump, and the left, who question how they could have ever served a president whose shortcomings were so readily apparent to them in real time.

“It’s a very unique group that experienced such a specific, critical moment in history together and I think we feel bonded by it and are incredibly protective of one another,” said Griffin.

At the heart of the group’s formation is a belief — especially unique to these circumstances but true in other crisis points for Washington D.C. — that female political operatives carry different burdens than their male colleagues. It has been manifested in the death threats and smears they have faced, at times from random social media users.

“U are a f—ing traitor. U need to be raped. We know where you live bitch. Ur a f—ing Rino,” read one series of recent Instagram messages left on one of the women’s accounts and shared with POLITICO.

There also are the disparaging messages blasted out on social media by Trump himself.

“Her body language is that of a total bull…. artist. Fantasy Land!” Trump posted on his social media platform Truth Social, during Hutchinson’s testimony.

But it’s also been internalized by the group in a form of frustration that women like Hutchinson and Matthews – who only recently started their careers wide-eyed and faithful to the conservative cause — are taking the heat for speaking up, while their more senior male colleagues have settled back into Washington life. In particular, it gnawed at them that former White House counsel Pat Cipollone dragged his feet on testifying (and only did so in private, although it was recorded) until after Hutchinson went first.

“It’s empowering but also so disheartening to see these men in Congress who are so afraid of one man that they won’t do the right thing,” said Stephanie Grisham, Trump’s since-disaffected former press secretary, who has been in touch with Troye and appeared in media hits alongside other group members, too. “And then you’ve got this small group of us led in a way by Liz Cheney — not formally — knowing and experiencing threats of all kinds. I absolutely empathize with what every one of these women are going through. It’s a tough storm to face. You do feel it’s the world against you.”

To help them navigate these waters, the group has leaned on those who have seen rough waters before. Former Republican Rep. Barbara Comstock, an early Trump critic, said she has gotten to know Troye and Griffin as fellow conservative women over the past year. An attorney from Virginia, she told Griffin she would be happy to help Hutchinson with any legal support for speaking out.

“I’ve had women friends contact me to say they want to support these women because they are the kind of stand up women we’d all like to have as staff and hope we were as staff or members. And they know it can be lonely when you stand up,” said Comstock. She noted that as a mother she would have been “pretty ticked” that Cipollone, who has a daughter in Hutchinson’s age range, “had to be dragged to testify after Cassidy.”

“But I guess cleaning up Trump’s mess — ketchup and all — is assumed to be women’s work!” Comstock added, in reference to Hutchinson’s testimony that Trump, in a fit of rage on Jan. 6 threw a plate with ketchup to the floor, which Hutchinson tried to clean up. Trump denied the episode.

In addition to Comstock, the group has also viewed Republican congresswoman Liz Cheney, the vice chair of the Jan. 6 committee, as an inspiration. The congresswoman has talked with both Griffin and Hutchinson. And in a speech earlier this month at the Reagan Library in Simi Valley, Calif., she praised them — though not in name — and others for speaking out.

Despite the support from Cheney, the experience has been altogether unenjoyable. The women have been accused of speaking out in order to advance their career or get opportunities to appear on cable TV. Their one-time colleagues — and even some family members — have stopped talking to them. Their job prospects have slimmed, though they said Comstock has been trying to help on that front. A thread of fear is now woven through their lives, like when associates offer their homes as a place of refuge to wait out the fallout from a hearing.

There are better, more uplifting moments, too. Troye said she’s been heartened by the random mothers who have reached out to her to relay how much they admire Hutchinson for testifying.

“Ms. Troye, please tell Ms. Hutchinson I want my two daughters to grow up with her courage,” read one Twitter direct message.

But mainly, as the Jan. 6 hearings have progressed, it’s been a sense of surrealness that has crept in. They’re young. In normal times, they’d be starting their careers or moving towards the arcs of their professional achievements. Instead, they’ve been thrust into central roles in a historical drama — one that could very well determine the future of U.S. governance.

They spent their careers as Republicans never conceived that they would get marooned on a political island by themselves — alienated from their party and largely alone.

“When I ran into Alyssa before an interview with Jake Tapper before I went to the hearing for Cassidy we talked about it,” recalled Troye. “‘Did you ever imagine we’d be sitting here in this situation like this?’ Never.”