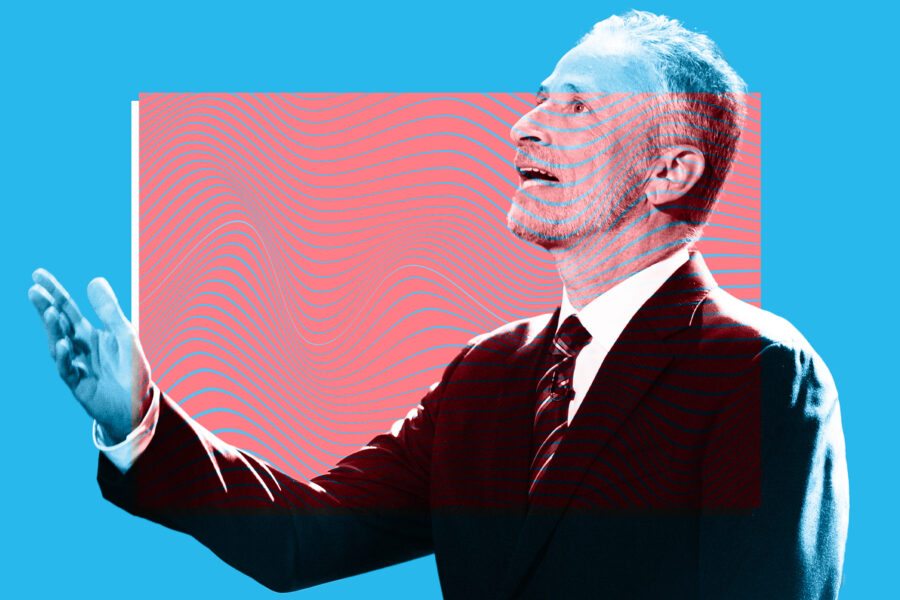 Joe Biden should run for president in 2024. But if he decides against it for whatever reason, and the Democrats want a serious shot at retaining the White House, Jon Stewart should run on the Democratic ticket instead.

To get the “seriousness” question out of the way right off the top: Stewart’s definition of being an entertainer has him wrestling with the kind of big, serious topics that actual politicians specialize in avoiding. He spends his time recording an AppleTV show and podcast interview show on policy issues such as abortion, climate change, gun control, misinformation, modern monetary theory and other wonky-current topics, with the occasional Judd Apatow and Mark Cuban appearance thrown in for gloss.

So he’s clearly engaged enough for the job. But the bigger reason is that he’s a better fit than most politicians for what modern politics has become.

The 2024 presidential race is guaranteed to be a carnival, waged 8 years after former President Donald Trump blew up the whole idea of “normal,” and four years after a Covid-shadowed, conspiracy-fest of a campaign. Stewart is not just one of our most wildly popular comedians: His years hosting the Comedy Central’s Daily Show made him one of the effective communicators in public life. He’s living a fairly low-key existence, and using his multiplatform showbiz skills to advocate for issues he cares about.

Is this a real possibility? Maybe not. But it’s certainly on people’s minds. You could tell something was in the water at the recent Mark Twain Awards show on PBS. Steve Colbert, Dave Chappelle and Pete Davidson all raised the prospect of Stewart running for the White House in their tributes to Stewart, this year’s winner of Twain Prize for American Humor. All did so with a requisite punch line, but in watching it you can’t help but think they know something the rest of us aren’t yet in on.

Chappelle said, “I wish that you would run for president, but I imagine that would be hard for a coke guy to do.” Davidson added that Stewart “is such an exceptional person that he really could be president tomorrow, but is too smart to do so.” And Colbert is worth quoting at length, because it’s pretty darn funny:

“Of course Jon is a brilliant comedian. But his close friends know that Jon’s true passion is recreational anxiety. It’s his superpower. Instead of being bitten by a radioactive spider, Jon was bitten by a clinically depressed squirrel. But that, that is why he is the perfect person to publicly worry about the future of our democracy. Why so many people think he should run for president. And I get it. He’s got a lot in common with Bill Clinton. A keen intelligence. The Veganism. Rapid Aging.”

And no, Stewart’s superpower isn’t really his anxiety. It’s his internationally renowned sense of humor, and his ability to create a sense of direct connection with the people he’s talking to. It’s the shared sense of collective outrage among the non-insurrectionist-supporting America. We know this is absurd, he conveys when he talks about current events. But his true message isn’t just the absurdity. It’s the “we” — the sense of shared values. That’s the heart of any successful run.

Trump turned an entertainment career into a political one not by growing into the moment, but by dragging politics further into the zone of entertainment. Since then, if anything, he’s been one-upped by Ukrainian President Volodymyr Zelenskyy, a professional comedian and television star who played a president on TV, and, in face of the brutal Russian onslaught, has parlayed that deftly into a real-life role as one of the world’s most admired and effective leaders. Increasingly, being TV-savvy isn’t just a bonus for a world leader. It’s a core requirement.

A recent very popular Reddit thread also speculated on who should run for president in 2024 and Stewart was widely mentioned. And it’s clearly a topic Stewart has thought about. He told Kara Swisher this spring, “Oh god, how could you not?” while joking about seizing the wheel from a drunk driver when asked if he was thinking about running for office. There was humor in his voice when Swisher first broached the topic, but then Stewart settled into seriousness when talking about the fundraising and the absurd mechanics in political campaigns before concluding with: “sometimes I feel like I can be more effective on the outside than on the inside.” I read “sometimes” as the operative phrase on the topic. He’s obviously been running the traps on a pivot to politics.

If Stewart ran for president, could he reach a wide swath of Americans? Stewart is known as a liberal, but his biggest cause has been deeply patriotic, and very nonpartisan: He has been the most profoundly effective and powerful engine behind efforts to provide support to the 9/11 first responders and victims. That effort has grown into a fight to provide benefits and supports for U.S. veterans who suffer from exposure to the toxic effects of burn pits while deployed overseas. He’s famous for trying to help firefighters, police and veterans, a generally right-leaning bunch. That’s one hell of a base to run on.

He’s also a truly gifted public speaker who can break down our most complicated political debates into commonsense arguments for effective policy. Watch his 2019 congressional testimony on behalf of 9/11 responders. The 5000-plus comments on the YouTube link to his appearance are near unanimously positive. One commentator said: “Every single word measured. Every single sentence short, and to the point. Every point made hit with devastating accuracy. Every sentiment genuinely felt. No bull, no waffle, no attempt at even handedness. Integrity. Passion, articulation. One of the single greatest speeches I have ever heard.”

He’s also great at political rallies, as evidenced by his eminently viewable and hilarious “Rally to Restore Sanity and/or Fear” held on the National Mall in 2010. An estimated 215,000 “people who think shouting is annoying, counterproductive, and terrible for your throat” (according to the rally website) turned up to watch Colbert and a range of musicians in what was intended to be a spoof of Glenn Beck’s “Rally to Restore Honor” but morphed into a heartfelt call for a more constructive and less vitriolic political dialogue.

But perhaps the most important reason for the Democrats to consider Stewart is who he’d be running against.

Let’s take a look at which Republicans might run in 2024. Trump may run; Stewart has far more TV experience and is plainly much smarter, with more agility before crowds. Trump’ go-to show of strength has been his ability to pull thousands for his political rallies because they are viewed as entertainment by his supporters. A Stewart rally would be a road show of the most hilarious and civic-minded entertainers known today. And on a debate stage? Stewart would never let Trump get away with his vague policy-thin repetitious platitudes and harangues. Game, set, match.

There’s a very good chance that the most popular, and most dangerous Republican candidate would be Tucker Carlson. Carlson helms the most widely watched primetime show and news reports over the years continue to raise his candidacy as a real possibility. Jonah Goldberg, who worked at the Weekly Standard in the mid-90’s with Carlson (I was there too), told Swisher’s Sway podcast that he thinks “Tucker smells the opportunity to be the new Pat Buchanan of the right. And that means running for office at some point. And he would be good as a candidate.”

If Carlson does run in 2024, his broad name recognition, demagogic gifts and deep support among Fox viewers could make him the nominee. His years of TV experience would make him a formidable challenge for any Democratic opponent. As a close student and avid fan of Daily Show episodes, I would think that a Tucker Carlson run would be like a red cape waved in front of Stewart. Carlson’s bloviating fetishization of nationalist and autocratic tendencies seems like a boil that Stewart’s comic umbrage could most effectively lance.

Carlson and Stewart famously tangled on a 2004 “Crossfire” episode where Stewart was invited on to talk about a book he wrote and ended up hilariously castigating Carlson and Paul Begala, the other “Crossfire” host, on the damage their fake oppositionality and incessant fire-starting was doing to America. It wasn’t just great TV, it was a snapshot of what the future could hold: a presidential race where America’s most watchable and admired television personalities, albeit with polar opposite audiences, battle it out over the future of the world.

In the spring podcast interview with Swisher, Stewart seemed shocked by the prospect that Carlson could be a candidate for president in the 2024 cycle. His response: a deadly serious, “Oh Jesus. Don’t ever say — that’s just not even…” The podcast closed with Stewart saying that Carlson as a potential presidential candidate was “terrible” and was “bumming me out.”

On Thursday, at the opening event for the new media company Semafor, Ben Smith pushed Carlson on whether he would run for president. Carlson brushed him off, which is exactly what every presidential candidate is supposed to do at this stage of the political cycle.

If Biden doesn’t run, Stewart would start with a massive name ID advantage over any other Democrat and a vast legion of Daily Show viewers. The show ended 6 years ago, but Trump’s jump from TV to the White House has taught that viewers — even of a declining reality series — can be committed voters. By that measure, Stewart starts off better positioned than nearly anyone else in the Democratic field from the start.

He could do this — and if Carlson runs, he may feel like he has no choice.