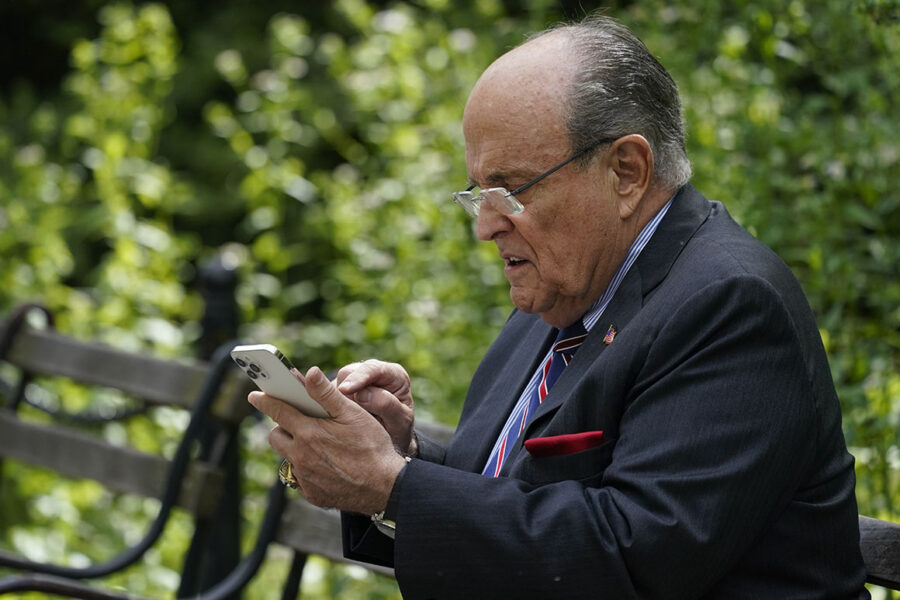 Rudy Giuliani has been a national punchline for so long that the high hilarity that once accompanied his antics is finally no more.

Remember the time President Donald Trump’s former lawyer butt-dialed an NBC News reporter, not once but twice? Or his habit of mistakenly sending messages and photos to the wrong numbers? The time hair dye dripped down his temples like his head was melting? That weird Abraham Lincoln impersonation he did for a political ad? Sacha Baron Cohen pranking him in a movie? The deranged speech he gave last fall at a 9/11 memorial dinner and his denial that he was under the influence while giving it? The time he said $135,000 “isn’t pocket change, but it’s pretty close to it”? Or how about reporter Olivia Nuzzi’s hotel bar interview with Giuliani, his fly unzipped and drool inching down his face? His appearance on “The Masked Singer“?

These warm memories of Giuliani the political buffoon — the man willing to say stupid things in defense of Trump, the imaginative smear artist, the braying conspiracist, the muddled elderly man — have tickled us for so long. But the 78-year-old suffered such a chastening this week that human compassion demands that we stop laughing at the former mayor’s suffering and start sobbing instead. The man has become a pathetic spectacle, besieged on every front and humiliated at every juncture. Just give a gander at Rudy’s septimana horribilis.

How much further can a man fall than being a MyPillow pitchman? Plenty. The FBI is still investigating Giuliani’s Ukraine activities, and in June the Washington, D.C., Office of Disciplinary Counsel filed ethical misconduct charges against him.

You could assemble an anthology from Rudy’s recent press clips (see: “What Happened to Rudy Giuliani? It’s a Long Story”; “I Must Be ‘Really Stupid’ Because Rudy Is F*cked”; “Is Rudy Giuliani Losing His Mind?”; “The Crazy Last Days of Rudy Giuliani and Steve Bannon”; “How Rudy Giuliani Went From 9/11’s Hallowed Mayor to 2021’s Haunted Ghoul”; “What Happened to Rudy Giuliani?”; “How Rudy Giuliani Turned Into Trump’s Clown”; “The Fog of Rudy”; “What Happened to America’s Mayor?”) that would surpass the DSM-5 for pure nuttiness. Often, Giuliani pieces make reference to his drinking — he says he likes scotch with his cigars but he has no drinking problem, and contests any statement to the contrary. Last month, he called Trump campaign aide Jason Miller a liar in a mid-June tweet (later deleted) after Miller testified to Giuliani’s alleged tipsiness on election night 2020. Giuliani is said to have advised the president to declare victory that night — in her opening statement, committee vice chair Rep. Liz Cheney, Republican from Wyoming, repeated that claim and said it came from “an apparently inebriated Rudy Giuliani.” In his deleted tweet, Giuliani wrote that he had forsworn drink that night. “My favorite drink..Diet Pepsi,” the tweet read.

Was a categorical denial the smartest strategy? When accused of doing something really stupid, like advising the president to declare victory prematurely, shouldn’t you think about availing yourself to the clemency automatically granted to people who confess to having imbibed too much — even when no sipping has occurred? It’s not too late, Rudy. As your miserable week turns into a miserable month and then a miserable year, you could do worse than to find something outside of yourself to blame your troubles on.

Send cigar bar tips to [email protected]. No new email alert subscriptions are being honored at this time. My Twitter feed drinks sparingly. My RSS feed says drink deep from the fountain of life or not at all.