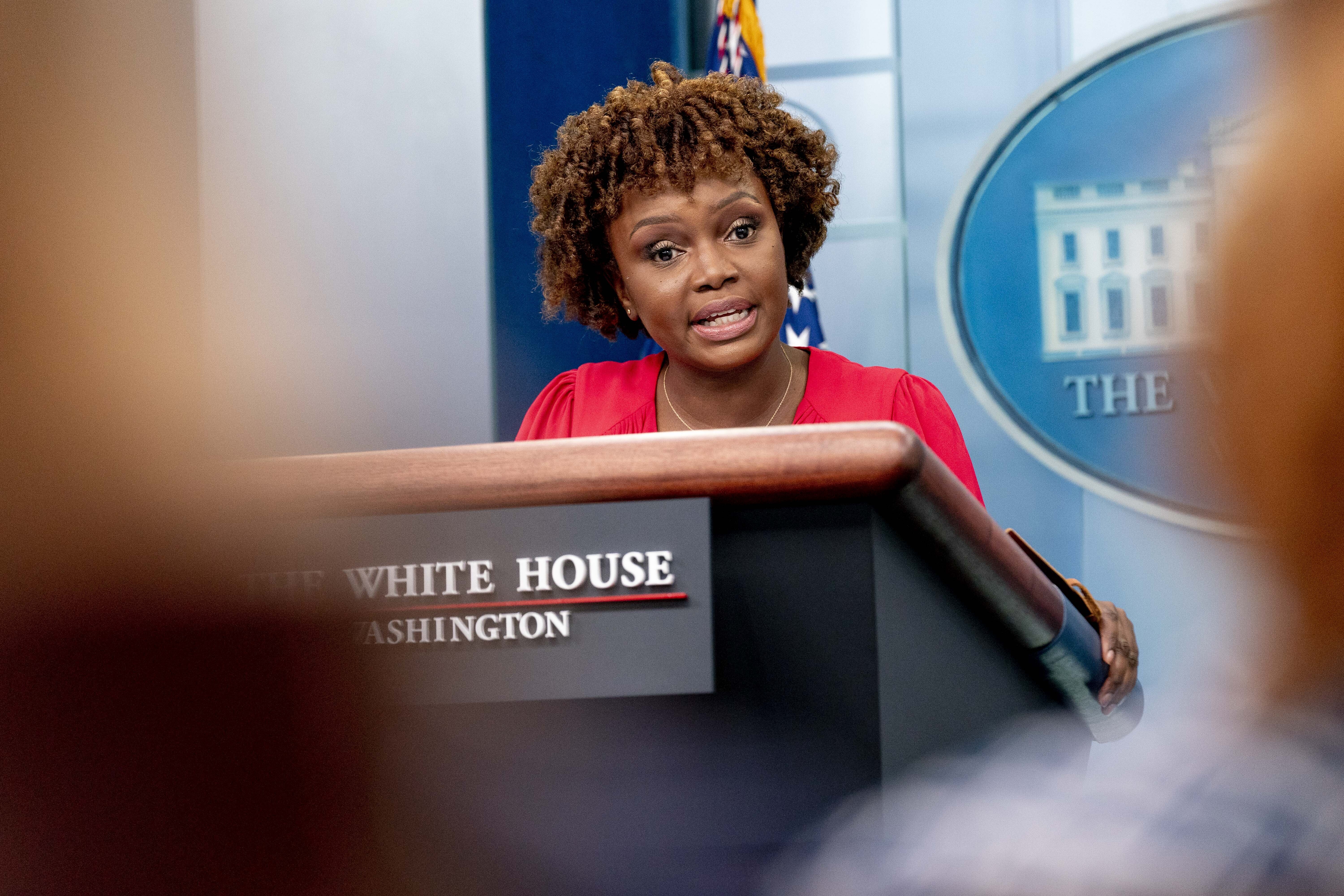 Her answers have baffled reporters, and even made some of her White House colleagues wince. She has increasingly found herself sharing the podium or splitting briefings with John Kirby, who has been taking the lead on foreign policy and at times appears to function as a co-press secretary.

And Republicans have zeroed in on her as a useful punching bag.

Jean-Pierre officially took the podium in May, becoming the first Black and openly LGBTQ woman to hold a position long dominated by white men and women. She signed on as the administration faced a national infant formula shortage, the overturning of Roe v. Wade , soaring inflation and high gas prices, the ongoing war in Ukraine, gun violence, and bad poll numbers for the president.

Against such a difficult backdrop, her stumbles in several instances have made her appear underprepared — in moments quickly weaponized by the right.

She was unaware that Interior Secretary Deb Haaland had tested positive for Covid and didn’t know Biden had been with Haaland two days before at a Memorial Day event. “Oh, were they?” she said, to which the reporter pointedly noted pictures of the pair.

And when asked that day about the president telling Naval Academy graduates that he had been appointed to the academy in 1965 — a claim met with skepticism — Jean Pierre said: “I didn’t hear that part of the speech.”

Reporters were confused by her refusal to answer questions at a recent briefing about the last time the president had been tested for Covid-19, something her predecessor regularly disclosed. (He tested negative, senior officials later told NBC News.)

Press secretaries can’t possibly keep tabs on every story line so it’s not unusual for them to acknowledge when they don’t know the answer and pledge to find more information after the briefing.

And while White House reporters love to complain about non-answers from communications officials, many have privately grumbled that when Jean-Pierre does have answers, they are often vague and rarely stray from the pre-written talking points prepared in the binder at the podium.

“At a certain point it wouldn’t surprise me if people started voting with their feet,” one White House reporter told POLITICO, predicting the lack of news from the briefings could result in waning attendance of reporters.

“She is so focused on not making a mistake that she doesn’t let herself speak freely,” another reporter said. “A lot of her responses end up becoming… it appears that she’s reading from a page.”

Through the White House, Jean-Pierre declined a request to be interviewed. But numerous current and former White House comms staffers and outside allies told West Wing Playbook Jean-Pierre deserves praise for her first month on the job.

They described her as quick and decisive behind the scenes, crafting the White House responses to national tragedies such as the school shooting in Uvalde, Texas. Several noted her political experience will be a boon to the administration as midterms draw closer. And another official said that Jean-Pierre has given the administration someone who could speak authoritatively about issues affecting Black women, which was particularly helpful following the reversal of Roe.

“She’s here precisely because of her respect for the indispensable role of the free press in our democracy,” deputy White House press secretary Andrew Bates said in a statement to West Wing Playbook. “She is proud of her briefings — which often run longer than the modern average and have included multiple Saturday gaggles. She loves the back and forth with the White House press corps, and her door is always open for any feedback its members are interested in giving directly.”

A Democratic congressional source told West Wing Playbook that the press secretary regularly solicits advice and counsel from Democrats across Washington, including members of the Congressional Black Caucus.

“She brings to the Brady Briefing Room a unique perspective that is important in helping to shape and tell the story of this President and his administration,” said the CBC chairwoman, Rep. Joyce Beatty, (D-Ohio), in a statement.

Some White House officials dismissed the idea that Jean-Pierre leans too much on the briefing books, or fears going off script.

“They would grumble regardless of who is at the podium and find ways of critiquing those individuals,” one senior White House official said of reporters’ complaints. Another official said of Jean-Pierre’s deferral of questions: “Singling her out like this is nonsensical. The alternative is the Trump model of outright lying and making things up on the spot — is that honestly critics’ preference?” The senior official declined to put their name on the statement.

Some Black communications officials in and outside the administration, along with allies of Jean-Pierre, feel White House leadership has set her up to fail by having Kirby, a white man who was in the running for her job, hovering nearby and taking the lead on foreign policy.

Jean-Pierre’s job has also been made more difficult because the White House has yet to name a principal deputy press secretary, the job she previously held. One person with knowledge about the discussions told West Wing Playbook that the White House has considered an outside Democratic comms official for the role, though an administration official noted the Biden White House has a policy of considering outside candidates for every role in a bid to increase diversity.

Minyon Moore, a former top Clinton White House political aide and chief operating officer of the Democratic National Committee, said she has on occasion offered advice to Jean-Pierre about the job, and said that she has observed her improvements in her first month.

“I also said to her: Do not let the noise get in your head, it can be a confidence crusher,” Moore recalled. “You take criticism well — which she does — and use it as a benchmark to [improve]. And everytime you course correct and do something better, you have to applaud yourself in this business.”