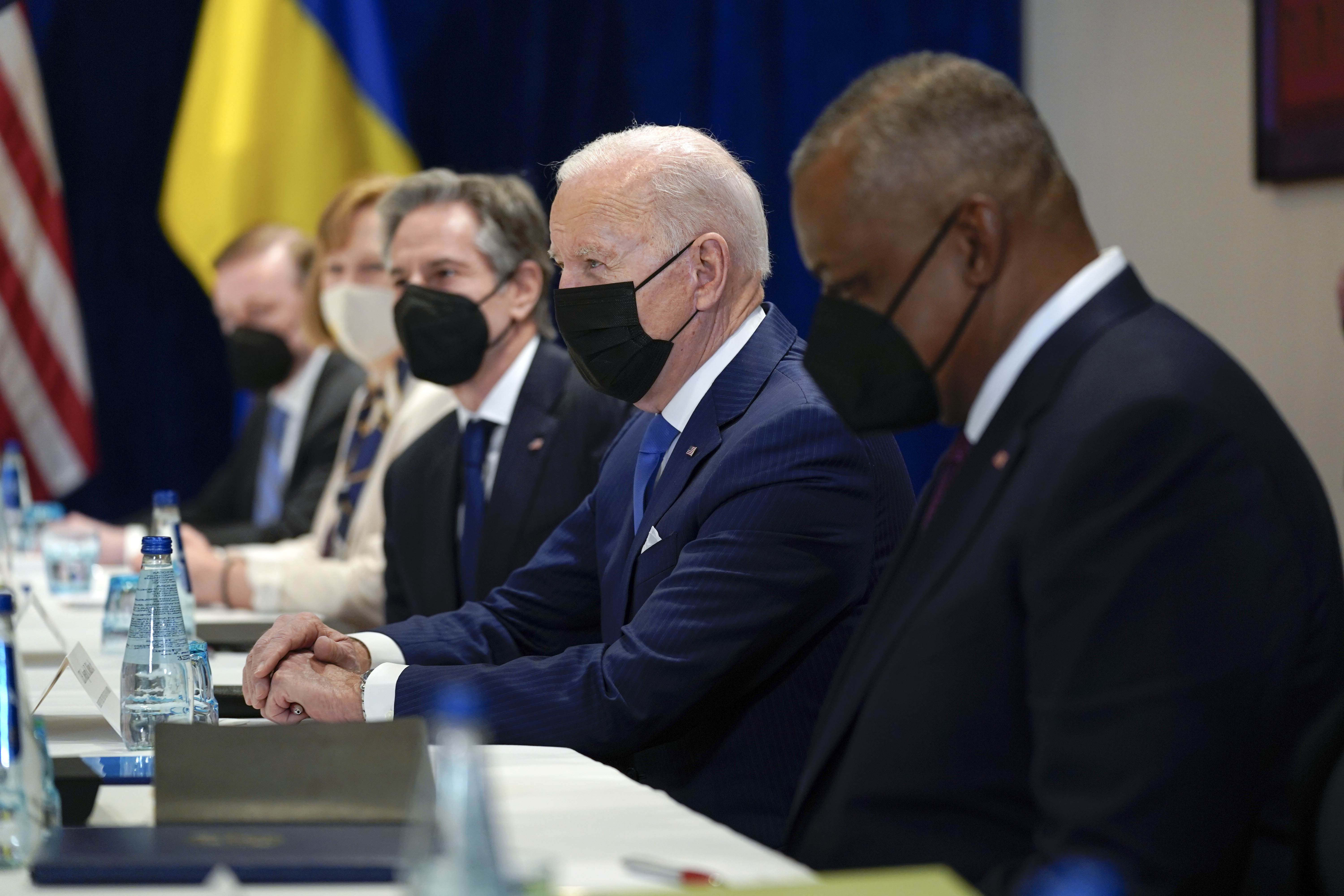 The war rages on. But President Joe Biden’s mission is now very different.

When Biden was last in Europe, just weeks after Russia’s invasion of Ukraine, his task was to pull together an uncertain alliance stunned by Vladimir Putin’s onslaught and heartened by Kyiv’s unexpected success in resisting it.

But now Biden heads back across the Atlantic for a pair of summits with a new assignment: to keep the continent committed to the cause as the invasion settles into a grueling, bloody battle of attrition that could last for many more months and cause continued global economic strain.

In many ways, Biden’s job next week is more difficult.

The war has begun to slip from international headlines. The president must convince other leaders, their economies battered by surging inflation, to keep funneling money and weapons to Ukraine instead of keeping them at home.

Some of his peers have been pummeled by scandal and defeat, their political standing weakened. And Biden himself has watched his poll numbers plummet as costs rise and a nation nervously awaits a Supreme Court decision that could roll back abortion rights and reshape the domestic landscape while he is overseas.

“He has a harder job now because of all the economic issues on the table but the support is still there,” said William Taylor, the former U.S. ambassador to Ukraine. “For now, Europeans are gritting their teeth and staying the course even though they have bigger problems with oil and natural gas than we do.”

“But the way to keep the alliance together is to lay out a way forward, a way toward success,” said Taylor. “That’s what the president needs to do.”

Biden will have two stops in Europe after Air Force One lifts off from Joint Base Andrews on Saturday: first, Germany for the G-7 summit and then a NATO gathering in Spain.

Biden has received high marks — even from some Republicans — on his management of the war but White House aides have resigned themselves to the reality that it likely will not change a single vote this fall, as the election seems certain to be dominated by inflation and other issues. Instead, they’re moving to prevent domestic public opinion from souring on the war and hampering Biden’s ability to execute his preferred approach to it.

For this trip, advisers say he will use the trip to push the allies to stay the course, declaring that Ukraine must be defended not just to deter future Russian violence but to send a message around the globe — namely to China — that united democracies will not allow autocratic aggression.

The agenda, according to the White House, is geared toward displaying support for Ukraine while trying to manage the disruptions the war has caused to the global economy, namely in energy and food prices. The president plans to once again support Finland and Sweden’s bids for NATO membership while working to assuage Turkey’s objections. The White House suggested that Biden would also champion a global infrastructure initiative and hinted that more sanctions on Russia may be unveiled.

“He came into office with the express purpose of revitalizing and reinforcing our allies and partnerships around the world and that’s what he has done,” said John Kirby of the White House’s National Security Council. “He has elevated these partnerships to meet the central challenges of our time.”

A year ago, Biden met with the G-7, a group of the world’s wealthiest democracies, on the English coast and was hailed for ushering in a return to normalcy after Donald Trump’s tumultuous term. At the time, Putin — whom Biden would meet in Geneva later that trip — was seen largely as a nuisance, a threat that paled in comparison to the challenges posed by China and the struggle to vaccinate the world against Covid-19.

Putin’s invasion of Ukraine in February upended the world order, sparking the largest conflict in Europe since World War II. But it also pushed the globe’s democracies to stand up against Moscow.

When Biden visited Brussels and Poland in March, he pushed Europe to balance the moral and geopolitical imperative to act on behalf of Ukraine along with the fears of further escalating the conflict and the economic costs of implementing an aggressive sanctions regime against Russia.

The West unleashed a punishing array of sanctions against Russia and rendered Putin a pariah on the world stage. Moscow’s hopes for a lightning decapitation of Kyiv failed, and the bonds between the Western nations tightened. Much to Moscow’s fury, a debate over expanding NATO to include Sweden and Finland is poised to dominate the alliance’s summit in Madrid.

But Putin didn’t abandon his war. Though the Russian military suffered immense casualties, Moscow redirected its efforts on Ukraine’s eastern Donbas region, where its supply lines are shorter and the Red Army could better exploit its overwhelming numbers. With brutal violence, Russia has made slow but undeniable progress, prompting Kyiv to urgently call for more weapons as its losses mount.

But as the war grows deadlier, strains have been begun to show among the allies.

Though Washington has authorized tens of billions of dollars in funding for Ukraine, there have been questions about whether some countries, namely Germany, have contributed their fair share to Kyiv. Russia’s blockage of Ukraine’s ports has contributed to soaring food prices now exacerbating the pandemic-fueled inflation gripping much of the world. And the sanctions against Russia, as well as bans on part of its energy sector, have led to surging gas prices.

“There’s growing sentiment that the sanctions aren’t actually hurting Putin’s ability to carry out the war but are having amplifying effects on energy prices and general inflation,” said Alina Polyakova, president of the Center for European Policy Analysis.

Some in Europe have tried to nudge Ukrainian President Volodymyr Zelenskyy to the negotiating table, believing that a brokered resolution could spare lives and stabilize economies. But Zelenskyy has refused to cede any territory to Putin, particularly after evidence of Russian war atrocities, creating a sense that the conflict in the east could last months if not years.

Biden himself will arrive in Europe weaker politically than during his last trip in March, his approval rating torpedoed by inflation as Democrats fear a wipeout in November’s midterms. Some of Biden’s closest allies have suffered recent political setbacks — British Prime Minister Boris Johnson barely survived a vote of no confidence while French Prime Minister Emmanuel Macron suffered a stunning parliamentary defeat — which could complicate their resolve.

“Even though the French president enjoys considerable sway over matters of foreign policy, his weakened position will likely produce a more cautious stance,” said Charles Kupchan, a senior fellow at the Council on Foreign Relations and professor at Georgetown University. That’s “not good news for the United States when Washington has been looking to Europe to shoulder more geopolitical responsibility.”

Many Western leaders have made surprise visits to Ukraine in recent weeks and there was rampant speculation in Washington that Biden would do the same while in Europe. But the White House downplayed the possibility this week, noting the incredible security effort needed for a president to safely visit a war zone and the likelihood that Russia would be on high alert for a possible trip while Biden was already in Europe. Far more likely, aides have speculated, would be a covert visit at a later date.

And Biden will still be hearing from Zelenskyy, who is expected to virtually address both summits and deliver urgent pleas for the allies to continue to send weapons and money to his besieged nation.

“The United States needs to send a unified message of developed democracies’ support for Ukraine. Zelenskyy’s participation in the Summit should underscore that point,” said Jeff Rathke, president of the American Institute for Contemporary German Studies at Johns Hopkins University, “especially if the US and its Allies can show progress through new material commitments or measures to impose new consequences on Russia.”