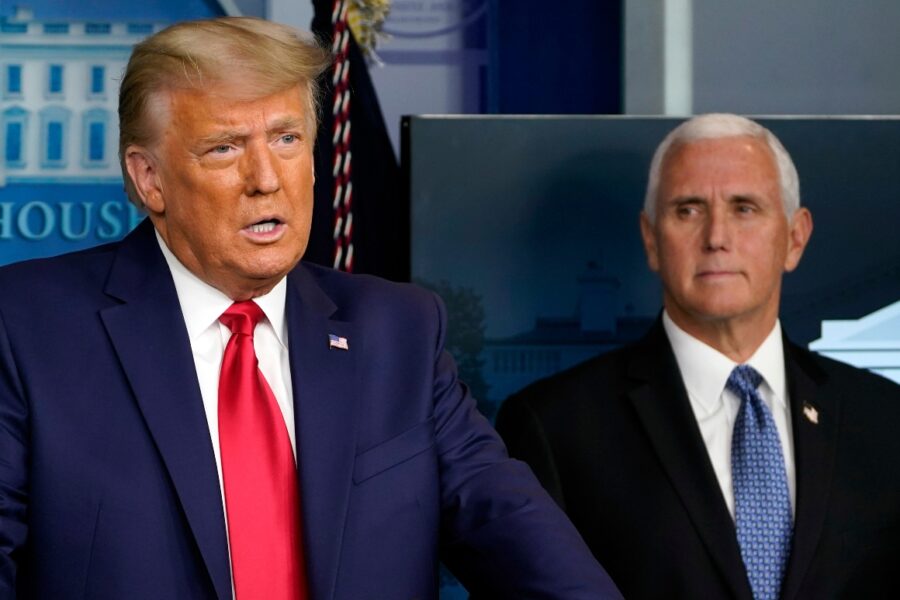 Congressional investigators entering the last stage of their probe are gathering new evidence about a crucial moment on the Jan. 6 timeline: the final, fateful phone call between Donald Trump and Mike Pence before a pro-Trump mob attacked the Capitol.

They’ve had a lot of success on that front — court records and Jan. 6 select committee documents reveal that the panel has obtained significant details about that call. In recent weeks, they’ve learned even more from several high-profile witnesses who were in the Oval Office while Trump berated Pence for refusing to overturn the election.

Yet one crucial gap remains. Top Pence aides say the former vice president was in his residence when the call came in. He then left the room and was out of earshot for 15 to 20 minutes. Those aides told the select committee that Pence never disclosed to them the contents of the conversation. More importantly, Pence’s aides say he never revealed how he replied to Trump’s intense last-minute pressure.

That gap of information looms as the House panel works to finalize a minute-by-minute account of Trump’s actions on Jan. 6, when he pushed Pence to prevent the transfer of power to Biden. Committee Chair Bennie Thompson (D-Miss.) has remained publicly undecided about whether to seek testimony from Pence himself, noting that Pence’s closest advisers have cooperated fulsomely. But investigators must also confront whether Pence’s side of that conversation — for which no Pence advisers were present — is significant enough to ask him to fill in the blanks.

It’s unlikely the committee will attempt to force Pence to testify. There are imposing legal obstacles for subpoenaing a former vice president, and the panel considers Pence a witness, not a target of their probe. Whether they ask for his voluntary help is another question.

An hour after the call, Pence would publicly declare what he’d privately told Trump for weeks: He would not assert unprecedented power to overturn the election. Barring some unforeseen twist, Joe Biden would be the next president. Aides who had been working all morning to finalize Pence’s statement delayed it to give Trump a chance to address his supporters, but the decision had long been settled.

But Pence’s words to Trump could be significant as congressional and criminal probes of Jan. 6 advance. A federal judge has concluded that Trump “more likely than not” criminally conspired to obstruct Congress’ proceedings to finalize Biden’s victory. He described Trump’s pressure campaign against Pence as “a coup in search of a legal theory.” The select committee has also argued that Trump committed multiple crimes as he leaned on Pence to subvert the election.

Jan. 6 call logs obtained by the select committee, revealed last month by The Washington Post and CBS, show that Trump first tried to reach Pence at 9:02 a.m. But the two men did not connect. The operator, according to those call logs, left a message at 9:15 a.m. Trump had already twice tweeted that morning that Pence had the power to stop Congress from finalizing Biden’s victory.

The logs don’t reflect Trump’s subsequent call with Pence, but a private schedule investigators obtained from the National Archives suggests the two men connected at 11:20 a.m. while Pence was in his residence and Trump was in the Oval Office. Pence’s chief of staff Marc Short and chief counsel Greg Jacob told the select committee that they remembered Pence receiving the call from Trump at about that time.

“[A]t some point during our meeting a military aide knocked on the door and said the President was holding for the Vice President, at which point he excused himself to take the call,” Short recalled.

“How long was he gone?” a committee attorney asked.

“Upon his return, did he share any details of the conversation with you?” the investigator asked.

Jacob also recalled that Pence left the room to take Trump’s call and agreed Pence didn’t brief them on it when he came back.

“The Vice President’s rule was never to divulge the contents of his conversations with the President,“ Jacob testified.

Shortly after hanging up, Pence traveled to the Capitol to preside over the joint session of Congress.

Pence’s apparent privacy hasn’t stopped accounts of the call from emerging. They’ve just all come from people who only heard Trump’s side of it.

The same private schedule showing Trump’s call with Pence also reveals who entered the Oval Office just minutes earlier, a group that appeared to be present while Trump made his final push to pressure his vice president. The list includes Trump’s adult children Ivanka, Donald Jr. and Eric, as well as Kimberly Guilfoyle, Donald Jr.’s then-girlfriend. Also in the room were White House aide Keith Kellogg, chief of staff Mark Meadows and counsel Eric Herschmann. Kellogg, who testified to the select committee, said he recalled seeing Eric Trump’s wife, Lara, in the vicinity, though she’s not listed on the schedule.

Multiple people familiar with the testimony given to the select committee about the call offered a consistent account. One of those people — granted anonymity to speak candidly — said witnesses described the conversation as beginning relatively pleasantly, with Trump embracing the legal advice he was given about Pence’s ability to send the election back to the states.

Although people in the Oval Office couldn’t hear him, Pence had clearly rejected Trump’s entreaties, the person indicated. Witnesses have said listeners in the room were surprised because it was the first time they recalled Pence saying no to Trump. The call deteriorated and Trump grew frustrated.

A portion of Kellogg’s testimony has become public in court filings and provided a similar recollection of Trump’s side of the phone call. Kellogg said he couldn’t hear Pence’s responses but remembered Trump pushing his vice president to embrace a fringe theory intended to stop Biden’s victory: sending the election back to a handful of GOP-controlled state legislatures to appoint new presidential electors.

Kellogg said he presumed Pence rebuffed Trump because Trump seemed disappointed. He recalled Trump saying something to the effect of: “You’re not tough enough to make the call.”

“I would say [he] was frustrated,” Kellogg told the committee. “He hung up. And after he hung up, we went right back to speech prep. He didn’t get up, walk out, yell, throw things. He just said okay and went back to the speech discussion.”

Kellogg also told the select committee that Ivanka Trump turned to him at the close of the call and said, “Mike Pence is a good man.”

Importantly, Ivanka Trump, Guilfoyle and Herschmann, the former Trump White House lawyer, have all recently testified to the select committee and were likely asked about their recollection of the call. Aides to all three did not respond to requests for comment.

But a harsher version of the exchange described by Kellogg has emerged in books and news reports.

The book “Peril,” by Bob Woodward and Robert Costa, describes some of Pence’s pushback on the call, quoting him as telling Trump, “I’ll do my job.” The comment reportedly prompted furious pushback from Trump.

The select committee has used those books as a rough guide for questioning witnesses, looking to confirm reported details. But it’s unclear whether the panel has collected more details on Pence’s final words to Trump that day.

Shortly after they hung up, Trump traveled to the Ellipse to deliver his remarks to the “Stop the Steal” rally he assembled in Washington to pressure Pence and Congress. He told the crowd that he had just spoken to Pence, whom he referenced a dozen times in his speech.

“All Vice President Pence has to do is send it back to the states to recertify and we become president and you are the happiest people,” Trump told the crowd.

“I just spoke to Mike. I said, ’Mike, that doesn’t take courage. What takes courage is to do nothing. That takes courage.’ And then we’re stuck with a president who lost the election by a lot and we have to live with that for four more years,” Trump continued. “We’re just not going to let that happen.”